Get your nerd on at these fun, funky gatherings. 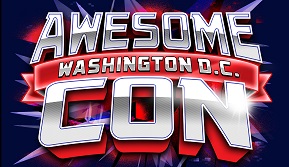 It’s like I’ve always said: You come to the Independent for info on books and writers, and you stay for the skinny on cons.

Hang on, hear me out.

Even if you don't read these genres, you've surely seen pictures of people milling around ballrooms dressed like fantastical characters from times and planets you can only imagine. You may even have seen them in person, riding the Metro in capes or carrying their lightsabers into a convention center.

So, what drives these people to dress this way outside of Halloween? And where are they going? And what do they do when they get there?

Full disclosure: I've been to a con, but I didn't dress up or engage in any role-playing in the game room, or "filk" (more on that later). What I did was visit really interesting panels and meet a whole new group of readers and writers and hear George R.R. Martin speak instead of work on his next book (like everyone wanted him to). But I'm hardly an expert in the field, so here to introduce us to the world of cons is Meg Eden, local multi-genre poet and writer — and con enthusiast.

Meg, what exactly is a con? How is it different from a traditional writer's conference?

A "con" is simply a special-interest conference. Whereas a writer's conference specializes in panels and events on writing craft and publication, other interest cons in the area specialize in topics including science fiction, fantasy, comics, nerd culture, anime, videogames, and more. For writers, these other cons are a great way to get your book out to a new audience.

What cons are there in our area, and which audiences do they appeal to?

There are so many cons I can't list them all here, but I know we have strong audiences for sci-fi/fantasy lit (including Balticon, Capclave, and Chessie con), comic and nerd culture (including Awesome Con, Ocean City/Annapolis/Baltimore Comicons, Cecil Con and Intervention Con), videogame culture (particularly Magfest), and anime/Japanese culture (including Otakon, Zenkaikon, CHS Otakufest, and Ravencon). These are the ones I've focused on, and if you do some Googling on other topics, I'm sure you'll find more than a few cons in the Baltimore/DC area for your interests.

What about the stereotypical image of people dressing up like comic-book or sci-fi-movie characters? How common is that in area cons?

That's definitely a thing, but also not representative of every attendee, or even every con. You'll always get a portion of people dressed up (this is strongest at anime and nerd cons), but many people go to cons to discuss academic and literary interests.

For example, Magfest always has panels from people in the videogame industry and academia that invite scholarly discussion of topics including game design, literature, and the future of games. Many people go to cons to exhibit demos of their videogame, or to promote a product. I go with business cards in hand, ready to network.

It mainly depends on the audience, interests, and age of the attendees. For example, Otakon attendees are more likely to dress up than Balticon attendees. Otakon's main appeal is for (largely) younger attendees, with more cosplay contests and a con culture of costuming. When I was a teen going to Otakon, my friends and I would dress up and walk around most of the time, going to very few events.

While Balticon does have a costume contest, it's a relatively small feature compared to its huge line-up of panels on sci-fi/fantasy lit and industry topics. A con's website can help give you a sense of the values and focus of the con.

What would you say to the casual genre reader — are cons only for diehard fans?

Not necessarily. I find cons a great way to reach a larger audience with my book. For example, my novel Post-High School Reality Quest is about a girl stuck in a text-adventure game. I bring this to gaming cons because of the intersection of gaming and reality. I bring it to sci-fi/fantasy cons because one of my blurbers compared it to Hitchhiker's Guide to the Galaxy.

I find, as a reader, that cons allow me to think outside of my genre, and give me new ideas for my books. I recommend looking at the schedules on con sites and seeing what panels might interest you. I'm always surprised by what I learn and who I meet at cons, and how later down the road I see the benefits of what I learned.

How about from a writer's perspective — we must have some sci-fi/fantasy/comic authors out there. How do panelists get on the program for these kinds of cons?

Each con is different, so the first thing to do is research the websites. Some cons have a form to fill out with specific panel ideas, while others require you to email them to ask about the process. Some want you to propose a specific panel with panelists and a blurb, while others just want to know your interests and allow you to choose from predesigned panels. So, do some research, send lots of emails, and see what happens!

And on a personal note — how did you get interested in cons, and what keeps you going back?

I grew up on cons! As a teen, I was very much into anime and went to cons like Anime USA and Otakon. I was a visual artist then, so I'd get tables to sell my art. As I focused more on my writing, I thought: Why not apply those interests to my writing career? I started getting tables and panels for my books. My husband and I go to Magfest every year and love it — he's a game programmer, so we come at the panels from different backgrounds and always have so many ideas to discuss. Plus, Magfest has a free-to-play room of arcade cabinets, which is really fun.

Thank you, Meg! And with all that, I just realized we didn’t get to “filking.” Find out more about it here.

Meg Eden's work has been published in various magazines, including Rattle, Drunken Boat, Poet Lore, and Gargoyle. She teaches creative writing at the University of Maryland. She has four poetry chapbooks, and her novel, Post-High School Reality Quest, is from California Coldblood, an imprint of Rare Bird Lit.

Test your knowledge of DC-area literary festivals and conferences.