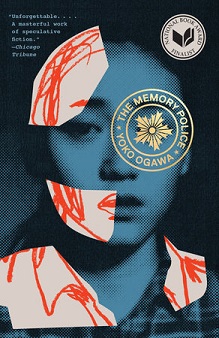 Yoko Ogawa’s The Memory Police, which came out in paperback last July and was shortlisted for the 2020 International Booker Prize and the 2019 National Book Award, sets up its conceit right at the start. Even before, really. Its cover image is a photograph of a woman’s face with parts “erased” into shards of line drawings.

The theme of loss, which literature often handles gauzily or tenderly, gets a more aggressive treatment here. It brings to mind lines from Elizabeth Bishop: “so many things seemed filled with the intent/ to be lost that their loss is no disaster.”

And as in the Bishop poem, Ogawa steadily raises the stakes. (“Then practice losing farther, losing faster.”)

Described as “a haunting Orwellian novel about the terrors of state surveillance” on an unnamed island, The Memory Police is about the losses we pile up individually as much as it is about what happens when an authoritarian body takes over. As common items start to disappear around them, the few people who can still recall that those items once existed grow ever more fearful.

Every time Ogawa takes the story in a metaphysical direction, she brings the reader along for the leap with a crisply observed detail. Early on, she evokes the narrator’s parents not with a sentimental goodbye but with a casual father-daughter exchange:

“When it was time for me to go, he would walk with me as far as the bus stop. At a spot along the road where the creatures came to feed, I would pause to crumble one of the cookies I’d received from his assistants. ‘When are you coming home?’ I’d ask him.”

As the Memory Police start enforcing the disappearance of everyday objects from people’s conversations and thoughts, the effect is more poignant than terrifying. Here, the reader gradually decodes from an accretion of clues the lost item being described, like in a game of charades:

“‘This one is thin and small but it’s important. When you had something you wanted to tell someone, you would write it down on a piece of paper and paste this “stamp” on it. Then they would deliver it for you, anywhere at all. But that was a long time ago…’ Ribbon, bell, emerald, stamp. The words that came from my mother’s mouth thrilled me.”

The narrator, a writer who uses her craft to keep memories alive, meditates on those losses in ways that can feel abstract, like when she worries “the island will soon be nothing but absences and holes, and when it’s completely hollowed out, we’ll all disappear without a trace.” But then her editor responds with a precise, personal dig at her novelistic imagination, yet soon apologizes for his outburst. Such exchanges kept me solidly within the strange world conjured by Ogawa.

Later, a police interrogator pauses in his line of questioning long enough for the narrator’s attention to drift outdoors:

“I could see the streetcar running outside the window. As it turned the corner, a layer of snow slid from the roof. However weakly, the sun was shining for the first time in many days, and the glare from the snow was blinding. Outside the entrance to the bank across the way, people were lined up to withdraw money.”

In another scene, a mundane conversation about seasons — the shifting winds and budding trees, the lightening hue of the sea — gets jolted by a character’s passing comment: “Think about it. With the calendars gone, no matter how long we wait, we’ll never get to a new month…spring will never come.”

As she draws the net tighter, the author carefully balances the micro with her narrative macro. The emotional wear on everyone becomes a major consequence of the erasures. Besides eroding their knowledge, it becomes clear, these lost memories diminish the characters in ways that shake their essential selves.

The timing of The Memory Police’s paperback release last summer — alongside the rise of authoritarian regimes around the world and the disinformation campaign that was the U.S. presidential election — makes it especially memorable. It’s a sharp social commentary that chills most deeply when it’s being most intimate.

David A. Taylor’s books include Soul of a People, about the WPA writers of the 1930s, and Cork Wars: Intrigue and Industry in World War II, which received an Independent Publishers Book Award for world history. His short story “Guys Like That” appears in the anthology This Is What America Looks Like. He teaches in the Johns Hopkins Science Writing Program.