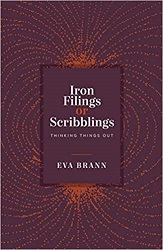 Although author Eva Brann is a world-class philosopher, she’ll say she’s not a scholar, academic, or professional intellectual. “I’m a teacher” is the only attribution she’ll agree to. A tutor at St. John’s College in Annapolis, Maryland, and having taught for 62 years (once dean for seven years), we can believe she’s earned that title.

Thought is a personal creative experience and it’s only as good as its thinker. The chapters in Brann’s newest work, Iron Filings or Scribblings: Thinking Things Out, reveal a single human endeavor by one person who doesn’t shy away from judgments; a writer who has distinct perspectives and who’s earned her stripes in the fields of antiquity, classicism, history, and our literary culture.

“I like to work” Brann says. As its subtitle states, Iron Filings or Scribblings is a way of “thinking things out,” and its 33 chapters include fresh ideas, beliefs, and perceptions about countless topics (even the topic “Of Topics”).

“Of Faith,” “Of Self,” and “Of Playfulness” are some of her subjects. She sources “of” to a Latin word meaning “behind cognition”; the Latin verb co-agere means literally “to drive together.” Brann borrowed this from the way the “master of the English essay,” Francis Bacon, began his essays.

The sections are a journey of change and speculation, supposition and strong opinion. After reading the whole, we feel Brann reinforces the best in us.

“Of Gods”: Brann concentrates on images, idols, and monotheism and focuses on her specialty, the Greek gods. “As creatives we are indeed idol-makers.” Brann’s personality and flair, as well as her authority, trigger reactions. The best kind of writing does that.

“Of Sensibility”: This is one of the richest chapters, where Brann takes up the very meaning of “sensibility,” a word little used today. She examines vulgarity and good taste. She speaks of self-restoration and hospitability to others.

The author points to three aspects of sensibility (after eight pages of other aspects): a culture of senses (esthetic); a culture of feelings (ethics); and a culture of utterance (expression). These are huge ideas you’ll wish to read fully for yourself. My favorite portions of this essay are the “problems.” Here’s one: “Where does a taste, my taste, so at once constrained and engrossing come from?”

“Of Beauty”: “initial” and “consequential.” Brann uses classical Greek references to serve as the frame/example for each discussion. In this essay, it’s a Platonic dialogue. She moves to broaden and deepen “beauty shining,” meaning beauty as visibility. This section explores Eros, emotionality, desire, and passion.

(An aside: As extraordinary as this sounds, once a blind woman on a long train ride asked me what beauty was and if she “looked that way.” If I’d known this essay, I’d at least have had language with meaning to draw on.)

“Of Teaching”: “Real listening, therefore, that is hearing, encourages answers. The notion that question-asking, endless discomposure of the mind, is an end in itself is really unsound.”

“Of Scandal”: “What makes the specter of scandal so gruesome just in imagination? Perhaps it’s the melding of social and personal degradation. Socially: the casual assumption of ordinary respectability is withdrawn, the unquestioned extension of social credit is closed off…

“What draws me to scandal in shivering fascination is the element of exposure…All eyes are trained on you, not to observe the outer figure, but rather to pierce the spatial person and to drag forth the inner being in its nakedness and display its defects to public pity or avidity.”

“Of Friends”: “If the imagined and the dead are allowed among possible friends, then two notions whose potency is much overrated — existence (being here and now) and time (as a differentiating force) — are happily a little nullified.”

The sections “Of Novels,” “Of Freedom,” “Of Passion,” and “Of Property” are my favorite rereads. I forgot “Of Friends” and “Of Decency.” Well, truthfully, it changes by the day. I’ve learned and loved so much through these readings.

No surprise, Brann ends her book by quoting Socrates: “We ought to repeat twice or thrice over whatever in our account holds good.”

“That’s what I’ve done — assuming that something does hold good, and so nothing in these pages is new but the styling of it. I’m past novelty; it’s all recollection and revival. Finii — I finished...while listening to Dvorak’s Requiem.”

This book is a lyrical debate in which Brann is always figuring out what makes us human, using story, anecdote, myth, tradition, logic, and knowledge of other cultures. She struggles with the known and the unknown, puzzling things out before our eyes so that ideas multiply on the page as we watch. It’s a rare gift to make what belongs to the writer belong to the reader, but she can do that. And with emotional energy and great range, she’s on the right side of language.

A new book of essays by Brann is on its way to publication. So, as we close this book, we already look forward to another startling work by one of America’s most beloved living philosophers.

Grace Cavalieri is Maryland’s poet laureate. She founded and hosts “The Poet and the Poem” for public radio, recorded at the Library of Congress and celebrating 42 years on air. Her newest chapbook of poems is Showboat.