A review of The Impossibility of Palestine: History, Geography, and the Road Ahead by Mehran Kamrava, and Israel: A Concise History of a Nation Reborn by Daniel Gordis 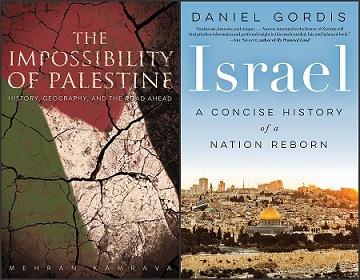 In the aftermath of World War I, as Allied leaders were deciding the fate of Arab lands freed after centuries of rule by the Ottoman Turks, President Woodrow Wilson sent a delegation known as the King-Crane Commission to the Middle East to review the situation and make recommendations.

In its report, the commission concluded, among other findings, that fulfilling Zionist aspirations to create a Jewish national home in Palestine would violate Arab rights, would be strongly opposed by all Arabs, and could not be achieved without violence.

Three decades and another world war later, President Harry S. Truman had to decide what should be done with the land of Palestine when Britain surrendered its international mandate there in 1947. Analyzing the question at Truman’s request, the newly created Central Intelligence Agency reported that partition of Palestine into Jewish and Arab zones, as the United Nations was considering, would inevitably lead to war between Jews and Arabs and would undermine the security of Jews then living in Arab countries.

Both assessments were correct: The creation of Israel did lead to war, not one war but several, and to longstanding conflict between Israel and the Arab nations. Today, as these two fascinating new books make clear, that conflict is over. The Jews won; the Arabs lost.

In the words of Mehran Kamrava, author of The Impossibility of Palestine: History, Geography, and the Road Ahead (Yale University Press), “The Palestinian struggle for statehood has been lost. Israel has won.” In Israel: A Concise History of a Nation Reborn (Ecco), author Daniel Gordis writes, “Israel has more than survived — it has flourished” after prevailing in “one of the great dramas in the history of humankind.”

Kamrava’s assessment may seem premature, given that the United States and other members of the U.N. Security Council still favor a “two-state” solution, under which independent Jewish and Arab countries live peacefully as neighbors. But he makes a powerful argument that such an outcome is no longer possible because Jewish settlements in the occupied territories, Israeli militarization of the Jordan Valley, and the political and economic fragmentation of the Palestinians have put it out of reach.

Kamrava, a professor of international studies at Georgetown University’s campus in Qatar, offers the novel argument that the Palestinians sealed their own doom when they accepted the Oslo Accords of the 1990s. Those agreements were hailed at the time as a historic breakthrough to peace, and produced the celebrated White House handshake between Israeli Prime Minister Yitzhak Rabin and Palestinian leader Yasser Arafat.

In reality, Kamrava writes, the prospect of peace and independence remained an illusion because the Israelis, who refused to yield the West Bank even under extreme pressure from President Jimmy Carter at Camp David in 1978, were not going to hand it over to Arafat the erstwhile terrorist. By giving the Palestinians fragments of autonomy, Oslo neutered the Palestinian leadership, as its members abandoned their national struggle in favor of protecting the few scraps they had.

“The Oslo Accords,” in Kamrava’s analysis, “made Palestinian sovereignty over the Occupied Territories all but impossible, carving up the West Bank and ceding control over much of it to Israel and having both the West Bank and Gaza fenced off from Israel and thus unable to function as viable economic or political entities.” As a result, “Palestine, as we have conceived of it for so long, is no longer feasible.”

What, then, is to be the fate of the Palestinians? In his view, the Palestinians will become more and more like the Tibetans: a distinct people with a clear sense of their own identity and culture, but without a country, second-class citizens living under the subjugation of those who invaded their land and conquered them.

Kamrava is unsparing in his analysis of the weaknesses and divisions within Palestinian society that made them vulnerable to subjugation, but he is equally unsparing in his dismissal of Israeli claims to have improved the lot of the Palestinians through education, employment, and advances in agriculture. Those, he says, are “self-serving justifications” that the Zionists adopted, just like all other invaders and colonizers.

Israel: A Concise History of a Nation Reborn by Gordis (a prominent Israeli scholar and author), offers a different perspective: The Zionist dream of recreating the nation of Israel and its achievement against daunting odds represent a triumph of courage, determination, and idealism. When Theodore Herzl presided at the landmark Sixth Zionist Congress in 1903, even his small band of believers could not have imagined what Israel would become: an economic and military powerhouse where Jews of all ethnicities determine their own fate.

Israel’s power, Gordis writes, is both the result and the cause of the fact that “Jews today are not the cowering, fearful Europeans of yesteryear,” victimized in pogroms, shunned by their neighbors, driven from their villages.

Although often divided against each other — Herzl vs. Jabotinsky, European Jews vs. North African, Labor vs. Likud — they succeeded because they never relinquished their common heritage and shared aspirations. But Gordis recognizes that there is another side to this uplifting story and that much of it is subject to interpretation. Zionist ranks included “the well intentioned as well as the malevolent,” he writes. The story of Israel “is the story of a people reborn, but at great cost.”

Gordis is a wonderful storyteller, and his book is filled with fascinating anecdotes. Even those familiar with the oft-told tale of Israel’s renaissance may be enlightened by his account of the 1903 pogrom in Kishinev, in what is now Moldova, and the influence upon the world’s Jews of “In the City of Slaughter,” an epic poem about it by the Hebrew-language writer Chaim Nachman Bialik.

Everyone interested in Middle Eastern history knows about the Balfour Declaration and Camp David, to pick two examples, but how many know the story of Haim Arlosoroff, the head of the Jewish Agency’s political department in the early 1930s? That young man, according to Gordis, had an affair with the woman who later married Joseph Goebbels, the notorious Nazi propaganda minister.

Using contacts through her, he negotiated a deal to allow German Jews to leave Germany and go to Palestine with some of their assets, which would then be used to purchase goods from Germany. David Ben-Gurion defended this plan, but other leading Jews denounced it as a pact with the devil. Arlosoroff was knifed to death while walking with his wife on a Tel Aviv beach in 1933. His assassin was never identified.

The irreconcilable perspectives of these two worthy books can be seen in their brief accounts of the Arab revolt of 1936-1939. In Gordis’ version, the Arabs benefited despite the violence because the British sought to “appease” them by limiting Jewish immigration. To Kamrava, the revolt had “devastating consequences” for the Arabs: “Over 10 percent of the adult male Palestinian population was killed, wounded, imprisoned, or exiled. The revolt also left the Palestinian economy in tatters, measurably worsening the economic situation of many landowners and damaging numerous businesses…by the revolt’s end, Palestinian leadership was also shattered, resulting in weaknesses at both the top and the base of Palestinian society.”

For all their considerable merit, each of the books is marred by one serious flaw. For Kamrava, it is a sometimes ponderous academic writing style, in which exposition overpowers drama. For Gordis, it is a near-total reliance on secondary sources, even when documentation is readily available. This weakness is most evident in his much too brief account of the crucial 1973 war. Any competent researcher nowadays can find abundant primary-source material about that event, right down to transcripts of Henry Kissinger’s telephone conversations and State Department memos revealing President Nixon’s loathing for Golda Meir. Gordis cites only books and articles by other scholars.

In short, Kamrava’s book is excessively academic, Gordis’ insufficiently so. Those defects do not negate their value, however. To read them is to understand how we got to where we are in the Holy Land, if not where we are going.

[Editor’s note: Mehran Kamrava will speak about The Impossibility of Palestine on Tues., Nov. 15, at 6 p.m. at the Center for Contemporary Arab Studies, 241 Intercultural Center, 37th and O streets, NW, Washington, DC. Click here for info.]

Today's commentary is the second of two reviews by Ronald Goldfarb on the vast number of Kennedy assassination books prompted by the 50th anniversary of that terrible event.