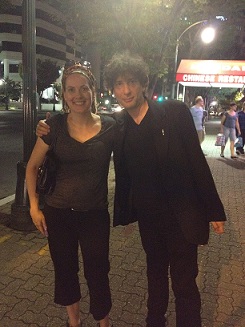 Not over movie stars. Not even over rock stars. My family is what one would call reserved when it comes to the squee-factor. We don’t jump up and down, we don’t point, we don’t blush and stammer. It’s not really our thing. Spock-like. That’s us. I proudly carry my Spock card with me at all times.

I’ve always said that if I were hypothetically going to fangirl it would definitely be over writers. Which is funny because with a few notable exceptions, authors aren’t exactly high profile. I mean, if they didn’t wear a nametag at conferences, I wouldn’t be able to pick most of my favorites out of a lineup.

So imagine my surprise when I’m having dinner with a friend in one of my favorite little Indian restaurants and I look over to see Neil Gaiman and his entourage sitting at the next table.

Now, the fact that I recognize him is nothing short of a miracle. I am not kidding when I say that I wouldn’t notice if Brad Pitt and Angelina Jolie sat at a table next to me. It’s not that I wouldn’t see them, but recognize them? Mmm, no.

Maybe it’s because I’m taken completely by surprise, but my heart starts to pound. For a second I wonder if I’m having a heart attack.

I casually lean in to my friend and whisper, “Is that Neil Gaiman by any chance?”

Then she surprises me.

“Whaaat???” My screech can probably be heard several blocks away. I lower my voice. “What do you mean, who is Neil Gaiman?”

“He’s. A. Writer.” Let me tell you, I had a smidge of indignation in my tone. I thumb through my phone until I could call up some online pictures. I hold it out so she can see them.

She glances at his table and then the phone. “Yep, that’s him.”

My heart starts to pound even harder. Now, let me say that I’m a Neil Gaiman fan. Obviously. But there are others. Lots of others. I’m not sure what it is about him that gets my heart racing with such vigor, but I decide to go for it. I mean, how hard could fangirling be, right?

Well, it’s not as easy as it looks. For one thing, I can’t imagine going over to his table. I always thought it would be so annoying to have your every meal interrupted by fans. I could be wrong. Maybe he loves it. But somehow I just feel weird interrupting. So, I purposely ignore him and finish my meal.

The whole time my heart is thumping away in my chest, but I don’t know what to do about it. I’m not exactly shy, but I also don’t normally get sweaty palms when meeting someone.

Well, that’s enough of fangirl 101, I say to myself. I mean, I don’t want to take it all on at once or anything. Let’s not get crazy.

So I play it cool. Neil Gaiman? No biggie. I got this. Spock-like cool. I’ll just tell my husband later that night that I saw him. He’ll be surprised and envious and then I’ll move on. Yep.

Except we finish our meal at the exact same time as Gaiman’s entourage. We all stand up together and my cool-as-a-cucumber façade crumbles.

“Are you Neil Gaiman?” I blurt before I can suck the words back into my too-big mouth.

He smiles. He has a nice smile. He’s with his beautiful wife. She also smiles, indulgent.

“Uh, my friend’s teenaged son” — I point to her trying to take the heat off me — “loves your work. Do you think I can take a picture of you two so I can send it to him?”

This is all true. Her son is a big Neil Gaiman fan. He would flip out seeing a photo of his mom with Neil Gaiman. Fangirling by proxy. A way to keep my Spock card and still get to fangirl. Excellent.

He kindly agrees and we move out of the restaurant and onto the sidewalk to stand under the streetlights. I take a few pictures of them, which I promptly post to her son’s Facebook page.

“Would you like a photo with me, too?” he asks.

“Uh…” Wait, this wasn’t supposed to happen. Fangirling by proxy, remember? I could have my Spock card removed for my next reaction.

“Really?” Okay, now bring that “really” up several octaves when you say it again, and you might come close to the pitch I hit when I said it. I had just had my first official squee.

It’s a slippery slope. I went sliding right down that hill on a toboggan built for two. I might have even jumped up and down. Honestly, my memory is a little fuzzy at this point. It might have been due to lack of oxygen since I forgot how to breathe. I hope I didn’t knock over any of his entourage in my fangirl-induced haze. If so, oops. Sorry.

Anyhow, the way I remember it, I move next to him and wait for my friend to take the photo.

“Do you want to stand next to me?” He smiles.

I apparently still had a little reserve because I stood several feet away like he had some contagious disease.

I still don’t move. He takes a step closer and leans into me. A couple of snaps later and he and his crew are on their way. Oddly enough, he doesn’t ask if we want to hang out, become besties, and live next door to each other.

I thank him and wave. My hands are shaking from all the adrenalin. Wow, I just had my first fangirl moment.

Upon seeing the photo later I realize I still have a long way to go to reach full fangirl glory. My friends who are good at it have these fabulous photos where there isn’t an inch of space between them and their fangirl fantasy. Not so much with us. But I do look happy, so I suppose that’s something.

Er, but I’d appreciate it if we kept this little story just between us because if my parents or brother find out, I’ll lose my Spock card for sure, and I’m rather fond of it.