Guess what? You’re probably not. 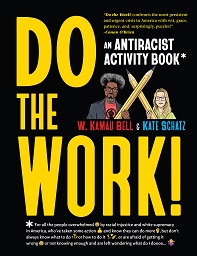 We’ve all heard these terms in the last few years, and for many of us, they send ripples of anxiety (which they should). But what do they mean, and how do they pertain to us?

In Do The Work!: An Antiracist Activity Book, authors W. Kamau Bell and Kate Schatz explain how systemic racism evolved in our country and how it’s been “whitewashed” to become unrecognizable. The book is “a bridge between essential reading and critical action.” This workbook is not just for white people but for anyone wanting to learn about hidden prejudices and institutional racism — and how to eliminate them.

History books are only as accurate as the authors who write them. I didn’t learn about systemic racism in school or for many years thereafter, but I got a small understanding of what the term means from Alyssa Cole’s When No One Is Watching. Although a thriller, the novel explains how various factors (products of white privilege) drove Black people from their homes in Brooklyn, eventually allowing gentrification to take over. Reading Cole’s book was eye-opening for me — and sobering because I didn’t already know these things.

Bell and Schatz include the historical facts behind white privilege and systemic discrimination in the U.S., including a timeline explaining how the institution of slavery was first created in America, and how the government passed laws to keep people in bondage. From voter-suppression tactics (such as requiring people to pass insanely hard literacy tests to qualify to vote) and the redrawing of real estate and electoral maps, to the way advertising has been skewed toward white cisgender people, racism is embedded in our nation’s fabric.

We benefit from privilege “when our experiences are the norm,” such as when:

Privilege is “the given” that white, straight, able-bodied people take for granted.

Did you know about the following state laws from the Jim Crow era?

Do The Work! also explores some of the hurtful words and phrases that have been normalized, such as “Jew down,” “master bedroom,” and “Indian style.” If you don’t understand how these terms are painful, you’ll benefit from reading this book.

Bell and Schatz offer suggestions on how to talk about racial issues, how to react when we witness racist behavior, and how to fix our own racism when we mess up — which we will — without getting defensive. Talking about race and privilege is hard.

Some of the graphics in the book are a little skewed to make a point, but the point is well taken: The everyday existence of white, able-bodied, cisgender people is saturated with privilege, and we need to change that.

The workbook also includes puzzles, coloring pages, removable cutouts, and a reference list of over 75 works about understanding racism and privilege throughout history. Although this guide may be hard for many white people to read, we need to Do The Work!