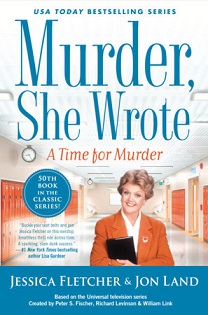 Who knew I was a “cozy” fan? I didn’t. At least, not until I read several of Jon Land’s Murder, She Wrote novels. What sets these books apart from cozy mysteries is that they’re actually “cozy thrillers.” I love stories in which a female protagonist is rocking it (especially when she’s even older than me).

According to Land, who took over penning the books after the series’ previous author, Donald Bain, died in 2017, “Cozies have established formulas that were very difficult for me to emulate. What I created was something we can call the ‘cozy thriller.’ I’m striving to preserve what readers love most about Murder, She Wrote, while adding the pacing, suspense, and plotting they may have seen before in thrillers.”

Believe it or not, A Time for Murder (Berkley) is the 50th book in the Murder, She Wrote series. To commemorate the anniversary, Land introduces readers to a young Jessica Fletcher, taking us back 25 years to her first investigation.

The story begins with a woman interviewing Jessica about her past; namely, her time as a substitute teacher in Appleton, Maine, and the first homicide she investigated — one she’s never discussed with anyone. Now, a murder in the present is mysteriously connected to that killing a quarter-century ago.

Land expertly transports readers to Cabot Cove, Maine, where we can imagine sitting at a Formica-topped table at Mara’s Luncheonette, bantering back and forth with Sheriff Mort Metzger and Dr. Seth Hazlitt over a piece of apple pie. Can Jessica untangle the clues before the killer acts again?

For both those who already love Jessica and those just getting to know her, A Time for Murder takes us to the very beginning of her married life and career. We finally get to know Jessica before it all started — when she was a substitute English teacher in Appleton, raising her nephew Grady with her husband, Frank.

That’s when her first murder investigation happened, with help from a then-young Detective Amos Tupper. Because she didn’t want to tarnish her memories of her idyllic life with Frank, she’s never shared the story with anyone. Until now.

Interestingly, Land has set the recent Murder, She Wrote novels in the present, including modern-day necessities such as cellphones, Uber, and 24/7 news feeds. Jessica isn’t living in a 1980s vacuum but in today’s world, where she is more relevant than ever before.

So, how does Land get into Jessica’s head while he’s writing? He explains:

“I write from the inside out, not the outside in. I’m always seeing things from the perspective of my characters and understand this process enough to stay out of the way of the story. By doing that, I’m relying on characters to not just drive the story, but also tell it. First-person forces me to ‘find’ my hero’s voice and that gets me into her brain, as well. I’m learning things about Jessica at the same time she’s learning things about herself.”

Here are some fun facts about Jessica that we discover in A Time for Murder:

Besides the fun of following Jessica through her investigation, her transformation from one career to another — teacher to mystery-writer/sleuth — shows women of all ages that we can be who we want to be regardless of age. It's never too late.

Although I never thought I was a “cozy” enthusiast, when I read Murder, She Wrote books, I can’t help but consider clues alongside Jessica as I have fun putting on my investigator’s hat and racing her to figure out “whodunit.”

(P.S.: When it came to A Time for Murder, I couldn’t. Figure it out first, that is. If you don’t think you’re a “cozy” fan, you might just surprise yourself.)

K.L. Romo writes about life on the fringe: teetering dangerously on the edge is more interesting than standing safely in the middle. She is passionate about women’s issues, loves noisy clocks and fuzzy blankets, and HATES the word normal. Find her on Twitter at @klromo.

The real story of Lizzie Borden