Theft by Any Other Name…

If you didn’t pay for that e-book, you stole it 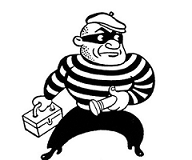 I had intended this month’s column to be about the results of my efforts with my new release/audiobook. But sometimes issues come to the fore that just need to be addressed.

In the last week, I discovered that my gay fantasy romance novel, By Fairy Means or Foul, is now on several pirate sites. I can’t tell you how much this aggravates me. In the past, I’ve taken the approach to mostly ignore those sites because I assumed that anyone who didn’t have a problem stealing my work probably wouldn’t buy it anyway. Also, sending cease-and-desist letters is time-consuming and often futile.

Recently, I’ve begun to rethink this idea. A column by Alison Flood, the Guardian’s book reporter and the former news editor of the Bookseller, argues that with 17 percent of e-books being pirated, it puts writers’ futures in jeopardy.

And while it may not much affect the bottom line of Nora Roberts, Stephen King, or Neil Gaiman, it can very much affect the lives of what were once termed “mid-list” authors. Maggie Stiefvater is one such author. She blogs about the piracy of one of her books and how it almost meant her publisher pulling her popular series.

I’ll be honest: As a short-story mystery writer, I rarely thought about piracy. I did have one short story pirated, but a much more seasoned colleague said, “Welcome to the club, kid. You made it.”

And though the idea of piracy irked me then, it didn’t affect my bottom line because usually my short stories are bought by publishers for a one-time payment. I also naïvely assumed it was a fairly rare occurrence. So, I grumbled but let it go. Barely.

This is not the case with my e-books. Every time a book is uploaded to a pirate site, that’s countless sales lost. It hits me in my wallet. Moreover, after all the blood, sweat, and tears I’ve put into these pieces, it steams me up that someone steals them from me. Makes me gnash my teeth and stomp my feet, like some creature straight out of Where the Wild Things Are.

It also, unfortunately, means I may not be able to keep writing these books. Writing is a business, and as much as I do it because I love it and need the creative outlet, I’m not doing it for free. I need to not only recoup the money I invest in my work, but ideally make something for my effort.

There seems to be this popular misconception that writers are just rolling in dough. I assure you: for 99 percent of us, this simply isn’t true. So every theft of an author’s work makes it that much more likely that we’ll have less time to spend on that beloved book or series because we’re off doing other things in order to pay the bills.

In the last week, in addition to finding my book on pirate sites, I also watched a conversation unfold from a romance blogger’s Facebook group claiming they had no ethical dilemma reading, and then selling off, the e-book advanced reader copies authors entrusted them with. You want to see authors foam at the mouth? Talk about selling their e-book ARCs.

ARCs are given to a reader or blogger with the explicit understanding that they are not to sell or share the book with anyone. They’re obligated to then review it and to NOT share it. If they sell it, they are making money off the author’s hard work, while the author doesn’t receive a dime. That’s called stealing.

The excuses for why someone feels free to steal from authors range from, “I just don’t care,” to “authors should feel grateful anyone’s reading their work,” to “one book won’t make a difference,” to my personal favorite, “it’s just writing. Anyone can do it.”

It’s a telling statement that some readers don’t seem to care if their favorite authors can actually afford to keep writing, much less make a living at it. It’s also a bellwether for how we treat the arts more generally. That, more than anything, concerns me. I hope it concerns you, too.

Settle in and stay awhile!

The ARC and the Covenant

Getting an advance peek comes with an obligation.