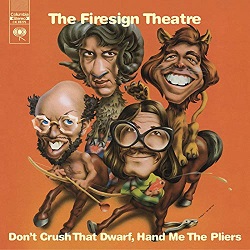 Sometime in the fall of 1982, I put the needle down on the spinning vinyl record. The theme from “2001: A Space Odyssey” rose:

“I don’t know how you came by this record, but you are now embarked upon a journey that must certainly lead you to change your life forever. If you were never a special person, you are one now. Hello, Seeker!”

I was 17 when I first heard this brazen call, this very public pronouncement from the comedic troupe Firesign Theatre’s album, Everything You Know Is Wrong. When I heard it, I did begin a journey that certainly did lead me to change my life forever. “There’s a seeker born every minute.”

And by taking their journey with them, I let them guide me to my own — and a perpetual enlightenment. I hardly understood what they meant half the time, but something profound emerged every time I listened to that record and their various other works.

But I did get away from the Firesign Theatre as I lived my life. I had kids, and my wife refuses to take anyone’s journey but her own. So I took other journeys. We traveled and explored — and always and everywhere I heard the madness and expressed myself in the obscure, ridiculous Firesign mode. I worked at customer service in banking and bicycle messaging. I went for my master’s when I was 35.

And I discovered that Dante made the same call as Firesign. He promised, and he delivered, to take every pilgrim on their pilgrimage with him, and, by this, Dante personally guided me to another enlightenment. I’ve spent the last 17 years studying him and remaking his 13th-century Florentine story into a 20th-century American one. And I knew I could do it because I’d seen what brazen incandescence can do.

It makes you laugh.

Dante wanted to make you laugh (people playing trumpets with their assholes, for example), but I parted ways with him over morality. He wanted “should” to have ultimate power, to lead one to salvation. I wanted irony: not what should happen, but what does happen.

And that was the Firesign Theatre’s take, too. They thought, wrote, and acted as if perfectly ridiculous, uncanny, and surreal were the status quo. Dante wanted things to get better, for people to be better. With Firesign, there was none of that.

That’s because America, the kind of commercialized, mind-warping cultural wasteland of mass entertainments, of California in the 60’s and 70’s, was inherently ridiculous. A secular, materialistic, hypocritical, environment-destroying culture of changing channels and apocalyptic babble was inherently ripe for mockery. The complacency that the Firesign Theatre rejected offered them the structure to destroy the world created for them.

And I mean that.

Ask Jon Stewart about the Firesign Theatre. Ask Stephen Colbert. Ask David Letterman. They know. Nobody outdid the Firesign. They pilfered from everything; Nothing was off-limits. Everyday life was both the source of the humor and the butt of the joke. They destroyed narrative structure in order to reveal narrative. They were the ultimate post-modernists.

You didn’t have to come down on any particular side to make fun of everyone during that period. And when you set your equal-opportunity lampooning to music, you seek the highest reaches of what entertainment can do. They wrote ridiculous songs, such as “Marching to Shibboleth,” which has the line, “Zion, oh mighty Zion, your bison now are dust.”

There’s the “Holygram Song”: “Don’t be afraid, little people, ‘cause we’re just Holygrams.” And “High School Madness”: “Porgy Tirebiter, he’s a spy and a girl-delighter, Porgy Firefighter, just a student like you.” And “Gas Music from Jupiter.”

Don’t get me wrong. I love Monty Python. All props to them…No question about the Pythons, but America had its own Monty Python in the Firesign Theatre. I can’t go to my grave thinking that Americans will continue to overlook their hilarity, insight, and brazen incandescence.

(Of course, the Firesigns gave credit to Spike Milligan and the Goons.)

So, the idea, I suppose, is to find what you love and carry it on. That seems to be what the Firesign Theatre did. I remain amazed at their vision, their intent to be deep and insane, to destroy everything and pay homage to it, to create art that would last for as long as there were people to hear and understand it.

Might we not listen (or watch) again to hear a prescient interpretation of the future from the past which resonates in the today?

A pair of columnists contemplate The Haunting of Hill House.