The World of Barry Unsworth

Reading a literary master in the time of covid-19. 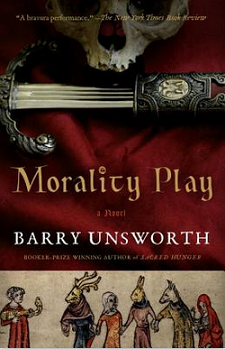 Like many readers, I was enthralled with Barry Unsworth’s 1992 Booker Prize-winning novel, Sacred Hunger, though I probably waited for the 1993 paperback version, which is what we did back then. When Unsworth died in 2012, Wall Street Journal book critic Cynthia Crossen called the epic of the Liverpool slave trade his masterwork.

Over time, I accumulated several other novels by Unsworth, which, like so many other books, sat on my shelf unread for years. Until covid-19. They have proven a source of richly oxygenated air to relieve the thin adventure thrillers I’ve been binge-reading during the pandemic.

After Hannibal, a small book set in contemporary Umbria, appealed to me because I’ve vacationed in this beautiful Italian province just north of Rome. Unsworth made his home there for years and died in Perugia, its capital.

Unsworth is known as an historical novelist, but the characteristics of his writing — a pronounced literary quality in the prose, the sharp observation of human behavior, the attention to arcane detail — are all evident in this 1996 work, too.

In this novel, it seems he is getting even with some of those who made his life as an expatriate in Italy difficult. There is the fraudulent property manager, the dissembling contractor, and the cynical and manipulative lawyer, along with a host of hapless British and American expats. It is mostly humorous, bordering on satire, but achingly sad in its depiction of betrayal.

The title refers to Hannibal’s defeat of the Romans at Lake Trasimeno, near Perugia, during his invasion of Italy in the Second Punic War and suggests, tongue in cheek, that the current travails in Umbria are his legacy.

Stone Virgin, first published in 1985, allows Unsworth to give free rein to his artistic interests, but also to his obsession with obsession. The protagonist is restoring a medieval sculpture of the Madonna and finds himself infatuated with its history, and then with the scion of the family linked to it: an alluring woman married, ironically, to a sculptor.

The contemporary narrative — if 1972 can be considered contemporary — alternates with historical episodes tracing the past of the statue. These are richly imaginative, but I found myself impatient to return to the main story. However, the loving, deft descriptions of Venice, where the novel is set, show again the power of Unsworth’s prose as he portrays the enduring charm of this unique city.

Losing Nelson is the story of an unbalanced anti-hero obsessed with Horatio Nelson and determined to rescue his beloved admiral from some of his controversial actions — notably, a wave of executions during the occupation of Naples. It is dark and disturbing.

Two other Unsworth novels attracted me earlier because they deal with some of the same places and events in my own historical thriller, The Grand Mirage. The Rage of the Vulture, a 1995 novel, is set in Constantinople in 1908 (my hero arrives in the Ottoman capital in 1910) and involves a protagonist wrestling with guilt, and his desire for revenge, over an Armenian lover killed in the pogroms during an earlier stay. The writing — and the author’s ability to conjure up the past — redeems a novel that, again, is quite dark.

Land of Marvels, which shifts to 1914 Mesopotamia, is a more enjoyable read, as a British archeologist conducts an excavation in the path of the planned Baghdad Railway while Great Powers jostle for oil riches in what is now Iraq. There are spies and suspense, but the novel also allows Unsworth to indulge his antiquarian passions and gift for description.

Unsworth published 17 novels, mostly reflecting his travels and sojourns abroad. I haven’t read Pascali’s Island, but the 1988 movie starring Ben Kingsley, Charles Dance, and a young Helen Mirren brings it vividly to life. The setting is the Ottoman Empire in 1908, with Kingsley’s Pascali dutifully spying for the sultan on a remote island when a con artist posing as an archeologist dupes him and steals the woman he loves.

The novel was shortlisted for the Booker Prize, as was Morality Play, a mystery involving an acting troupe in the 14th century that was made into a movie in 2003, “The Reckoning,” starring Paul Bettany and Willem Dafoe.

The Booker honors cemented Unsworth’s reputation, though he never reached the bestseller levels of franchise authors in commercial fiction. He was an accomplished prose stylist with literary depth along the lines of the late Ward Just, who reliably produced well-crafted novels that are a pleasure to read.

Life lessons from a monster who won’t die