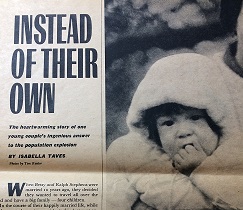 Not everyone likes my novel, Famous Adopted People. And, frankly, I’m thrilled about that.

I wrote the book to challenge the popular narrative on adoption, one that I unwittingly helped to frame when I was a toddler in 1968. In that era, adoption was regarded with some ambivalence by society, stigmatized by the implications of illegitimate births and infertile couples.

That began to change, due in part to the rise of transracial adoptions, in which the adoptee is immediately identifiable as a genetic outsider to her family due to different skin tone, eye shape, facial features, and/or hair texture. With transracial adoptees as the poster children, the adoption story evolved from a dirty and shameful secret into a feel-good fairytale of rescue, second chances, and the infinite capacity of the human heart to love.

I was part of that changing narrative. In January,1969, I was featured in an article published in Philadelphia’s Sunday Bulletin’s This Week Magazine titled “Instead of Their Own.” The lead was, “The heartwarming story of one young couple’s ingenious answer to the population explosion.”

My father is quoted as saying, “Don’t make us look noble. This is a private matter.” But the journalist couldn’t resist. Here was a golden opportunity to tug at the heartstrings of her white, middle-class readers. This was during a time when openly interracial families were still a shocking novelty, and readers were meant to feel that my parents were saving me, “a child who otherwise might not have had a chance.”

Emblematic of the attitudes of the time, the language in the article is rife with classism, racism, and condescension. My parents are depicted as an idealistic couple, “healthy, young and successful,” my father “a captain of industry,” my mother a new breed of housewife who took night courses, volunteered for charities, and was politically active, all while being an attentive wife and mother to three of her own biological children.

And I, “an enchanting almond-eyed baby,” am assigned a happily-ever-after ending at the tender age of 18 months.

I am not the only transracial adoptee of my generation who was featured in the local media. I recently met another Korean-born adoptee who said he was featured on the front page of his local paper, after which strangers would drop by his house eager to get a glimpse of the Oriental baby.

Over time, people became invested in the feel-good adoption story, and today it has become the “traditional” adoption narrative. These stories are problematic to adoptees, however, because they make us the passive objects of our own stories, rather than the subjects.

My own journey to coming to terms with my identity was a long and winding one, replete with wrong turns, regression, directionless wandering, and getting stuck in ruts. I did not recognize myself or my story in the depictions of adoption in movies, novels, articles, and adoptive parents’ memoirs and blogs.

In fact, I became frustrated with the relentless sameness of the stories, the almost pathological refusal to acknowledge that there was another side to the adoption story: the adoptee’s side.

So I decided to write my own adoption story that would turn the popular narrative on its head. In adoption circles, this is called flipping the script, rebutting the conventional tropes to reveal the more complicated aspects of the adoption experience.

But attitudes do not change overnight. It takes much time and many voices to alter the accepted discourse. As anyone who has studied the civil rights movement in America can tell you, the only way to affect change is to raise your voice, stand up for what you believe in, and face head-on the resistance of those who would rather you kept in your place.

So, when I get those one- and two-star reviews on Goodreads, I know that I’m doing something right. I’m making people uncomfortable, challenging their notions of what the adoption narrative is and who has the right to tell it. By and large, the criticism of Famous Adopted People has nothing to do with the quality of the writing or my ability to tell a story. It is discomfort with the challenge to readers’ entrenched biases.

Usually, it is painful for a writer to get negative feedback on her work. But when the criticism reflects more on the reader’s inability to interrogate her own narrow view than on my authorial talent, I hold out hope that my book may have introduced that first crack in the reader’s one-sided view of adoption through which, as Leonard Cohen said, “the light comes in.”

It may take a few years, it may take decades, but with each tweet, article, essay, memoir, poem, documentary, blog, vlog, and novel, adoptees are changing the way the public thinks about adoption.

In the meantime, I’ll know that, with every negative reaction to my book, I may be sowing the seeds of doubt in that reader’s mind about the wisdom of the “conventional” view on adoption.