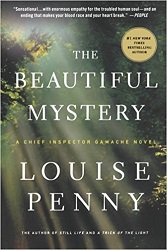 It may seem an odd pairing to look at a murder mystery by Louise Penny and a travel book by Patrick Leigh Fermor to understand the quasi-mystical appeal of a monastery’s serenity. But these two books both succeed in bringing the reader into this obscure world as completely as possible without actually visiting an abbey.

In The Beautiful Mystery, Penny sends her crack Sûreté du Québec detectives, Gamache and Beauvoir, to a remote monastery in the Québec wilderness to investigate a murder in that closed community. The suspects are the 23 monks remaining after the prior is murdered.

But the investigation at the fictional Saint-Gilbert-entre-les-loups, the last outpost of the equally fictional Gilbertines, is anything but a cozy mystery. The suspects range from the abbot to the most recent arrival, who is assigned to keep watch over a door that is never opened to visitors in case he has second thoughts and wants to leave.

The exception regarding visitors is, of course, the arrival of the two Sûreté inspectors. The novel, in fact, is as much about their ambivalence to the experience of life in the monastery as it is about anything else.

The Gilbertine monks live under a vow of silence (suspended for them to talk to the detectives), and their days are filled in typical monastic fashion with manual labor, prayer, study, and, above all, the chanting of the divine office seven times daily.

Gregorian chant is the beautiful mystery referred to in the title. Penny’s novel came out in 2012, about the time the plain-chant was briefly fashionable. The problems at St. Gilbert arose from the fact that the monks had made a wildly successful recording of chant that brought significant revenues to the monastery, making it possible to undertake much-needed repairs.

The prior, who was the choir director, wanted to make another recording and suspend the vow of silence so the monks could go out to publicize the recording. The abbot decided against it because he feared it would mean an end to the peace and serenity of the monastery.

St. Gilbert’s actively recruited young monks for their voices — the abbot went out like a baseball scout to watch for growing talent. But for him, the goal of singing the office, as it was for St. Benedict in the rule establishing monasticism, was to praise God, not reap worldly benefits for the monks.

The debate within the abbey reflects the overall ambivalence not only among the monks but in human nature, one side tugging for peace and reflection, the other for achievement and recognition.

The reactions of the two detectives also mirrored this ambivalence. Gamache, the superior, was enchanted, so to speak, by the Gregorian chant, and felt the draw of meditation and silence. The younger deputy, Beauvoir, chafed at the austerity of monastic life and found the music boring.

Fermor expressed the same ambivalence in his 1957 book, A Time to Keep Silence:

“Only by living for a while in a monastery can one quite grasp the staggering difference from the ordinary life that we lead. The two ways of life do not share a single attribute; and the thoughts, ambitions, sounds, light, time and mood that surround the inhabitants of a cloister are not only unlike anything to which one is accustomed, but in some curious way, the exact reverse.”

And this was before the technology that submits us to a constant barrage of noise. Fermor, who stayed at two monasteries in France while writing a book, at first resisted this culture shock, but soon succumbed to the charm and serenity of the monks. He goes on to note that such a life is only possible if one believes, profoundly, in the efficacy of prayer.

This short book features Fermor’s amazingly lyrical descriptions of architecture and setting that complement the monks’ goal of a harmonious life. (Those not familiar with this writer’s virtuosity should delve into his marvelous trilogy — A Time of Gifts, Between the Woods and the Water, and The Broken Road — chronicling his trip on foot between the wars from England to Constantinople.)

Gamache and Beauvoir found their murderer and the proof that seclusion in a monastery does not spare one from the vicissitudes of human nature. Fermor came to the same conclusion as he ruminated about the hardships of Trappist life — an order much stricter than Penny’s Gilbertines — and whether it was guilt that drove someone to such masochism. The abbot at the Benedictine monastery demurred and said simply, “It’s very special. It appeals to some natures, but they are very rare.”

But in both books, the outsiders found that, for the most part, these monks had chosen a life that made them inexpressibly happy. When Fermor asked one of the Benedictines to sum up his way of life, this monk asked the author if he’d ever been in love.

Authors are the only ones truly flying solo.