The Poet and Her Poems

An appreciation of Grace Cavalieri’s new collection, With. 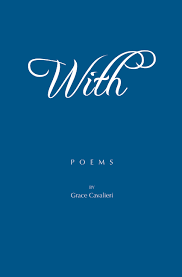 Grace Cavalieri is a dynamo — poet, playwright, reviewer, essayist, anthologist, publisher, interviewer, broadcaster (“The Poet and the Poem,” from the Library of Congress), and more — the “more” includes memoirist with the publication, in 2015, of Life Upon the Wicked Stage.

The dynamo doesn’t slow down. “Work is My Secret Lover” she titles one poem: “Work / takes the palm of my hand to kiss / in the middle of the night / It holds my wrist lightly and feels the pulse.” The poem could serve as an epigraph of Cavalieri’s literary life.

Her new volume of poems, modestly titled With (Somondoco Press) ­­— though the title poem is anything but modest in form — is Cavalieri’s 39th book; her first, a collection of poetry, Why I Cannot Take a Lover, was published by the then-new Washington Writers Publishing House nearly 40 years ago. Over these years, her poems have cast a wide net — lyrics, narratives, dramatic works such as Pinecrest Rest Haven, a novella in verse, and single-character poems like “Anna Nicole.” And this says nothing of her plays.

Those who have been reading Cavalieri’s works like I have will recognize her voice in With, especially in the poems of memory. They “record” episodes from childhood (Trenton, New Jersey), of family (Italian), of raising children, of her long marriage to Navy pilot and sculptor Ken Flynn, and his death several years ago.

These episodes have significance for the poet, and they often hold our attention: Their charm is in the warm narrative tone and their unadorned clarity, what James Wright called “the pure clear word.” However, they are not “breakthrough poems”; unlike a good deal of modern poetry, the reader/listener here is not called upon to participate in creating meaning, to make their way through the ambiguous or elliptical.

Here are lines from a handful of such poems: “Across the street from Gray’s on the corner / was a record store, and once I asked my father for $5.00 / to buy an album of Carmen Cavallaro / playing on the Piano” (“Gray’s Tea Room [1940]”); “My Aunt Mamie bought it from the Italian store, / A block of paper mache-meat, wavy too.” (“Tripe”); “In my grandmother’s restaurant, I am 10, waiting for my mother to finish tables. / A customer smiles at my straight black hair and shiny bangs.” (“Being Japanese”).

But there are numbers of poems in this collection that take us out of our comfort zone, poems in which we cannot sit back but have to actively participate in creating their meaning. They are not anchored to memory or episode but often compel our attention by exploring what they’re about. Or they excite our attention with compelling lines and tropes that the poet doesn’t try to (or perhaps cannot) decipher.

Take the opening of “Invisible Bridge”: “This is someone else’s story I thought. Writing about physical beauty.” The poet is working through an argument in which the poem is exploring itself. “It’s all in this poem / now being written…”

There are many poems in With that are captivating because they require us to stay with the poem itself, not just with the story the poem is reporting. “Locator,” for example: “I don’t know why love works. Yet it’s / undefinable, every line of it hand tooled // like a finely wrought page. / …Why do you torture me for explanations? I only know love is the bed of gold we lie on.”

The stunning work of this book is the title poem, “With,” an 11-page masterpiece that is collage-like and excites by the juxtapositions of its unnumbered sections, 24 of them that range in length from one line — “You were the red dish in London” — to more than 30. Louis Simpson, in his short poem “American Poetry,” wrote, “Whatever it is, it must have / a stomach that can digest / Rubber, coal, uranium, moon, poems. // Like a shark it contains a shoe.”

Though “With” is lacking sharks and uranium, it is a striking American poem — its sections move abruptly from one fragment to another, from the elegiac to the banal to the memory and back as though the poem were a continuous present. Here’s an example from one section: “This grief, / what / do you think of it?” Then the most ordinary if not the seemingly banal:

We have to pack up everything by noon,
the sheets
all the garbage out.

Did you forget the frozen steaks?
And why run the dishwasher with so much more?
Get the stray cats out —
Find the ointment that was downstairs…

The technique of composing a long poem of fragments of memory, of conversation, of rumination, of the daily detritus, of indefinite pronouns, of elegy, is hardly new. As different as T.S. Eliot’s Wasteland is from William Carlos Williams’ Paterson, they use collage.

Grace Cavalieri has done this in her own distinctive way and voice, peopling the sections with recognizable subjects and themes, but not beholden to their more standard forms. “With” is a breakthrough poem, compelling in what the poet has done with form, and at the same time enriching the surrounding poems.

On the Allure of Eros

Plato’s Symposium and the philosophical search for love

A New Way to Love

Searching for myself on the streets of Paris.