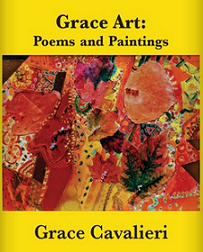 Grace Cavalieri has led, and continues to lead, a remarkable artistic life, not only as a prolific and well-honored poet (she is Maryland’s poet laureate) but as a playwright of some 20 plays and producer/host of “The Poet and the Poem,” an interview series from the Library of Congress which she founded for public radio 44 years ago and which continues to this day.

She’s also a longtime publisher and was a regular reviewer of poetry for the Independent. In her spare time, she’s taught hundreds of writing workshops and counseled innumerable student writers.

And there’s more. In the past 18 months, she has become a visual artist, creating a series of striking abstract paintings that evoke a range of moods, from reflectiveness to mayhem. Even during this time of covid — the mental stresses of which, reports the NIH, will likely persist for years — Grace has been indefatigable.

Grace Art, her newest book, is one register. Subtitled Poems and Paintings, it is unique most obviously because of its paintings, but also because of the poems themselves, which break new semantic ground.

“Turmoil makes art!” she says in a brief interview prefacing the book. “When faced with the ultimate wall (living alone for a year), there was nothing for me to do but paint a window on that wall. And then keep going every day as a discipline.”

Grace Art is made up of 26 paintings — acrylics and mixed-media/collage — and 26 poems, one of each paired in two-page spreads. The paintings have titles not because of any resemblance to a figurative subject but seemingly for their own sake. Here, for example, are the first of two stanzas of “The Last Painting”:

“It needs a title,” I say, “some signal for the readers.”
He whispers, “the picture says I’m going away.”
To cover sudden silence, I say, “I’ll help you pack.”

A number of the paintings’ titles are simply the names of Grace’s daughters and friends; others have abstract titles such as “Diagnosis,” “Escape,” or “Gloria Al Masri.” Did the artist give the painting a name beforehand because it was in her mind or after because it was to be a gift?

And are the pairings related? Perhaps. “The Last Painting,” for example, is paired with an acrylic, “Color of Berries,” which features no berries but intersecting reddish and purplish lines. Suggestive of berries? Maybe, but not if you didn’t have the title.

The poem “Japanese Cats” is paired with “Vickie Rudow.” The painting has no images of cats but rather is a marvelously elaborate acrylic which, for the purposes of this sentence, might be likened to a quilt of irregularly patterned pieces of fabric with small, stylized images, a child-like depiction of the sun, a musical staff, the Star of David, and unidentifiable or abstract markings.

On the other hand, here is “Learning from Buddha,” which is paired with the mixed-media painting “Bela De Ma”:

Throughout the book, the paintings and poems can be enjoyed separately, yet the former complement the latter. Not thematically, as I’ve said, but in their both being free. Free from linear logic. Free from narrational memory. Free from the mimetic.

Fortuitously, while reading Grace Art, I happened on a circa-1920s letter by Hart Crane to Poetry magazine founder Harriet Munro, who rejected a poem of Crane’s because of lines like, “The dice of drowned men’s bones he saw bequeathed / An embassy.”

“Tell me,” Monroe wrote, “how dice can bequeath an embassy.” Crane’s impatient response: “As a poet I may very possibly be more interested in the so-called illogical impingements of the connotations of words on the consciousness (and their combinations and interplays in metaphor on this basis) than I am interested in the preservation of their logically rigid specifications at the cost of limiting my subject matter and perceptions involved in the poem.”

Here are a few excerpts from Grace Art that Munro would probably have rejected:

“She always wanted to make love to a clock so she’d know / when to stop.” (“Awards Day”)

“Once the Anglicized air was sweet and pure / Now a scar on our cheeks of smoke / Touch it we are the lunatics who / Slept with moonlight on our faces.” (“Lunatics”)

“It’s not luck you need to read the stars. It’s the / shape of sorrow in your cup” (“The Lady Reads My Palm”)

“Carve some starved corn / out from the Harvest moon / and throw in some wild flowers — /; Chain the bowl to the arch of wind / then sleep against the wall / until the perfect date to bake — ” (“Making Tortillas Shaped Like Your Heart”).

The poems of Grace Art leap from one line to the next, as though electrons jumping their orbits and, in the process of doing so, releasing photons of energy. The same can be said for the paintings. Both offer surprises, if not astonishments — language and paint on the loose. They are not works about the past but presentments of the present — the now — in the act of their making.

Merrill Leffler is the author of the poetry collection Mark the Music and the publisher of Dryad Press.