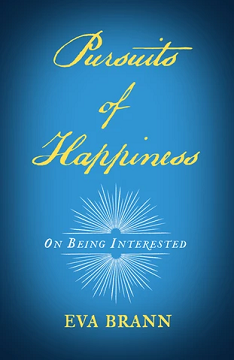 If the title of Eva Brann’s new essay collection, Pursuits of Happiness: On Being Interested, sounds familiar, it may be because you remember the Declaration of Independence, which entitles us to freely pursue joy and live life as long as we don’t violate others.

In 38 essays, Brann adds meaning to this message with a knowledge of classic literature and more than a dash of pepper, irony, and wit. She claims she seeks obscurity, but she’ll have to try harder, for this compendium positions her as arguably the outstanding philosopher in philosophy’s canon for the 20th and 21st centuries.

But Brann doesn’t care about canons; she’s already immersed in writing her next book. And she certainly doesn’t want to be called an academic. In one essay, she describes academics as “insulating students, wrapping them in wool.” Instead, “I think of myself — as do my colleagues — neither as a professor nor a scholar, not even as a teacher, but as one of a company of curators of a community of learning.”

Brann is a former dean and the longest-serving tutor (1957-present) at St. John's College in Annapolis, Maryland. She’s the 2005 recipient of the National Humanities Medal, is internationally known for her theories on education, and furthers the “Great Books” program as a defining figure.

Philosophy concerns “the nature, causes, or principles of reality, knowledge, or values, based on logical reasoning.” Of course, any “study” is changed through the lens of the individual who’s doing the studying, and Brann is the most enjoyable (and opinionated!) philosopher you’ll encounter. Her writing is clear and flows beautifully.

I appreciate that she uses poetry to brighten and punctuate the page. She calls upon the world’s best poets to illustrate a point. In chapter six, “Sacred Scripture,” for example, she writes:

“The capacity called imagination is the power of image-making, of having or producing mental images, of inner perceptions: immaterial scenery, bodiless people, canvasless pictures, soundless songs — which are sometimes even more poignant than embodied tones:

Heard melodies are sweet, but those unheard
Are sweeter .
. .
(Keats, “Ode on a Grecian Urn”)”

It’s not surprising that Pursuits of Happiness begins, in its preface, by parsing language, letting us see, right away, what we’re in for — a person who takes words and stands them on edge to consider meanings from every angle:

“‘The pursuit of happiness,’ mentioned in our Declaration of Independence as an ‘unalienable right,’ doesn’t, it appears, mean ‘the endless chase’ but ‘the actual practice’ of happiness, as in ‘the pursuit of a vocation…’”

In chapter three, Brann writes of education, “What is the central good and what are the alternative ways of achieving it?” We could do far worse than to ponder this, and it certainly could make for better leaders if we did. People who think through problems in a rational way eventually activate thought into action. So, we’d better be on the side of the “central good.”

This is the way philosophy becomes a basis for political thought and the governing principles we live by. But who are these influencers who suggest standards for how we treat each other and how we reset language to clarity? Philosophy is the deduction of thought. In Pursuits of Happiness, we can see how steps are taken not proving an idea, but in working for its proof.

Brann holds us steady in a world that sometimes seems chaotic. And there’s much to enjoy in chapters titled, “The Greatness of Great Books”; “(The Idea of) the Good”; “Difficult Desires”; “Where, When, Is Time” (a favorite of mine); and “Studying the Imagination.” Predominantly, we read about the teacher, the student, the best kind of seminars, and the properties of education, Brann’s lifelong commitment.

These essays were written over the years, presenting a wide array of topics. We hear Brann’s opinions and arguments about why novels are preferable to “dramas.” There are chapters studying Homer, Socrates, and Plato, yet they sit alongside essays about everyday questions. In chapter one, “Thing-Love” is subtitled, “Do Cars Die?” If you’re not taken with one essay, you will be with the next.

In the essay “Is Philosophy a Subject,” the first sentences read:

“Of course, it isn’t. How could it be, considering that, according to its name, it is an affect, a passion, a love and its object. From philos, ‘loving’ or ‘fond of’ and sophia, ‘sagacity’ or ‘wisdom,’ is the arousal of the soul by an inquiry into, the pursuit of, the kind of knowledge that satisfies our humanity. Thus ‘philosopher’ is said not of one who is sage but who would be wise.”

At this time, the loudest voices among us are dystopian, and spoken language is losing all civility. If you want a change from this, Pursuits of Happiness is a good place to start. Here’s a fascinating, independent-minded writer whose words connect us to living more fully toward a more beneficial life — thought-forms as catalysts.

Grace Cavalieri is Maryland’s poet laureate. Her latest book is What the Psychic Said.

Here at the Independent, the year is off to a strong start. In January we posted reviews of 28 books, as well as 15 other literary features including author Q&As, blog posts, and of course the launch of An Independent Voice.

Live and In Person!

Several authors appearing at the Gaithersburg Book Festival have also appeared in the Independent.