A rundown of the writerly (and readerly) gatherings I’ll be attending in 2019. 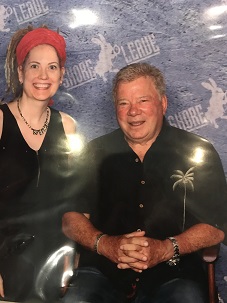 The end of the year always means it’s time to plan for the next year’s conferences I’ll attend. I’ve attended reader-based and craft-based conferences and enjoy both.

As an author, I’m always looking for a good balance in my selections so I can get the most out of my experiences. As a reader, I just want to have some fun, meet authors I love, and catch up with old and new friends.

I’m kicking off 2019 in Daytona Beach, Florida, at the end of February, where I’ll attend Coastal Magic, a “super casual, urban fantasy, paranormal, and romance focused author/reader weekend.” The organizers include a mix of writers who write hetero and/or gay protagonists. I’ve never been, but since my latest series sits firmly within urban-fantasy/fantasy and romance, it’s a natural fit.

In late June, I’ll be going to EuroPrideCon for the first time. The fact it’s being held in Amsterdam this year may play a teeny, tiny part in my desire to go. EuroPrideCon celebrates LGBTQ literature of all kinds, and I’m looking forward to meeting readers and writers from the other side of the pond. I’ll be attending as an author, but hopefully will have some flexibility in my schedule to fangirl over authors who don’t make it to U.S. conferences.

On my list of repeats is GayRomLit Retreat (GRL) in October. This will be my fifth year attending, and it is by far my favorite conference. It brings writers, audiobook narrators, bloggers, and readers of gay romance together for a long weekend of books, parties, and fun. I’ve attended twice as a reader and twice as an author. This year, I’m going to see if I can snag one of the coveted featured-author spots. I love that it moves to a different city every time. This year, GRL will be held in Albuquerque, New Mexico. Since I’ve never been, I’m stoked and plan to spend a couple of extra days getting to explore a bit.

I’ve added my publisher’s craft workshop to my calendar, as well. These conferences are not for readers, but for the authors in a particular publisher’s stables. Not all publishers run workshops, but if they do, I highly recommend them for writers. It’s a long weekend of workshops centered around craft and marketing. It’s also a great way to get to know your publishing-house staff better and an excellent opportunity to pitch new series.

I may add another conference or two into the mix, but chances are, those will be close to home. For readers and writers of traditional mystery, Malice Domestic, held each year in Bethesda, Maryland, is a must. While I don’t write or even read a lot of “cozies,” I love Malice Domestic. Not only does it host an incredibly talented array of authors, but it’s also such a welcoming and enthusiastic community. I haven’t officially attended the last couple of years, but I often manage to stop in to give hugs and have a meal with friends I’ve made throughout the years.

Bouchercon is the World Mystery Convention and also moves sites every year. This year will be Dallas — another place I haven’t visited. Bouchercon is the largest gathering of mystery authors and readers in North America. If you’re a reader, it’s a great place to meet all your favorites, both traditional and suspense writers. If you’re an author, you’ll be surrounded by other industry professionals. It’s a networking mecca.

To sweeten the pot for writers, this year, Sisters in Crime will be hosting a pre-conference workshop on “Writing the Breakout Novel” with literary agent Donald Maass. I would LOVE to attend, but it’s the weekend after GRL, so I’m unlikely to. But never say never…at least not where conferences are concerned.

Another conference I’ve attended more than once is the Writer’s Police Academy. This is a hands-on weekend for writers to “enhance their understanding of all aspects of law enforcement, firefighting, EMS, and forensics.” And it’s just a whole lot of fun! I attended last year for my third time and took courses like confined-space crawl (in the dark!); defense and arrest techniques; firearms simulations; force on force; swat: dynamic door entry; and tactical emergency casualty care, just to name a few. I also managed to win the timed “getting dressed and undressed in tactical gear” challenge during the Fun Fair. Go, me! (Hey, it was a lot of gear.) But seriously, for crime writers, this conference is a must.

Last year, I did a quick weekend trip for Shore Leave, a fan-run science-fiction convention. I don’t write sci-fi and I’m not much of a reader of it, but I am a big “Star Trek” fan. When I heard Shore Leave was always held near Baltimore and William Shatner was the headliner, it was a no-brainer. Can you say, “bucket list”? They haven’t announced their headliner for 2019, but if it’s George Takei, you can bet I’ll be making that trip again!

One conference I haven’t attended, but would very much like to in the future is Creatures, Crimes, & Creativity in Columbia, Maryland. It’s just down the road, but it falls during several family events, so I’ve never been able to go. I’ve heard amazing things about it, though, and I love the idea of a multi-genre conference where romance, mystery, and fantasy/science fiction authors and readers meet up.

I like to cross genre boundaries at every opportunity, so this conference sounds tailor made for me. All meals are included with this one to encourage readers and authors to socialize more. And, as of last year, they’ve started hosting a Noir at the Bar during the conference.

There are easily a dozen other conferences I would like to check out, but a girl’s gotta have time to write…

[Editor’s note: Don’t forget about the Independent’s own Washington Writers Conference, too! The 2019 event happens May 10th-11th in North Bethesda, MD. Rumor has it our keynote speaker is bestselling author Jeffery Deaver…]

Seeking help from these writerly guides is a no-brainer.

When a flighty muse throws out too many ideas, Scrivener and solid work habits come to the rescue.