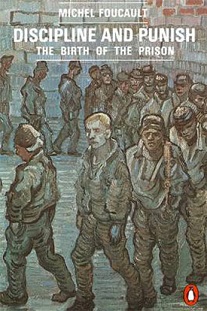 I read Michel Foucault’s essay “Panopticism,” from Discipline and Punish, again the other day. I’ve been trying to find a way to break through to a student (a freshman) about what discipline is. I see many young people struggling against their education because they think their school oppresses them.

I felt that way when I was getting started in college, too. Honestly, my first year was a holding pattern. I was in no way prepared to be part of my own education, so I resented others forcing it on me. I didn’t first read “Panopticism” until I was 35. By then, I’d had enough experience to realize the wonder of Foucault’s microcosmic examination (something he specialized in; see “Las Meninas” in The Order of Things).

Foucault had this skill of examining for microcosms in common with Jeremy Bentham, who, in the 1790s, developed the idea of the Panopticon as an architectural answer to the problem of large numbers of urbanized people living, working, producing together.

Here is what Bentham himself advertised: “'Morals reformed — health preserved — industry invigorated — instruction diffused — public burthens lightened — Economy seated, as it were, upon a rock — the gordian knot of the Poor-Laws not cut, but untied — all by a simple idea in architecture!'”

The idea is that, in the Western world, a small number of people should be able to monitor and control a large number — in the army, in a factory, in a prison, in a school. Although Bentham didn’t live to see his idea embraced, the concept of panopticism (seeing all) pervaded the development of the modern world so thoroughly that we forget to be aware of it and its effect on people — the most profound being that the subject of the observation internalizes the discipline which the authority is attempting to instill.

In Foucault’s examination, it all started in Europe with the plague and society’s response to it: the administrative development of quarantine, which meant instilling discipline in the population. Society had had the need and the means to assert control from the center to the periphery, and its success was proof of its propriety.

Many generations passed before Bentham recognized the need for surveillance on an industrial scale and developed his architectural response. But in microcosm, this is what Foucault identifies as the key. As divestitures of political and economic power from kings developed into so-called democracies, individuals would have to abide by certain rules.

With freedoms like assembly, press, right of redress, the vote, gun ownership, trade, etc., came civic responsibilities like public education and governmental regulation of infrastructure and commerce. “The Enlightenment, which discovered the liberties, also invented the disciplines.”

It is a frightening structure, if you only read this essay by Foucault, because he is unrelenting about analyzing what panopticism is, its cause and effects. But when you read the rest of Discipline and Punish, he reveals, most subtly, that, at the furthest reach of the disciplinary power — in the prison cell, in the barracks, in the hospital, in the classroom — the flow of power moves in all directions. The subject can assert power just as readily as the panoptic authority provided it stays within the boundaries of the discipline.

So, while Foucault would encourage a healthy skepticism of established authority, he never succumbs to conspiracy theorizing. He intended that his cold calculation of the “technologies of power” would be a guide to grassroots social change. This is why Foucault is a hero to the Gay Rights Movement and to all free-thinking individuals.

Foucault said that power may be re-codified in every new interaction between the panoptic authority and its subject. This is specifically how the subject may gum up the wheels in the gears of the authority’s surveillance. Change is possible.

If resistance can organize itself, groups of marginalized people (any identity that can define and sustain itself) can make claims to power in society they haven’t known before. Foucault is among the progenitors of identity politics:

“Discipline…is a type of power…comprising a whole set of instruments, techniques, procedures, levels of application, targets…it is not that the beautiful totality of the individual is amputated, repressed, altered by our social order, it is rather that the individual is carefully fabricated in it, according to a whole technique of forces and bodies.”

I hear a message of hope, especially for college-age students. The individual is cultivated by the institutions of the state (the more democratic, the better) in order to take over the reins of power in the state, just as a child is raised to be independent of its parents. And any group of people who have the discipline and determination to challenge the status quo and establish a new institution may do so.

We live in human society, so there is oppression. But we also live in a society that has established the means to correct institutional injustices through deliberation and reason. By analyzing the Panopticon as a microcosm of the tremendous shift of productive energies in society at the time of the Enlightenment, we can see how power remains at the individual’s grasp.

This is not something to give up. Even though individuals at the furthest reach of power face overwhelming state power by themselves, when they unite, they can fight and win against state power. Martin Luther King knew that; multiple generations of feminists have known that.

Foucault suggests, to those getting started in the world, that they allow themselves to be disciplined so they can change the way things are done.

Y.S. Fing is in full support of identity politics and wishes Foucault had lived longer.