So, Jack and Upton walk into a bar… 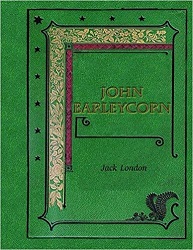 Does your liver hurt? Does it twitch around your insides like a muscle spasm? Have you been a binge drinker for 25 years, like me?

We live in an America of abundance and excess: Marijuana is becoming legal, prescription pills are an industry, and heroin and synthetic opioids kill nearly 50,000 people every year. We have a gun lobby unwilling to account for catastrophic gun-death numbers, including increasing suicide (at around 45,000 every year). Who cares about alcohol anymore?

And yet, 88,000 people in America die of alcohol-related complications annually.

Of course, everybody dies. That’s what the problem drinker says. And one problem drinker, Jack London, wrote a book about it called John Barleycorn. Like the great writer that he was, London summed it all up pretty succinctly in the first microcosmic example of the book.

He had gone to town to vote, sometime in 1911, for universal women’s suffrage in the state of California. After the vote was cast, he got drunk. “John Barleycorn was on a truth-telling rampage, giving away the choicest secrets on himself. And I was his spokesman.”

Returning home to his wife, Charmian, he declaimed like a king:

“I was a lord of thought, the master of my vocabulary and of the totality of my experience, unerringly capable of selecting my data and building my exposition. For so John Barleycorn tricks and lures, setting the maggots of intelligence gnawing, whispering his fatal intuitions of truth, flinging purple passages into the monotony of one's days.”

Charmian, like any heavy drinker’s spouse, must have been long-suffering. She quoted the Bible to suggest that drinking alcohol goes against life. London agreed wholeheartedly:

“John Barleycorn makes toward death. That is why I voted for the amendment to-day. I read back in my life and saw how the accessibility of alcohol had given me the taste for it.”

This is London’s ultimate reason for vote for suffrage, that the availability of alcohol would be limited.

No doubt this vote surprised Charmian. But it was a keen insight, because the 18th (banning production and sale of alcohol) and 19th (allowing women to vote) amendments were passed within a year of each other and are closely connected as the first great social adjustment resulting from universal suffrage.

London, in his inebriated righteousness and self-loathing, imagined, “The best of it is that there will be no hardship worked on the coming generation. Not having access to alcohol, not being predisposed toward alcohol, it will never miss alcohol.”

Chapter one ends with Charmian telling London to write out his rantings and call them “Alcoholic Memoirs.”

London wasn’t ready to call his work Alcoholic Memoirs, so he called it John Barleycorn, naming a friend and demon to so many. And he was dead of alcohol-related complications five years later.

Forty years after London passed away, his old friend Upton Sinclair wrote a book in response to London’s denier’s romanticizing in John Barleycorn called The Cup of Fury.

Forlorn and powerless to the caustic effects of heavy drinking, Sinclair said that some 40 of his acquaintances in his life had been alcoholics whose lives were destroyed. He listed many of the famous writers of the early 20th century. But he paid special attention to London:

“He was one of my cherished friends, a fellow worker in the cause of social justice; and although only a year and a half older than myself, a hero to me personally. I have never ceased to regret that I did not know how to help him. And recently I have come to believe that perhaps I can at least assist others by writing a parallel study [to London’s John Barleycorn] of the effects of alcohol on the many drinking writers I have known.”

This isn’t pretty reading, and, you can bet, it’s not funny, either. Sinclair said he’d had but four drinks in his life because he’d seen the deleterious consequences of alcohol abuse in his family and friends for as long as he’d been living. And he didn’t expect a welcome reception:

“For recording the sorrows and agonies of my fellow writers I expect no applause, and am prepared to dodge the stale tomatoes. Let me say now, therefore, that it has never cost me the slightest effort to decline a drink…Just as emphatically let me state that I do not point a finger to degrade memories and defame men; these were people who suffered from a dreadful disease. Their stories, I believe, may have the impact of an antitoxin.”

Sinclair took his wife’s heart disease as his microcosmic example. He was grateful to his wife, who worked herself into ill-health for him, and when she had a heart attack, Sinclair prayed to God that she might live.

When she ultimately survived, he felt that his prayers had found their affirmative answer. “There, in this book of sorrow, lies the hope. I am able to say to alcoholics: Prayer will help you, your own prayer and others.”

In the next sentence, Sinclair mentions Alcoholics Anonymous and offers the same hope which A.A. offers.

If only we could have London and Sinclair in a room today to ask how Jack felt about Upton’s response! Between them, that is the debate in its essence: “alcohol is a complex friend without whom we can’t live” versus “alcohol is the devil incarnate and must be foresworn.”

Which side do you come down on? Let’s talk it over at the bar…

How a pseudonym can reveal, not mask, the man behind it.