The Making of an Audiobook

Steps to take before getting it on tape 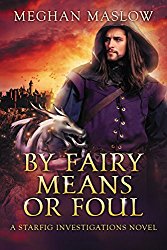 I usually listen to audiobooks when I’m in the car. Between ferrying my kids around to all their activities, and my own list of never-ending errands, I spend a lot of time in the car. Audiobooks have been a great way to pass the time — especially during rush hour when traffic is practically at a standstill.

I have a lot of friends who also listen to them at home while they’re cooking or cleaning or just relaxing. I don’t do a lot of that since I still prefer to read my books instead of listening to them. But I am gaining a steady appreciation for audiobooks and the different narrators who do them.

Before my latest release came out, I knew I wanted an audiobook to accompany it. By Fairy Means or Foul is an odd mixture of epic fantasy with an urban fantasy feel, and then throw in some romance, a private investigator, and lots of humor. If any book was screaming to be read aloud, it was this one! Before this novel, I hadn’t seriously considered an audiobook. They’re expensive, and I was afraid I wouldn’t earn my money back.

Yet I decided to give it a try.

In my area of romance, hiring one of the established names in audiobook narration is a hefty proposition — usually between $2,500 and $3,500. There’s also the possibility of a royalty-share arrangement where the narrator makes half the royalties from the sales.

Many established narrators are not keen to do this unless a well-established author wants to make such an arrangement. If I were an audiobook narrator, I would kill to profit-share with Stephen King, for example. But a relative unknown would be a big gamble. What if only a couple of copies of the audiobook sold? That’s a lot of time and effort invested for little to no return.

I was fortunate to have Greg Tremblay agree to be my narrator. He’s not only an award-winning audiobook narrator, but he’s also a great guy and very easy to work with. If an author doesn’t feel the need to hire an established name (who comes with an established fan base) or simply can’t afford them, then they still can create an account on Audiobook Creation Exchange (ACX) and simply audition narrators for the job.

ACX allows authors to put up a small passage of their text and wait for interested narrators to submit their voice samples reading that passage. ACX allows both royalty-share and payment-upfront systems.

Once that’s been accomplished and a narrator selected, ACX helps with the contracting of their services. Some lesser-known narrators are willing to take a smaller amount in order to build up their portfolios, but many still charge between $300-$400 per finished hour.

Once all of that has been accomplished and the narrator settles into work, they will record the first 15 minutes of the novel and then send the sample over to the author’s ACX account. The author listens to it and either requests changes or accepts the sample, which then allows the narrator to record the rest of the book.

Authors seem to have many different feelings about their role in this process. Some want to hear every voice the narrator does and approve each one, while others are very hands-off. I was pretty hands-off, although Greg checked in periodically. I looked at it the way I would a movie: Once it’s in someone else’s hands, it becomes something different than what it started out as.

Trying to get my narrator to make each voice like the one I heard in my head would drive us both around the bend. Besides, Greg is an artist in his own right — his art is his voice. And he’s really, really good at it. I was looking forward to seeing how he heard those voices in his head and then translated them to the page. I wasn’t disappointed.

My audiobook runs a little more than eight hours and just finished the quality-assurance process by ACX and Audible. Once they’d approve it (it takes between 10-14 days), it was automatically uploaded to Amazon, Audible, and iTunes.

It went live three days ago. I couldn’t be more excited.

Discovering a worldview one “but” at a time