The Highway to the End of the Night

Do drugs open the door? 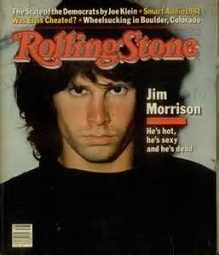 In September 1981, I was 16, living in Indianapolis with my family. I had an older brother who subscribed to Rolling Stone magazine. I’d tried marijuana, and I’d begun drinking beer. But I had never considered “breaking on through to the other side.” Then the issue with the Jim Morrison cover arrived at our house, with the quotation, “He’s hot, he’s sexy, and he’s dead.”

I’ve since come to realize that Jim was a remarkably immature young man, but at the time, I admired his artistic trajectory, based on my curiosity about drugs. First, I read the book that article was based on, No One Here Gets Out Alive. In it, Jim was described as a seeker after “the end of the night,” like Baudelaire or Rimbaud. He wanted to be a poet, and he was a singer in a great rock band. These were the things that I wanted for myself.

Then I found that the name of his band, the Doors, came from the title of a book by Aldous Huxley, The Doors of Perception. Huxley had taken mescaline with the express purpose of writing about his experiences. This drew me to find the book. I wanted to know what these drugs did, how they worked, how they felt.

Sadly, Huxley was far too scientific for my developing romantic brain, and reading about somebody else’s sensations then, to me, was like dancing about architecture. I couldn’t understand it.

Although I didn’t enjoy the book much, I continued to be attracted and repulsed by the stories of drug use, how quickly the experimental became the excessive, and how excessive became madness or death. Even then, I simply wanted to know what the effects were. I wondered what might be locked up inside my mind.

Then I realized that Huxley had taken his book title from a line by William Blake, “If the doors of perception were cleansed, everything would appear to man as it is, infinite.” This revealed to me that exploration of the mind was an issue for the classics, not just some modern decadent hippie thing. Great artists since time immemorial have delved into their minds in the same way that the great adventurers (de Gama, Cartier, and Magellan) have surveyed the world.

They had theories of mind they wished to test, and they put themselves in difficult positions to know what was true and what wasn’t. And they left records of their interior travels so that others could be more confident and perhaps go further later. Given my complacent life as a suburban kid in the Midwest, I felt that I could escape and explore, I could trust myself to make an inward journey of discovery and leave a record.

What was this impulse? Where and when did this idea of the artistic quest first enter my mind? I’ve never been able to define it. Perhaps in reading. But so much is bound up in the choice to leave the known, to confidently seek the unknown. Of course, there are people who are simply trying to escape and don’t care about the unknown, and don’t really mind dying. But that was never me.

During the last of my college years, I chose to “deliver me from reasons why” and tried a variety of drugs, basically as they became available to me. Marijuana became a habit. I smoked cocaine (didn’t feel much, didn’t want more). I drank as much as I could without vomiting. I tried a few different hallucinogens — one fabulous experience with two hits of orange micro-dots — but I preferred mushrooms, and it didn’t take long to realize too much would fry my eggy brain.

Was it bad? Was it good? How has it influenced me? I can only say that, beyond the sensory intensifications, the goofy games played, the junk food ingested, the videogames, the music listened to, the movies watched, the running in the woods at midnight, howling, I felt confirmed that the journey was worth taking and observing.

Exploring my mind caused me to have much less fear about residing and working overseas, in places as disparate as Bangkok, Istanbul, and Nagasaki. Because I was confident about what was inside me, because I was cognizant of strong desires and free to pursue them, I allowed for the pain and suffering of transitions and travails.

And I’ve continued to maintain my records. The full scope of my writings would probably give any future explorer at least some pause. You most certainly will suffer if you choose to find a new life for yourself, a life different from familial and social expectations, different definitions of “reward” and “success.” Expanding my boundaries, documenting the expansion, and my responses to it, has been the ultimate purpose of my life. It seems to me the same path lies before everyone.

Can you picture what will be?

So limitless and free

Desperately in need of some stranger's hand

In a desperate land

My father didn’t care much for Jim Morrison, nor for the “highway to the end of the night.” And as I’ve grown, I’ve come to see that going beyond limits, as Jim regularly did, doesn’t have much to offer me. But as an introduction to the literary life, I still appreciate what Jim and Aldous and William were about — noble aspirations.