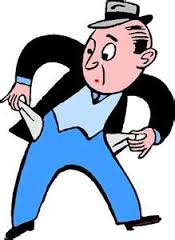 That was the proud boast from Paul Dickson 10 years ago as he joined me for a get-acquainted breakfast. I was about to give up my law firm partnership to write a book. Nervous about what might lie ahead, I turned to Paul, a neighbor who is a ridiculously prolific writer.

(For those who doubt that last assertion, please consult Paul’s list of more than 65 published books. Some years, he brings out four. Like I said: ridiculous.)

From Paul and other writers, I quickly confirmed that the book-writing life is rich in psychic rewards, a bit patchy when it comes to the financial kind. Income is unpredictable. Some years may produce good speaking gigs, a few magazine pieces, a nice advance on the next book. Other years, not so much.

One poignant tale came from an author who explained that one of his books crashed the bestseller lists. More than 200,000 flew off the shelves. “I thought I had finally arrived,” he said, his eyes sad beyond description. “That was what the rest of my life would be like.”

Alas, no. The next book sold his customary, respectable 20,000 copies. Probably didn’t cover the advance.

This is not a plea for sympathy. No one asked us to write books. The world’s libraries (or maybe its server farms?) cower before the ceaseless tsunami of new books. In a single year, roughly 300,000 books are published in the United States alone. To provide context, if you read a book a week for 60 years, you will read just over 3,000 books.

Anyway, book writers have always lived hand to mouth. Charles Dickens was paid for each serialized installment of his novels (not, contrary to popular belief, by the word), which still explains all the palaver in his novels. Fellow British novelist Anthony Trollope held onto his day job with the Post Office until he had more than 20 books in print, including his entire Barsetshire series. Short-story master Franz Kafka worked in the insurance industry, which helps explain the whole cockroach deal.

So imagine my surprise to discover that all this time we’ve been part of the trendy, ultra-hip “gig economy.” Wired magazine defines the gig economy as “nontraditional jobs taken by independent contractors, temps or freelancers.”

New-tech examples include driving for Uber, scurrying around for TaskRabbit, and renting out your digs through Airbnb. Nobody points out that writers have lived this way for centuries. Nothing interests the media unless they can call it high-tech.

For those inside the gig economy, its salient characteristics are (1) the aforesaid unpredictable income, and (2) the complete absence of pesky benefits like pensions, 401(k) payments, disability insurance, or health coverage.

Some public officials are starting to wonder what this potential transformation of the workplace might mean: Will the social safety net grow ever more strained? Might it even disappear? Will more and more people end up impoverished?

(Actually, it’s only a few Democrats who are asking these questions, and even they’re nervous about saying something to offend tech executives, whose campaign contributions they desperately covet.)

For once, writers can provide the answers to a pressing national-policy problem. We know the gig economy and can share the four time-honored strategies for navigating it:

And if you’re wondering about that Paul Dickson fellow? He’s finishing up a biography of legendary baseball manager Leo Durocher, looking at doing his next on Buffalo Bill Cody, and closing in on 50 years without a regular paycheck.

So quit your bitching.