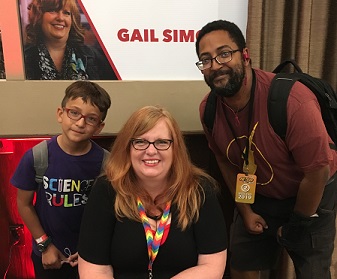 The poetry community, and by extension the larger literary community, is a fandom. We have our annual conventions (AWP being the largest), which share many similarities with Comic-Con. And Instagram has exposed the various cosplays people perform at panels, happy hours, dance parties, and offsite readings.

Our books themselves wear their covers like a costume, suggesting and projecting a sense of character, place, and sometimes franchise. We argue about our favorite writers. We make recommendations. We lament the passing of icons in the field.

Years ago, I was able to see Derek Walcott read at the 92nd Street Y in New York City. There was a who’s who of writers in the audience — including Yusef Komunyakaa, Rowan Ricardo Phillips, Valzhyna Mort, and Teju Cole, to name a few — and at the conclusion of the reading, most were waiting in line to have the former Nobel Laureate sign a book and maybe to get a few seconds to say thanks to a poet whose remaining days on earth were short.

Walcott is, of course, a problematic figure. At the time, I didn’t know about the well-documented accusations of sexual harassment and favoritism from his long teaching career at various academic institutions. But what I was aware of in the moment was how nearly giddy these famous and semi-famous writers were to be in his presence. They were fans, after all.

I was there as a fan, too, and remembered keenly how I’d missed an opportunity to see Seamus Heaney at his last AWP. I didn’t want to repeat that mistake.

I’m not sure if I was expecting something magical or insightful to happen. The reading was lovely. I got a book signed and tried to say a word or two to Walcott — to which he didn’t respond. Then I was in the lobby, geeking with the other poets, making plans, and repeating lines, our voices in cosplay.

With all fandom comes the potential for toxic behavior. Poet Twitter is like a living, fractured record of various arguments about metaphor, or what makes a poem a poem, or how an institution isn’t living up to its promise, or how a publication folded because of a cult of personality.

Some of these arguments are purely petty. Some are vital and gut-wrenching: abusers publicly and rightfully exposed; the dirty laundry of nepotism brought to light; the ever-clanging bell of hypocrisy. It is frankly exhausting. But all fandoms are. Part of their charm is in their equal potential for insightful depth and broad shallowness.

At times, the poetry community is a mile wide and an inch deep, to borrow a common idiom, but the fissures often reveal the unknown chasms of folks at the fringes who’ve quietly been doing the work of crafting syntax into the semi-song of verse.

Several years ago, I took my son to Comic-Con in Northern Virginia, and we got to meet the writer Gail Simone. I am a longtime fan of her writing from Batgirl and Agent X, among other series. She was wonderful, witty, and, above all, kind. She made time for us. She reminded me that when she began in comics, she was still working as a hairdresser and writing a humor blog for fun.

“I was the wrong everything when I first got my shot,” she said to me and my son.

Simone is well known on Twitter for her funny, mockingly provocative tweets. This, too, is a kind of cosplay, one where we can see both the character and the real person simultaneously. And in many ways, that encounter was more indelible to my thinking than was the quietly irascible Walcott at the end of his life.