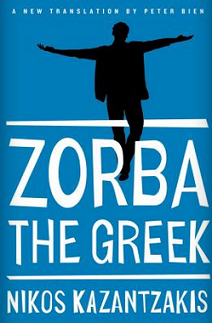 As a book reviewer and book-club facilitator, I’ve been delighted and inspired by many books I’d never have picked up on my own. But I’ve also struggled through others. We’ve all heard Aristotle’s adage about the educated mind able to entertain ideas without accepting them. But is there any value in reading a book — even a classic — that rubs you the wrong way?

I think the answer is yes. Take, for example, my experience with Zorba the Greek, which was our club’s latest classic-book selection. Author Nikos Kazantzakis is a giant of 20th-century Greek literature and was nominated for the Nobel Prize nine times. His character Zorba is a legendary womanizer, drinker, and dancer popularized in the 1964 film starring Anthony Quinn.

“Zorba taught me to love life and have no fear of death,” Kazantzakis wrote. “If it had been a question in my lifetime of choosing a spiritual guide, a guru as the Hindus say, a father as say the monks at Mount Athos, surely I would have chosen Zorba.”

But how, I wondered, could Zorba be a spiritual guide when he only believes in himself? Though “not because Zorba is better than others,” Zorba himself assures us, “not at all — no, not at all! He too, is a brute.”

The novel’s narrator (Peter Bien’s translation calls him “the Boss”) likens Zorba to the first man who escaped the monkey:

“As I watched Zorba dance, I sensed for the first time the demonic rebelliousness of human beings…Zorba’s endurance filled me with admiration, as did his agility and pride. His boisterous steps, together with their elaborate design, were engraving humanity’s satanic history in the sand.”

Although the Boss is educated and bookish, he lacks one essential quality: madness. “Life is trouble; death isn’t,” Zorba tells him. “Do you know the definition of being alive? To undo your belt and look for trouble.”

Which brings me to the women in this novel. There’s plenty of misogyny in Zorba the Greek, and it’s hard to get your head around it. All women apparently have a wound that men are duty-bound to fill. If a woman calls you to her bed, and you don’t go, your soul is destroyed. Luckily, a woman’s greatest joy is to sexually satisfy a man.

Madame Hortense, the novel’s most important female character, is an elderly courtesan who runs a hotel. Zorba calls her a tramp. Her efforts to win his love are pathetic. But Zorba frequently has sex with her, and Kazantzakis seizes every opportunity to mention her withered, drooping breasts, the old court shoes she wears, her face caulked with powder, and the hideous ribbons round her neck. When she dies, villagers ransack her home and then take her table to the courtyard and feast on her chickens.

The widow is another important character in the novel, but unlike Madame Hortense, all men desire her. She pays for this with her life.

“Damned fireball,” cries one man. “Damn you to hell! You start a flame in our trouser legs and never put it out.” After the widow spends a night with the Boss, she’s stoned by the locals and slaughtered in the public square. It’s a deeply shocking scene, especially when village life moves on from it with alacrity.

I probably wouldn’t have bothered to get past all this if it weren’t up to me to run our book discussion. But when I did, I discovered some thought-provoking analogies. Kazantzakis is fascinated by the relationship between lust and repulsion and explores in depth the questionable role religion plays in life. He maintains that if Zorba is the first man, then Buddha is the final man, “from whom humanity has been emptied: no sperm any longer, no excrement no blood.”

The Boss is writing about Buddha. But as he gets closer to Zorba, this goes from a literary exercise to a philosophical struggle his life depends on. Should he laugh or cry when he thinks of this brute, “who, passing through earth’s crust, logic, morality, honesty — reaches its essence.”

A paradox emerges. For all his sophistication, the Boss is detached from earth’s essence. What some call God, others call Satan. Everyone is doomed whether they taste the apple in the Garden of Eden or not.

There were several times I felt like hurling my copy of Zorba across the room. But I was deeply moved by many passages. Kazantzakis writes about Crete in the glaring sun, the presence of ghosts at noon, the constant struggle to evolve, and the sadness of that struggle, which “must surely be felt by swaddled caterpillars aware that their paired wings were opening at their sides like two wounds.”

In one memorable scene, the Boss listens to a monk ringing a gong and thinks “how a sublime ritual of life may decline, preserving all of its imposing external forms and full of nobility but now empty. The soul departs yet leaves untouched the shell that it has constructed to be complicated and ample like the turtle’s carapace, in order that it might fit within. The splendid cathedrals that one encounters in noisy now faithless cities are, I thought, such emptied shells — prehistoric monsters that remain only as skeletons eaten away by sun and rain.”

Being unsettled by a book and reading against your inclinations can shift your perspective. And that is often the beginning of growth. So, for all its brutality, blinding sunlight, and moral darkness, Zorba the Greek is unforgettable.

The theme of man’s struggle against his nature even as he struggles to fulfill that nature is developed further in Kazantzakis’ The Last Temptation of Christ. I’ve just started reading that one, too, and yes, it is also unsettling.

“Who can tell [God and the devil] apart?” Kazantzakis writes in the provocative novel. “They exchange faces. God sometimes becomes all darkness, the devil all light and the mind of man is left in the middle.”