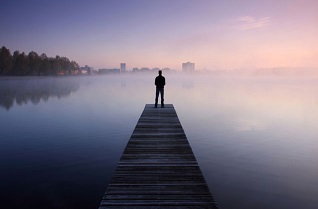 We used to have a piano when I was a kid. Some of my earliest memories are of my mother playing songs while we six children were settling in for bed. My favorite song was “Greensleeves,” which has a fascinating history, and which bewitched me. It evokes in me now the same response as the madeleine did in Proust. I go way back to the beginning of my consciousness. I remember the profound feelings the melody provoked as my body and mind relaxed, alone in my bed, at the end of the day.

I believe my mother wanted me to feel the yearning and loneliness in that melody, because she considered it a fine feeling to have, ennobling. I remember, before I could read, sitting still for a long time, staring at a book with a picture of a sad cloud passing overhead. Sadness and loneliness, melancholy, are not states to avoid, but to cultivate. So, when my mother played “Greensleeves,” I drifted off to sleep with comfort in sadness.

I think my mother wanted me to know that I would always be alone, forever in thrall to myself as a solo individual. She was teaching me about the existential bind: ultimate loneliness until inevitable death. She didn’t say it in so many words. Instead, she created the conditions whereby I would find in loneliness not misery, but strength in recognizing how motivating being alone can be. She taught me how to deal with sadness.

Of course, many people are devastated by depression. I don’t put myself in that category, but many who have been depressed have used whatever artifice they’ve had at hand to find relief from their suffering. Many have been great artists. My project, since I’ve come to govern myself, has been to tap that vein of profundity, and not lose control of myself, my mind, my writing, my life.

It’s an ongoing project. I’ve needed to bolster my own experiences and feelings with other writers’, thinkers’, and artists’ expressions. But I’ve come to the point when I feel I can share this perpetual battle with others. It’s the source of my need to write. Even though I’m socially capable, even though I’ve been surrounded by love all of my life, I’m still alone.

Nobody can stop my mind from going where it will except me. And if my mind goes somewhere I don’t want it to, I can use that in my writing. I can find an outlet for the negative impulses that I have, the circular unreason which claims me from time to time. And if I’m able to form those various expressions into a whole that communicates with other people, then my connections to them are reinforced in the face of whatever futility life and time present.

By acknowledging the deep dissatisfactions I naturally feel, which give me cause for desperation, I’m attending to Kant’s moral imperative, to Nietzsche’s will to power, to Siddhartha’s path toward enlightenment. I’m not giving in to despair; I’m saying, “This is the record of my despair.” And that’s no less than what the original composers of “Greensleeves” were doing. Four-hundred years later, I still feel it in that haunted melody.

Pain and suffering are easily transmittable through music, the truest language humans have. But all aspects of language (poetry, lyrics, prose, and dada nonsense) have their place as a release valve for the ever-accumulating pressures upon consciousness in response to the ultimate reality of emptiness in the universe.

As David Bowie says at 1:40 in “Rock and Roll Suicide,” “You’re not alone!” The music is there because everyone understands it without having to be told. The language is there to rid you of your loneliness, to sing along with others. It may be a delusion, a temporary giving-in to the illusions of consciousness, but it’s a practical, productive one. It reduces misery by measurable lengths, at least for me, and is a source of tragedy and comedy.

Even if I know that no one will ever read what I write, even if what I write is swallowed up in apocalyptic flood, fire, or fanaticism, I will sing my “Greensleeves.” I want other people to know: Sadness about being alone is the beginning point of self-control.

Our Future Remembrance of Things Past