A dogged heroine struggles to untangle herself from the mysterious Vine. 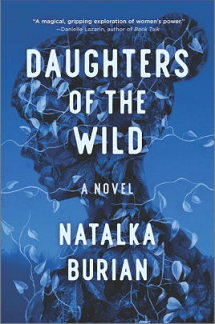 In her debut novel, Daughters of the Wild, Natalka Burian crafts a tale of magical realism mixed with a woman’s determination to control her own life. Inspired by a very old, mysterious text filled with an unidentified language and illustrations of plants not found on earth — the Voynich Manuscript — the author built her story around an invented, otherworldly plant, the Vine of Heaven.

Joanie, a young mother, and her five foster siblings — Emil, 5; Miracle, 8; Sabina, 13; Marcela, 16; and Cello, 17 — live in a West Virginia trailer close to the Garden. That they were all adopted legally is the only thing in their lives that’s lawful. Although adults Sil and Letta are guardians, the children care for themselves, along with caring for the Vine. Their sole mission is to tend its soil and harvest its heaven-sent bounty.

Although males Sil, Cello, and Emil all work at the Garden, it is a connection to women that the Vine requires, as it has for the last 100 years. Upon puberty, the girls begin to perform the Work — a monthly ritual of fertilizing the Vine’s soil with their menstrual blood and other bodily fluids.

Sil and Letta don’t discuss what the owner of the Garden compound — Mother Joseph — does with the reaped Vine, only that its healthy harvest is of the utmost importance, even above the health of those who care for it. But the older children suspect that the Josephs use the Vine to satisfy their greed. According to Cello:

“They’d never made the connection from the work they did in the garden to the empty-eyed tenants who waited by the Joseph compound gate. Could there really be such dark, addictive power in it, such shadowy value?”

Burian explains that the Vine is symbolic, representing “the unknown and the things we as human beings cannot inherently control. I think the Vine is also a symbol of power and potential, and one that the protagonist, Joanie, uses as almost a template as she develops her own power.”

After experiencing the brutality of Mother Joseph’s clan and the death of her abusive man-boy husband, and after coming to a realization about what the Vine is used for, Joanie now lives back in the trailer with the other children. But she knows the Garden is no place to raise her son and, with Cello’s help, plans to escape.

Before she can, however, someone steals her baby. Soon, Joanie and Cello embark on a dangerous journey to find him and right the wrongs caused by Mother Joseph and her depraved family.

Burian’s story depicts how a woman’s desperation from being metaphorically strangled by society can infuse her with a need for freedom and the courage to escape. In developing Joanie’s character, the author says she was “thinking a lot about motherhood — how it can change a person on almost a cellular level. For me, growing a human being inside your body and then giving birth is a kind of spiritual experience that defies explanation. I thought it compelling and full of thematic potential to start the story with Joanie beginning her journey as a mother.”

Burian, who also spearheads the Freya Project, “a nonprofit reading series that supports community-based activism and…the work of women and non-binary writers,” explains why Daughters of the Wild explores the idea that everyone and everything on earth is connected:

“I have always been an extremely morbid person. I grew up on a farm, so I saw death everywhere — death of crops, animals, even decaying man-made structures. I also lost several close family members by the time I reached my teens. I had so much anxiety and fear surrounding my own mortality and the mortality of the people I loved; it was debilitating for quite a while. I found the only thing that comforted me was the realization that we are all connected.

“We all walk on the same earth, we exhale into the same atmosphere, each of our actions affects someone else. We are each a part of all things, and this is another inevitability that many people try to suppress because it is uncomfortable and scary and uncontrollable. But I believe it's true, and the farther we go in time — just looking at the pandemic, the fight for social justice, and the climate crisis — the more obvious and urgent our connection becomes.”

In her unsettling story of social inequality, Burian paints a portrait of disparity between classes, imbalances caused by deprivation, the brutal fist of oppression, and what it takes to escape it all. Its eloquent prose compels readers to consider what makes a person free and how far they’re willing to go to get there.

K.L. Romo writes about life on the fringe: Teetering dangerously on the edge is more interesting than standing safely in the middle. She is passionate about women’s issues, loves noisy clocks and fuzzy blankets, and HATES the word normal. Find her on Twitter at @klromo.