Our author gets a bit lost in her memories of vacations gone by... 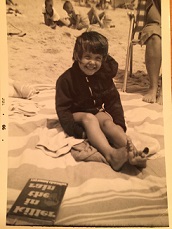 Summer. That impossibly infinite span of days between the end of one school year and the start of the next. Anything, everything was possible, even probable. Excruciating, those last few days of the year, sitting at your desk with papers and books while the whole vast expanse of summer was whispering, bellowing, demanding your full attention.

And, finally, mercifully, the last bell, sounding almost simultaneously with the explosion, the tidal wave, of kidhood, pounding through the doors, splashing out of the building, washing into the bottomless ocean of summer.

The ocean — no, wait, that doesn’t properly come until July or August. Before that, it’s swimming pools and suntan lotion, chlorine, diving boards; blistering concrete and No Running; the tyranny of adult swim. It’s hide-and-seek at twilight, the twink of lightning bugs in trees, in jars, in fists; the night sky, as infinite as summer and as unfathomable. The cry of “Bedtime!” silent, absent, at least for now.

Summer vacation ruins you for life. Once you’ve tasted the freedom, the un-directedness, the irresponsibility of three months exempt from reality, it becomes your birthright. You expect it; you demand it. Those three months are yours.

How can any employer presume to demand that you participate, produce, during the summer? Two weeks? What is two weeks in the face of our lost three months? A piffle. A trifle. A pale and insignificant substitute. Face it: You’ve been wrecked. But no one said that life is fair. Fairness evaporated with summer vacation.

(Am I allowed to plagiarize myself? The above is from an article I wrote in 1991 for the corporate newsletter I edited. It still captures my feelings about summer.)

I came of age long before every child’s time was scheduled and managed down to the minute, overseen by responsible adults. In summer, we were free, within reason, to range over distances and discover our own adventures, as long as we were back in the neighborhood by dusk. We typically ran in a pack of five — the youngest Kane boy, the two eldest McNamara brothers, my brother, and me — and, if our various parents gave it any thought at all, I presume they considered there to be safety in numbers.

I remember my mother scolding us once because one of the neighbors complained that we screamed like banshees every day while playing on the swings in the McNamaras’ back yard.

The swings had been moved there from our back yard because we were getting an addition that included a screened porch where we spent many ensuing summers playing an odd, made-up game we called “Stuff,” writing stories, and drawing comics — we each had an alter-ego character — and, one summer, publishing several issues of a hyper-local newspaper.

The only times I remember getting into real trouble were when we spent three days in a row at the forbidden creek that ran the full length of Bulls Run Parkway, catching crawdads and getting filthy — I was paddled each day with either the flat metal spatula (“the pancake turner”) or the wooden yardstick, after which I guess I finally decided it wasn’t worth it — and again when we got into the building materials for the addition and shredded some of the fiberglass insulation. It was the only time we were ever “grounded” (such an unfamiliar concept for me that I began to brag about it), but I think the painful itching from the fiberglass embedded in our skin was punishment enough.

But most of my summer memories are of discovery, adventure, and freedom — and the library, which was filled with all three. Certainly, we went to the library during the school year, but my memories of the place are steeped in summer.

What adult who loves to read does not harbor memories of discovering the magic inherent in libraries? That you were allowed — encouraged! — to choose stacks of books and take them all home with you for two weeks, then come back for more! Summer + libraries was how I learned to love reading.

And I never got more reading done than when we went to the beach.

Our family went on vacation for one week each summer to the same barebones apartment owned and operated by Boots and Bill Burbage, a place called Homeport, located at Second and Baltimore in the heart of Ocean City, Maryland, directly across from the immortal Plimhimmon Hotel, built in 1894.

My mother kept penciled lists in little pocket notebooks of what to pack for each of us and consulted them every year, editing as necessary. She packed for six and had to bring towels, linens, and kitchen gear, too, because there wasn’t much included with the apartment. Getting it all to fit into the trunk of the car the Friday night before we left appeared to require both physics and calculus.

(I remember being amazed that some people used suitcases when they went on vacation. We packed and unpacked the car using large green trash bags.)

Fifty years ago this summer, our beach week coincided with the moon landing. How my mother was capable of finding room in that trunk for our portable black-and-white TV set is lost to history, but we did not miss the big moment.

The three-hour ride was the longest car trip that our family ever took, with my brother in the front between my parents, and me between my sister and eldest brother in the back, inevitably in the hump seat of whichever Pontiac or Chevrolet we owned at the time.

Once the car started moving, piloted by my implacable father, it did not stop until we arrived at our destination. Woe betide the child who did not take that final opportunity to squeeze out the last drop before climbing into the vehicle.

(I will forever remember the first road trip I took in college with friends. I was the driver, and at some point along the four-plus-hour drive, one of them said, “Are we never going to stop?” The shock of realizing that such an option existed was a seismic moment for me in recognizing a veritable universe of available options.)

Oh, the beach — the unfiltered glare of the sun, the shade of the umbrella, the scratch of sand between suit and skin, the scent of Coppertone and creosote (are there two more evocative aromas?), the shock and pull of the ocean. Putt-Putt golf? No. Arcades? Waste of money. Boardwalk, caramel corn, and the Tilt-a-Whirl? Not until after dinner, after sunset. No, my idea of heaven was a day spent under the umbrella and, in between taking naps and jumping waves, reading.

I don’t know which years I read many of the books that made a lifelong impression on me, but I am certain I read them when school was out: How Green Was My Valley (Richard Llewellyn), The Once and Future King (T.H. White), lots of P.G. Wodehouse, The Wonderful Wizard of Oz (L. Frank Baum), Rebecca and My Cousin Rachel (Daphne du Maurier), Jane Eyre (Charlotte Brontë). I never read any C.S. Lewis, but I had a fondness for priests’ stories like The Keys of the Kingdom (A.J. Cronin) and The Left Hand of God (William E. Barrett).

Wuthering Heights (Emily Brontë) struck me as leaden, and I never understood the big deal about Jane Austen. (It was not until Ang Lee and Emma Thompson’s screen version of Sense and Sensibility that I grasped it, but I still prefer film adaptations to the novels.)

It took a lot for me to abandon a book once I started reading; I was willing to stick with the author and hope that my commitment would pay off. After two from Thomas Hardy, I never wanted to read him again, but high school English had other plans.

Even today — though I’ve installed a window seat, which is my favorite spot inside the house for a cozy winter read — I find there is something magical in that first warm day that allows me to sit outside and read.

It reminds me that summer is coming.

Jennifer Bort Yacovissi’s debut novel, Up the Hill to Home, tells the story of four generations of a family in Washington, DC, from the Civil War to the Great Depression. Jenny is a member of PEN/America and the National Book Critics’ Circle and writes a monthly column and reviews regularly for the Independent. She served as chair of the 2017 and 2018 Washington Writers Conference and, for several recent years, was president of the Annapolis chapter of the Maryland Writers Association.

A look back at the pages I’ve perused these past 12 months.