Reading tales of the Titanic in an age of disaster. 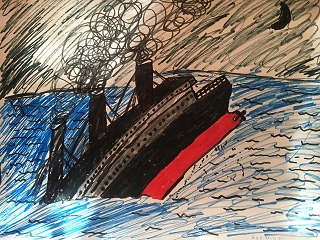 Last week, my advanced fiction workshop at George Mason University finished discussing the final student stories for this first half of the semester. The class boasts a fine bunch of writers — imaginative and ambitious.

The last stories submitted included one about a pirate mutiny with some gender shifting and gender conflicts, and then another, a speculative tale, followed rebel forces against a tyrannical government intent on keeping its people divided and controlled. (I hear you right now saying, “speculative?”)

One student in the class aims to write for younger readers, and the draft she submitted — closing out this first-round workshop — focused on two kids on the Titanic, with dramatic irony driving the story start to finish.

Her story is told from the perspective of an 8-year-old girl whose family is traveling in third class, and it explores, in part, some of the differences in those class accommodations, from first arrival on the ship, through scenes of the kids sneaking peeks at life among the upper crust, toward the ship’s final fate — an especially mad rush since the third-class accommodations have been gated shut so the first-class folks can enter the lifeboats first.

My son, Dash — coincidentally, also 8 — went through a phase about a year ago where he focused on all things Titanic. During personal reading time in his second-grade class, he’d read the Magic Treehouse book Tonight on the Titanic, which sparked not only an interest in that series (we’ve read many since!) but also an obsession with the subject generally.

We bought a couple of nonfiction books on the Titanic at the last in-person Scholastic Book Fair we attended, and Dash has drawn several pictures of the ships — including one on our refrigerator now, “for Mom” — and he’s built at least three LEGO versions, including one with a hinged middle to mimic the way the ship broke in half before sinking out of sight.

As part of our push to keep Dash both educated and busy during our many months at home, I tried one day to set up a Titanic study session — with a short documentary on the subject, plus related activities. And since my wife, Tara, and I enjoy escape rooms, I was thrilled to find Escape This Book! Titanic by Bill Doyle and illustrated by Sarah Sax (actually, by Sarah Sax “& You,” as the cover emphasizes).

The tagline proclaims, “Draw Yourself Into And Out of History,” and the book combines a “choose your own adventure” approach (choose passenger, crew member, or stowaway from the start) with various activities that have to be completed to make your escape — drawing images, tearing pages, completing puzzles, and more…and the clock is ticking!

During the Zoom workshop with my student last week, I held Escape This Book! Titanic up to the camera for her — for several reasons. Our class talked a bit about the challenges of writing on a subject that’s been covered so many times and has such a foothold in the shared cultural imagination, and I wanted to praise the student for her own treatment and the ways that it shed light on the history.

Plus, I thought she might want to check out the escape book herself, not only to see how another author handled a similar perspective but also to maybe have a little fun — because don’t we all need it?

Speaking of fun, another bit about that Magic Treehouse book. A couple of weeks back, Dash rushed from his bedroom, where he’s taking all of his own classes virtually, to tell us that his elementary school library was opening up for curbside pickup, and he’d already ordered Tonight on the Titanic because he wanted to read it aloud to us.

The designated pick-up day was last week, so all three of us piled into the car to go get it — pulling into an up-close spot, propping the “Taylor” sign in the front window, putting on our masks, and rolling down the window for the school librarian — also masked — to hand the book across, and…

I’d begun this column thinking that it would be a lighter one, but looking back at it, I see other patterns emerging.

Zoom classes because none of us can meet in person. The image of me holding a book up to the camera to share with my students. That other image of handing off books drive-thru style during a masked, curbside appointment at an elementary school.

A student story about class divisions with life-or-death stakes. A story of children separated from their parents with gates dividing them.

Looming disaster, the shadow of a grim survival rate, a race against the clock to escape.

And at the core of it all — inescapably, it seems — that same steadily sinking ship.

Dash has already started reading Tonight on the Titanic to us.

We know how the story concludes, but we can’t wait to see how it ends.

Art Taylor is an associate professor of English at George Mason University and the author of the story collection The Boy Detective & The Summer of ’74 and Other Tales of Suspense and of the novel in stories On the Road with Del & Louise. He has two stories — “Better Days” and “Hard Return” — in contention for the Anthony and Macavity awards later this week at Bouchercon, the World Mystery Convention, hosted virtually this year, of course.

The pleasure of listening to Katherine Hall Page’s Small Plates.