Winter in fact and fiction 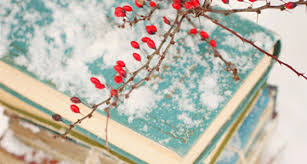 As I’m finishing up this column, the meteorologist I follow (Eileen Whelan at WJLA/ABC7) has promised that “an arctic front will dive in from the north this evening and will usher in frigid and windy conditions for the weekend.”

All week I’ve been watching those high temperatures on the forecast sloping into the 20s, the wind chills plunging those numbers even lower. By the time the column actually appears, the forecast calls for higher temperatures…but a fresh round of snow and ice.

For me, winter conjures up images of reading. Certainly summer does something similar, if more specific — the whole notion of the “beach read,” for example — but winter’s charms are more pervasive, tinged with nostalgia and with a warmth of imagery that stands in marked contrast to the chills outside.

Conjure in your mind a snowy day and a frost-tinted window, a warm fire in the hearth, a mug of hot chocolate or tea by your armchair, and a big book to get lost in. Such a scenario is surely part of what drove an earlier feature here at the Independent: “8 Long Reads for Even Longer Winter Nights.”

But instead of books for winter, how about books about winter, or with snow and ice figuring in them? Plenty out there, of course — and here’s a sample of some great passages about wintry weather, from some books and stories that are favorites of my own (and yes, given my interests, with a leaning toward crime fiction):

“At first her reading made no progress. The fuss and bustle were disturbing; then when the train had started, she could not help listening to the noises; then the snow beating on the left window and sticking to the pane, and the sight of the muffled guard passing by, covered with snow on one side, and the conversations about the terrible snowstorm raging outside, distracted her attention. Farther on, it was continually the same again and again: the same shaking and rattling, the same snow on the window, the same rapid transitions from steaming heat to cold, and back again to heat, the same passing glimpses of the same figures in the twilight, and the same voices, and Anna began to read and to understand what she read.” — Leo Tolstoy, Anna Karenina

“Frog knocked at Toad’s door. ‘Toad, wake up,’ he cried. ‘Come out and see how wonderful the winter is!’” — Arnold Lobel, Frog and Toad All Year

“Do you hear the snow against the window-panes, Kitty? How nice and soft it sounds! Just as if some one was kissing the window all over outside. I wonder if the snow loves the trees and fields, that it kisses them so gently? And then it covers them up snug, you know, with a white quilt; and perhaps it says, ‘Go to sleep, darlings, till the summer comes again.’” — Lewis Carroll, Through the Looking Glass

“And there were other sensations, less definable but more exquisite, which drew them together with a shock of silent joy: the cold red of sunset behind winter hills, the flight of cloud-flocks over slopes of golden stubble, or the intensely blue shadow of hemlocks on sunlit snow. When she said to him once: ‘It looks just as if it was painted!’ it seemed to Ethan that the art of definition could go no farther, and that words had at last been found to utter his secret soul…” — Edith Wharton, Ethan Frome

“The snow in the mountain was melting and Bunny had been dead for several weeks before we came to understand the gravity of our situation.” — Donna Tartt, The Secret History

“It was bitter cold, and the ground had all the hard black look of frost. Not white frost, to shine in the morning sun, but the black frost that the east wind brings. The sea, fiercer now with the turning tide, white-capped and steep, broke harshly in the bay. Of the birds there was no sign. Not a sparrow chattered in the hedge beyond the garden gate, no early missel-thrush or blackbird pecked on the grass for worms. The was no sound at all but the east wind and the sea.” — Daphne du Maurier, “The Birds”

“His soul swooned slowly as he heard the snow falling faintly through the universe and faintly falling, like the descent of their last end, upon all the living and the dead.” — James Joyce, “The Dead,” Dubliners

“‘Come, Watson,’ said he, and we passed from that house of grief into the pale sunlight of the winter day.” — Arthur Conan Doyle, “The Adventure of the Missing Three-Quarter,” The Return of Sherlock Holmes

What are your own favorite wintry-themed reads or favorite passages on wintry weather? Tell me about them in the comments section below!

Art Taylor is author of On the Road with Del & Louise: A Novel in Stories, recently named a finalist for this year’s Agatha Award for Best First Novel. Here’s a quote on winter from his own book: “Winter days in Williston are short. Most days the sun doesn’t rise until after 8:30, and it goes down again just after five. Even then, snow is more frequent than sun, and the cold is bitter. The door of the Mustang regularly froze shut, and that soft top I’d wanted so badly creaked and crinkled at every turn, like the ice had twisted itself into the fabric. My skin chapped, cracked, tore. But none of it was as cold and dark as I felt inside.”

The Beauty of Brevity

In praise of tales that cut to the chase