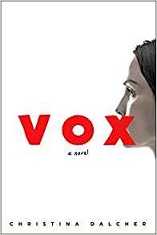 I’m K.L. Romo — a book reviewer, novelist, and freelance writer who loves to read. I am passionate about women’s issues and the power of women’s voices. This new column is dedicated to kick-ass women — both writers and heroines.

People speak approximately 16,000 words a day. What if we were limited to only 100? Christina Dalcher bases the story of VOX on this premise — but it only applies to women. Men have grown tired of women’s protesting voices and the way they believe they are equal to men. Not only is their speech limited, but the law prohibits women from holding jobs outside of the home or reading anything other than the Bible. Women have finally been relegated to where they belong.

In our country’s current political climate, some are experiencing a ripple of fear running under the surface of our existence. How safe are we women, and how dangerous is political apathy?

In VOX, cognitive linguist Dr. Jean McClellan, along with all other women and girls, is not allowed to speak more than 100 words a day. “One, zero, zero.” If she utters word 101 before her counter returns to zero, it delivers a shock that will scar her wrist (or char it, depending on the number of extra words).

When President Sam Myers was elected, guided by his fundamentalist Christian advisor Reverend Carl Corbin, the Pure Movement began. The government removed women from their jobs so they could properly care for their families, and abolished their access to most anything with words — books (yes, even cookbooks), email, writing utensils and paper, cellphones. Voice.

VOX asks the question, “What would you do to stay free?”

I recently picked the author’s brain:

You’re a linguist who has used your voice and love of linguistics to write an entertaining and thought-provoking story.

“The real beginning of VOX was a 750-word piece of flash fiction I wrote for the Molotov Cocktail’s doomsday-themed contest. As for the uncanny timeliness, I started (and finished) VOX well before the #MeToo movement came into being. Women had become louder than they ever had, and I wondered if there were some people, somewhere, who said to themselves, ‘Man, I wish they would just shut up.’”

You’ve used your training by including science in your fictional tale.

“[It] entertains, but…also makes us think about the world differently. All that said, I should probably let you know that some of the ‘science’ in VOX is completely speculative!”

One disturbing aspect of the novel is that Jean’s initial failure to use her voice to speak out against injustice resulted in her having almost no voice at all.

“That’s it! That’s the irony of VOX. Jean’s loss of her voice — both her literal ability to speak and her ability to participate as an active member of society — is closely tied to the notion of a critical period for language acquisition, a ‘use it or lose it’ stage. We humans take our linguistic abilities for granted…and I wanted to explore [the] sociopolitical backlash and the frightening premise of regressing to a culture where women didn’t have much of a voice.”

It's apparent that VOX echoes some of the attitudes in our country’s current climate. Many in our society equate free speech with so-called “fake news” and believe it should be curtailed. Has VOX sparked negative criticism for addressing our current political climate and its detrimental effect on freedom and human dignity?

“Sure — every writer gets criticism, and that criticism comes from all corners. There are some readers who mistake my use of an extreme fundamentalist group as an antagonistic force to mean that I’m anti-Christian. Not the case. But there are also readers who have pointed out that it’s not only the conservative factions who are trying to silence people, and that’s a fair hit — we’re seeing all kinds of efforts to shut up voices in the U.S. these days, many on the right, many on the left. [I chose] to create a scenario where the 19th-century Culture of Domesticity experienced a renaissance.”

One of the most chilling aspects of the novel is the indoctrination of youth, reminiscent of the rise of the Nazi party.

“That was a chilling part for me, as well, probably because indoctrination of youth is such a well-honed tool in revolutionary tactics…if you want to change the world, you don’t start with the adults, you start with the kids. They don’t have the benefit of having lived through historical horrors. There’s also a nice parallel in VOX between sociopolitical change and language change. Language is in constant flux, but changes are almost always instigated by the younger generations.”

VOX expertly portrays political apathy in our society and the importance of paying closer attention to our world.

“I don’t like to get all preachy about voting, but the hard and cold fact is that just over half of eligible voters actually hit the polls on Election Day. And that’s for the big contests, the presidential elections. Despite all the hype about the importance of the 2018 midterms, the national turnout was still below 50 percent (a 50-year high). The fact is, things don’t stay the same in any sphere: politics, language, relationships, and so forth. I think we have a tendency to wake up each day expecting the world around us will be exactly the same as it was the day before, but surely history informs us that isn’t always the case.”

“Dystopian fiction is tricky — the genre often involves a common theme of authoritarianism versus the individual, so we’re always going to see similarities between works like Brave New World, 1984, and Fahrenheit 451. As soon as we make that oppressed individual a woman, we narrow the field down considerably, and it’s inevitable that readers will draw parallels. VOX, though, is a page-turning thriller with a fairly strong message — use your voice while you’ve got it!

I love this book. You go, girl!

K.L. Romo writes about life on the fringe: teetering dangerously on the edge is more interesting than standing safely in the middle. She is passionate about women’s issues and loves noisy clocks and fuzzy blankets, but HATES the word normal. Find her on Twitter at @klromo.