On Rotation has lots of laughs…and bite. 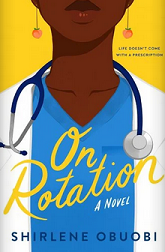 “The worst thing I ever did was grow an ass.”

This is the sassy first line in physician, cartoonist, and author Shirlene Obuobi’s debut novel, On Rotation.

Obuobi wrote the book for “the Black nerdy girls, who were led to believe that who they were was an anomaly. For the 4 percent of medical students in the US who are Black women. For the dark-skinned girls for whom self-love is a continued process.”

Obuobi called on her own experiences to style a narrative that reads like a talk with a best friend. Her witty, irreverent take on the world is as insightful as it is funny. She uses her story to focus the spotlight on not only the disparity in America’s healthcare system, but also racial inequality in the medical profession. The book is both a romantic comedy and an inspiration for underrepresented groups determined to change the status quo.

In the novel, a large derriere has plagued Ghanian American medical student Angie Appiah ever since puberty, when it attracted the unwanted stares of boys and men alike. Angie struggles to fulfill her parents’ wishes that she become a doctor, but being a committed student and bookworm has done nothing for her love life. Not that she’s ready to give up on romance, especially when she meets Ricky Gutierrez…

What was your inspiration for On Rotation?

I wrote On Rotation after attending a talk by Junot Díaz, during which he encouraged writers of color to write from experience. “Write what you know” is an adage that is shared amongst all writers, but for those of us who have “specific” (read: nonwhite, cisgender, straight) perspectives, writing what we know often leads to us being told that our work is autobiographical. I’d been in writing critique groups and creative writing circles where that accusation would get thrown around whenever I tried to write a Ghanaian American female character, so for a long time, I shied away from it. Diaz gave me permission to do what everyone else does. It was freeing.

What significance does Angie’s “ass” play in the story?

A huge aspect of Angie’s insecurity stems from being sexualized from a very young age. Dark-skinned Black women are rarely portrayed as deserving of romantic love — even Black-led media often casts only light-skinned women as viable love interests. When we are presented as attractive, so often, it is only in this sexual, primal way. I could write a whole essay about desirability politics and how they warp the dating scene for women who don’t fit Western beauty standards, but I’ll just say this: Angie, who is dark skinned and voluptuous, often finds herself dehumanized and fetishized in her romantic entanglements with straight men.

Despite her posturing, Angie is terrified of committing herself emotionally to someone only to find they intended to be with her for the experience, or worse, that they do have feelings for her but are worried about how they’ll be perceived with her as their partner. It’s a bit more traumatizing than your standard romantic insecurities, and something I bet fat women, dark-skinned women, and non-gender-conforming people, etc., can relate to.

Talk about Ghanaian parents’ expectations and trying to be “the perfect immigrant daughter.”

I don’t want to put all Ghanaian parents under one umbrella, but for immigrants, self-determination often takes a back seat to survival. Angie’s parents have worked hard to give her a comfortable lifestyle — in the book, Angie isn’t preoccupied by money, something that is not all that relatable and only made possible by her parents’ grind. They expect her to also take on that grind. Many first- and second-generation immigrants will find the tension between Angie and her parents achingly familiar.

My parents realized they couldn’t stop me from doodling and writing stories, so they’ve largely been supportive. But to be fair, the story might have been different had I told them I wanted to pursue writing as my sole career.

Why is a “sanity circle” so important to have?

I will always emphasize platonic relationships in my books because they’re even more critical to personal development than romantic ones! Despite her insecurities, Angie is a confident person with an established sense of self, and I couldn't have written her that way without her having a strong group of friends. I’ve been lucky enough to have grown up with multiple sanity circles, and I don’t think I could’ve made it through medical training without a group of people who let me be myself.

Tell us more about how you express yourself through your comics, and how ShirlyWhirl came into being.

I love comics as a medium — they are so efficient at communicating ideas! The visual component is like a mine of information, so you can spare your words to great effect. ShirlyWhirlMD came about while I was attempting to process my medical school experiences. I was just drawing for friends back then, and my best friend suggested I post them online. She’s the one who convinced me to get an Instagram account. The rest is history.

How does creative expression help medical students deal with stress?

Implicitly or otherwise, the medical field teaches students that their ability to endure is correlated to how good of a doctor they will be. Many of us come into medicine with other talents, interests, and strengths that we are discouraged from pursuing, so we become less tolerant, less empathetic, and less in touch with our humanity.

There are few things more human than creative expression. Making something just to make it, not just because it’ll get you into this residency or add a line to your résumé. It helps encourage introspection that might not otherwise happen.

I want readers to walk away with new knowledge about the experiences of medical students and especially Black female ones, healthcare disparities, and Ghanaian culture. I hope that readers take the time to live in Angie’s head and understand that she moves through the world differently than many of the protagonists we’re used to seeing in romance. Also, On Rotation is a coming-of-age story at its core, so I hope readers learn or recognize some of the lessons Angie does as she grows throughout the novel.

A dogged heroine struggles to untangle herself from the mysterious Vine.