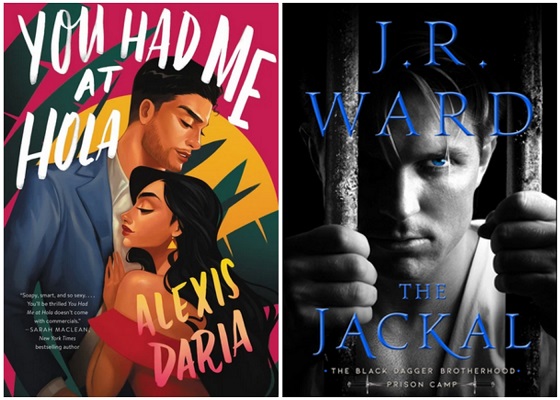 We lost power for about 18 hours during a big storm last month, and I read an entire book that day. Maybe it’s pandemic stress, but reading like that (or much at all) has been a rarity these last six months.

As we roll into autumn amidst this “new normal” (gah, I hate that term), I’m hoping to carve out more hours for reading. Because reading brings joy — and the ability to escape, if only for a little while, the weirdness of our current situation. Here are a couple of the books that brought me joy this month.

Growing up in south Florida, I spent a lot of time watching telenovelas on Univision, so I couldn’t wait to read Alexis Daria’s You Had Me at Hola (Avon). I’m happy to say Daria’s story is everything I love about romance and telenovelas!

Soap-opera actress Jasmine Lin Rodriguez has been dumped by her rock-star boyfriend and hounded by the paparazzi, but now she is determined to put her messy past behind her and focus on her career. Landing the lead role in the new streaming series “Carmen in Charge” seems like the perfect opportunity to grow as a leading lady and move forward with her life — without a man to mess up her plans.

Enter Ashton Suarez, Jasmine’s sexy new co-star on the show. He’s a telenovela superstar hoping to break out of that niche market and into mainstream fame. He is also hyper-protective of his private life — and for good reason. Ashton is afraid to get too close to Jasmine out of concern for his privacy, and that of his family in Puerto Rico. But the attraction between the two actors is immediate and incendiary, both on- and off-screen.

Daria’s writing is fresh and clever, and the plot is threaded through with Latinx culture and an empowering feminist message. Parts of the story are told from the perspectives of the TV characters Jasmine and Ashton play, which is an interesting twist. These story-within-a-story sidebars give the book an added layer of soapy showbiz authenticity while also highlighting the budding romance between Jasmine and Ashton.

Daria had me at telenovela, but I stayed for the steamy romantic comedy. You Had Me at Hola stars two lovable leads and a thoroughly entertaining cast of supporting characters who stay with you long after the screen goes dark.

Speaking of screens, I’ve loved vampires since I first saw Frank Langella play Dracula on the big one in 1979, and J.R. Ward is one of the best at crafting badass vampires I wouldn’t want to meet in a dark alley. (Or would I?) Now, she’s back with The Jackal (Gallery Books), the first book in an exciting, edgy new spin-off series set in her Black Dagger universe.

The story centers on Nyx, whose older sister, Janelle, was imprisoned by the glymera (vampire aristocracy) 50 years ago in their subterranean prison system. When Nyx discovers a way into the underground tunnels, she goes in search of her sister — and encounters the Jackal.

The Jackal has been in the glymera’s prison for almost a century and has no hope of ever gaining his freedom. Finding Nyx in the tunnels is an unexpected surprise, a bright light in the Jackal’s prison of darkness. He is determined to help her find out what happened to her sister — and then get her back to safety aboveground.

Nyx and the Jackal are destined to part soon, and neither of them can risk getting emotionally attached, but that doesn’t prevent them from falling in love and facing the darkness together.

The Jackal is a promising launch to Ward’s Black Dagger Brotherhood: Prison Camp series. Fast-paced, a little dark, and packed with all the action and romance Ward is known for, this is a must-read for BDB fans. Anyone new to Ward’s work will still enjoy the world-building and the relationship between Nyx and the Jackal but will want to take advantage of the glossary to understand the inner workings of the author’s paranormal universe.