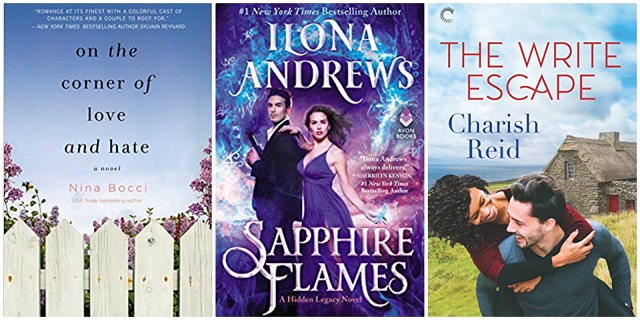 Fall is in the air — finally — and I’m working my way through my late-summer TBR pile. This month, I’m reviewing three recent romance novels I have loved, including a small-town romantic comedy, a dazzling paranormal fantasy, and a travel romance that has me yearning to book a trip to Europe!

First up is the delightful romantic comedy from Nina Bocci, On the Corner of Love and Hate (Gallery). This is the promising first book in Bocci’s Hopeless Romantics trilogy, all set in the small town of Hope Lake, Pennsylvania.

Emmanuelle “Emma” Peroni works for the Community Development Office in Hope Lake, where her father is also the mayor. Her friend and coworker Cooper Endicott is planning to run for office and carry on Emma’s father’s legacy. But Cooper has a problem — he’s caused more than his share of scandal in the town, and his colorful history may be a sticking point for its old-fashioned voters.

Emma is recruited to run Cooper’s mayoral campaign, which leads to a number of uncomfortable and antagonistic moments. Emma grew up as “just one of the guys” with Cooper (and their friends Henry and Nick), and she has some unresolved history with Cooper that makes him more frenemy than pal.

The situation becomes increasingly comical as Emma and Cooper work together on his campaign and their attraction becomes undeniable. Thankfully, the supporting characters are there to help the unwitting pair realize what they have in each other.

Bocci has crafted a near-perfect romantic comedy with an appealing setting and plenty of tension-building snark between Emma and Cooper. Who knew local politics could be so sexy? On the Corner of Love and Hate is a lovely introduction to a new series, and I can’t wait to revisit Hope Lake.

Fans of the married couple who write as Ilona Andrews have come to expect multifaceted characters and incredible world-building — and they’ll find plenty of both in Sapphire Flames (Avon), the first book in a new trilogy in Andrews’ Hidden Legacy series.

Catalina Baylor is a Prime mage, private investigator, and the new Head of House Baylor. She’s pulled into a dangerous investigation by her friend and ally, Prime mage Runa Etterson. Runa and her brother, Ragnar, are the last of their House, and they want Catalina to investigate the deaths of their mother and sister.

Catalina faces a powerful enemy with terrifying power who doesn’t want her investigating the Etterson deaths. Her teenage crush, Prime mage Alessandro Sagredo, is an Italian playboy with his own impressive magic, and he tries to convince her to walk away from the investigation.

But Catalina’s House is at risk, and she can’t stop until she untangles the truth, so Alessandro convinces her they should work together. In the thick of danger, the chemistry between them makes for a lot of clever banter and some decidedly steamy moments.

This paranormal romance set in a world of warring families is peak Ilona Andrews. Catalina is a heroine to love — strong-willed, independent, and loyal — and Alessandro is the irresistible and powerful partner she doesn’t know she needs. Their story is only just beginning, and I’m excited to see how it plays out as the series continues. (Readers will benefit from reading the earlier books in the series but can enjoy Catalina’s story even if this is their introduction to Andrews’ work.)

The Write Escape (Carina Press) by Charish Reid is a book after my own heart! In it, an editor/writer falls for an Irish literature professor in a charming rural village in Ireland.

Antonia Harper had it all: a career in Chicago as a literary-book editor, a rich fiancé, and a passion for writing romance. Then she loses her job and discovers her future husband is cheating on her, and everything unravels. She decides to take her honeymoon alone and escapes to a quaint village in Ireland, hoping to sort out her problems, finish the novel she’s writing, and start over.

Aiden Byrnes is a literature professor from Galway who happens to be staying in the cottage next door. He’s dealing with work pressures, but he is immediately smitten by the beautiful African-American woman. She’s equally intrigued by the handsome Irish academic, which sparks a holiday romance — and some fascinating conversations about literature, culture, history, and race — after an awkward but amusing start.

Antonia and Aiden bring their own personal and professional baggage to their budding relationship, which they manage to sort out like grownups. The secondary characters do an adequate job moving the story along, but it’s the setting that really makes this romance so swoon-worthy! The Write Escape is pure escapism — and perfect reading for a chilly autumn night!

Kristina Wright lives in Virginia with her husband, their two sons, a dog, a new puppy, a cat, and a parrot. She’s the digital editor of Your Teen Magazine and a regular contributor to BookBub. Her work has appeared in a variety of publications, including the Washington Post, USA Today, Cosmopolitan, and more. Find her on Twitter at @kristinawright and tell her what you’re reading this fall!