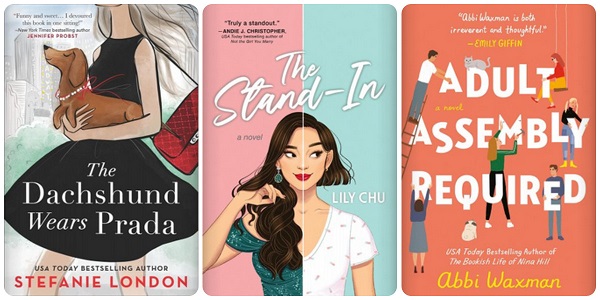 It’s the last week of school for my kids (and my husband, the teacher), and I don’t think I’ve ever been so ready for summer. (I will also enjoy not having to pack lunches Every. Single. Day.) Whatever your summer plans, be sure to make time for a little romance! Here are a few of my favorites this month.

The Dachshund Wears Prada (HQN), the first book in Stefanie London’s Paws in the City series, features a show-stealing dog and a Manhattan backdrop. What’s not to love?

After the death of his beloved grandmother, Theo Garrison is left alone in the world. Alone, that is, except for his grandmother’s dachshund, Camilla. Camilla is more than a handful, and Theo is in desperate need of a dog sitter who can manage the tiny beast.

Isla Thompson is a publicist whose career has just gone up in flames. She accidentally livestreamed a teen starlet’s meltdown, and the mistake has left her unemployed — and unemployable, at least in the entertainment industry. She badly needs a job because it’s not just her life she’s ruined; she also has to take care of her teenage sister, Dani. Camilla shows up at just the right moment, and when the notoriously difficult dog decides to play nice for Isla, Theo offers her a job.

The meet-cute leads to a friendship that blossoms slowly and sweetly into more for the reclusive Theo and the fiercely independent Isla. They’ve both been hurt by life and loss, but the spark between them offers a promise of something more. When Isla creates a social media presence for Camilla, and the dachshund goes viral, Isla will have to face her past — and Theo, who still blames the paparazzi for the accident that killed his parents when he was a child.

Chinese Canadian Gracie Reed leads an average life in Toronto, working for a sexually harassing jerk and caring for her mother, who has dementia. Gracie discovers she’s a dead ringer for Chinese celebrity Wei Fangli, who just happens to be in town, when she’s mistaken for the star.

When Gracie’s awful boss fires her, it seems like her lucky day when Fangli shows up to make her an offer she can’t refuse: impersonate the burned-out actress at publicity events and rake in a pile of cash. Gracie needs the money to help her mom, but she’s also intrigued by the idea of being Fangli, if only for a while. What must it be like to be someone people listen to and take seriously?

Gracie accepts Fangli’s offer despite the protests of Fangli’s best friend and co-star, the ridiculously sexy (and arrogant) Sam Yao. Sam wants nothing to do with Gracie at first. But he’s the most attractive man she’s ever met, and their forced proximity means getting to know each other behind the scenes — which makes for some awkward (and funny) bumps along the way.

Chu’s enchanting spin on this classic Cinderella tale makes it uniquely her own. Gracie and Sam come from different worlds, but they connect on a level neither has experienced before. They also both care about Fangli, who clearly needs more than just a vacation to set things right. The author deftly handles the complexities of celebrity culture and mental health in a believable way and creates a romcom that seems destined for the big screen. (Hint, hint, Hollywood.)

Abbi Waxman’s intrepid heroine has to find herself before she can find love in the heartwarming and hilarious Adult Assembly Required (Berkley).

Laura Costello left her New York home and her smothering, over-protective family to start a new life in Los Angeles. Inspired by her experience following a horrific car accident, she plans to go to grad school to become a physical therapist. And nothing — not her concerned family or her annoyingly determined ex-fiancé — will stop her. Of course, no sooner does she get to L.A. when a fire in her apartment building leaves her without a place to live.

Still in shock from her loss, Laura wanders into Knight’s Bookstore, where she meets booksellers Liz, Nina, and Polly. Polly knows there’s a room for rent in the house where she lives, so she spirits the despondent Laura off to meet her landlord, Maggie. A retiree, Maggie is an empty-nester who has (illegally) opened her home to a variety of quirky, fabulous tenants, and Laura quickly settles in with everyone, including drop-dead-gorgeous resident gardener Bob. Laura is focused on her academic and career goals and doesn’t have time for a relationship, but with a nickname like “Impossibly Handsome,” Bob slowly but surely wins her over.

While Adult Assembly Required leans more toward women’s fiction than romance, the slow burn between Laura and Bob contributes to its witty, feel-good vibe. Fans of Waxman will recognize several of the wonderful supporting characters, and readers new to her work will want to pick up her backlist after devouring this delightful novel.