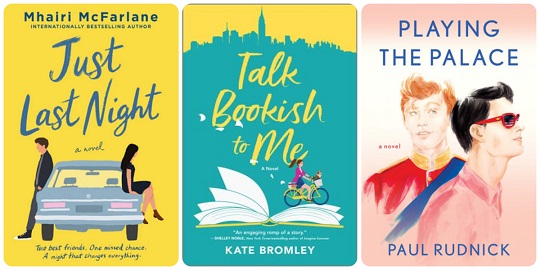 As I’m writing this, it’s Memorial Day Weekend, and I can honestly say I’ve never been happier for the (unofficial) start of summer! There’s a feeling of anticipation and hope in the air as we edge closer and closer to something like normal life again. I’m excited! I’m also excited about all the fantastic romance novels hitting the shelves this year. Here are a few of my favorites from the past month. Happy summer!

Mhairi McFarlane returns with another must-read tale of life, loss, friendship, and finding love when you least expect it in Just Last Night (William Morrow).

Eve Harris has been friends with Susie, Ed, and Justin since they were teens. But the close-knit group is shattered when Susie dies one night after being hit by a car.

Susie’s estranged brother, Finlay, left Britain for America, and her father has Alzheimer’s, so Eve takes on the responsibility of planning Susie’s funeral. She’s doing her best to cope with the loss of her friend and prepare for the service when she comes across her name in a box of Susie’s old letters and journals. What she reads leaves her heartbroken and angry — and makes her question not only her friendships but what she wants for her life.

Finlay’s arrival adds another layer to Eve’s issues as she begins to see beyond her own limited relationship with Susie and into the family dynamics that drove Finlay away. Eve often hears Ghost Susie in her head offering witty commentary and insight that, now that she’s looking for it, give Eve an entirely new perspective on her old friend.

Eve is a likable and relatable protagonist backed by a terrific cast of secondary characters. There is a romance, but it comes midway through the story and blossoms slowly as Eve starts to untangle the questions left by Susie’s sudden loss. McFarlane weaves a believable tale of friendships upended by grief and shows how, even in the aftermath of unexpected tragedy, love prevails.

Kate Bromley’s debut novel, Talk Bookish to Me (Graydon House), is a fast-paced, enjoyable tale of a romance novelist finding her own happy-ever-after.

Kara Sullivan is a successful author who’s getting ready to leave on an exciting trip to Italy — right after she turns in her next manuscript and her best friend, Cristina, gets married. The wedding is set to go off without a hitch; the manuscript, not so much. Kara can’t manage to write anything at all, even while her deadline (and career failure) looms. She needs to finish the book, but she can’t seem to break her writer’s block…until her ex-boyfriend from college, Ryan Thompson, shows up.

Kara hasn’t seen Ryan in a decade, and now she’s forced to be in close proximity with him because he’s one of the groomsmen in the wedding. Despite the awful way their relationship ended, being around Ryan makes Kara want to write for the first time in ages. Could he be the inspiration she needs to finish her book?

When Ryan and his lovable, high-maintenance dog need a place to crash until the wedding, it seems like a win-win situation for him to stay at Kara’s apartment. But there’s no denying the physical attraction and complicated feelings that still linger after all these years.

Before they can have a new beginning, Kara and Ryan will have to face the truth about their breakup and resolve their past — and present — issues. Bromley does a nice job building a clever, quirky, second-chance romance layered with plenty of emotional baggage to unpack and resolve, as well as an abundance of heart and humor.

Fast approaching 30 and just out of another disappointing relationship, New York City event planner Carter Ogden is unhappy with his very average life. He wants more for himself — so much more. But when he unexpectedly meets a real-life prince, Carter will discover that living a big life requires taking big chances.

Edgar, the Prince of Wales, is visiting New York on behalf of a charity. He’s the kind of handsome, do-good, storybook prince that makes him an excellent catch — and so far out of Carter’s league that Carter can’t even imagine what being near him would look like. Until it happens.

When the two meet by accident, the chemistry is undeniable; romance is in the air for the party planner and his Prince Charming. But with every move the couple makes being potential tabloid fodder, the logistics of making this unlikely love affair a success casts a dark shadow over their newfound happiness.

Carter is a funny, neurotic, lovable protagonist. He’s a little lost in Edgar’s world of international politics and celebrity, but that doesn’t stop him from trying to fit in and win over their detractors (including the queen of England herself). Edgar is used to living in the spotlight, but Carter gives him something money and the monarchy can’t: true love. Rudnick’s cast of oddball characters and the fresh, frothy storyline make for an entertaining summer page-turner.