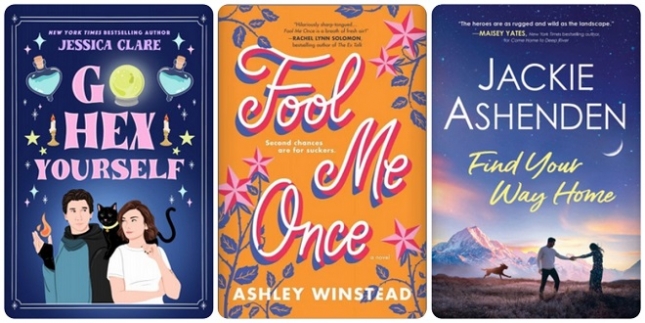 May is my birthday month. There will be many book purchases made, followed by the excuse, “It’s my birthday!” This is either a cautionary tale or a brilliant life hack — you be the judge. In the meantime, here are the romance novels I’ve enjoyed recently. Happy birthday to me!

Halloween is still six months away, but Jessica Clare makes us believe in not-so-dark magic in the bewitching Go Hex Yourself (Berkley).

Reggie Johnson needs a job to pay off her family’s debts, so she eagerly applies for what she believes is a position working for the company that makes her favorite card game, Spellcraft. Instead, she’s landed a job as a familiar for an ancient witch, Drusilla Magnus. Of course, Reggie doesn’t believe in magic, but it doesn’t take long before she has to face the fact that her elderly employer may be eccentric, but the magic world is very, very real.

Ben Magnus is Dru’s handsome nephew, a notorious warlock with a bad reputation. He doesn’t think Reggie has any place in their world and is hoping she’ll run off screaming into the night. When she stays put, he eventually warms to the idea of having a human in their midst — especially as their mutual attraction grows. There’s also the not-so-unlikely possibility that Reggie may have her own untapped magical talent.

The romance unfolds at a leisurely pace, leaving plenty of time for Reggie to understand the supernatural world Dru and Ben inhabit. Reggie’s troubling backstory and her determination to roll with her unusual circumstances makes her a likable and sympathetic character. Sexy, brooding Ben is the warlock we wouldn’t mind running into in a dark alley, but he also has a vulnerable, protective side that makes him worthy of Reggie’s love. The snarky banter and paranormal elements make for a fun, otherworldly romance with plenty of heart.

Talented thriller writer Ashley Winstead proves she has the chops for romantic comedy in the sparkling political charmer Fool Me Once (Graydon House).

Lee Stone is a force to be reckoned with. By day, she’s the director of communications for a women-run electric car company who is pushing to get a green energy bill passed in Texas. By night, she’s “Stoner,” a lady who likes to drink and knows how to have a good time with the guys — no strings attached. When she finds out the governor has hired a new policy director, she’s ready to do whatever it takes to get the energy bill passed.

Of course, the new policy director turns out to be Lee’s former grad school boyfriend, Ben Laderman. Their relationship didn’t end well, and now they have to work together to get the bill passed. Talk about awkward.

Lee, for all her professional success, is a bit of a hot mess, and Ben is the guy she never really got over. Burned by love, unable to trust her heart, she’s put all her focus on her career. Then Ben comes along when she least expects it — and needs it most. There’s plenty of humor and sexual tension is this winner of a romcom, but it’s the characters, with their real flaws and issues, that make Fool Me Once a particular standout this season.

The first book in Jackie Ashenden’s Small Town Dream series, Find Your Way Home (Sourcebooks Casablanca), is a memorable contemporary romance that reads like a love letter to the rugged beauty of New Zealand.

When her personal and professional life falls apart, Texas oil executive Isabella Montgomery is eager to put her failure behind her and forge a new path. When she learns of a small town in New Zealand seeking entrepreneurs to rejuvenate it, Izzy jumps at the chance to make a fresh start in Brightwater Valley. She gets off on the wrong foot, though, when she immediately butts heads with hometown hero Chase Kelly. As an outsider, Izzy is hellbent on forging her own path in this small community, but she’s going to need Chase’s help to get there.

An ex-paratrooper and single dad to a tween daughter, Chase is also the owner of a local wilderness-adventure company. He’s determined to help bring in new business and put Brightwater on the map — but a city princess like Izzy isn’t what he had in mind. He’s been burned by love (his wife left him and their daughter years ago), but there’s something about strong-willed Izzy he just can’t resist.

Chase is the good guy with a heart of gold who loves his daughter, his town, and his business, but he has a hard time opening up to Izzy. For her part, Izzy has learned to hold her own with any man, but it takes some time for her realize Chase is worthy of her affection. Find Your Way Home is a tender tale of taking chances and finding love where you least expect it.