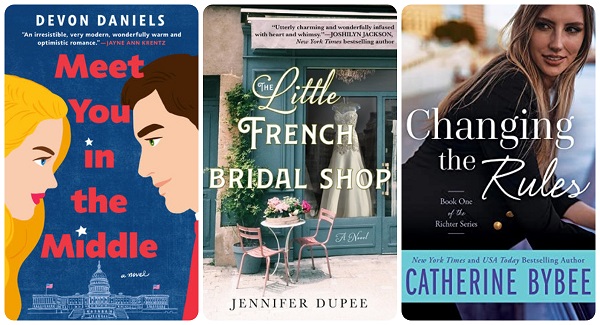 When I go on vacation, I have a habit of packing more books than I can possibly read. But I like to be prepared — after all, I never know what my mood is going to be or how much free time I’ll have. Though we’re staying home for spring break this year, my TBR pile is teetering on my bedside table with a variety of feel-good romantic reads. Here are a few that I’d happily pack in a suitcase.

The U.S. presidential election may be behind us, but politics and romance still make for a timely and entertaining romcom in Meet You in the Middle (Berkley). Kate Adams is on the left side of the political aisle, while Ben Mackenzie skews decidedly (and infuriatingly, to Kate) to the conservative right. Their political differences put them at odds professionally — and make for some fiery debates — but can they find a way to meet each other halfway?

As a congressional aide for liberal Senator Carol Warner, Kate has spent the last year working hard on the Child Care and Education for Working Families Act. It’s an important piece of legislation, and Kate is determined to see it succeed. But to do that, she needs to convince her colleagues on the right, which isn’t going to be an easy task.

As the legislative director and gatekeeper for conservative Senator Hank Hammond, Ben is not enamored with Kate’s bill. Their first confrontational meeting sets the tone for their working relationship, but their arguing has an undercurrent of flirting and, soon enough, snappy banter gives way to the possibility of steamy romance.

In Kate and Ben, debut author Devon Daniels has created two headstrong, opinionated people determined to work for the greater good, even when they can’t agree on what that might be. Fans of “The West Wing” will be enjoy this charming enemies-to-lovers tale!

After losing her job and breaking up with her boyfriend, Larissa Pearl has returned to Elmhurst, her late aunt’s Massachusetts home where she made so many happy childhood memories. Her aunt has died, and Larissa is in town to organize the late woman’s affairs and put the house on the market. But after the impulsive purchase of a wedding dress and a whirlwind of small-town gossip, Larissa finds herself planning a wedding without a potential groom in sight.

Jack Merrill is also at a crossroads in his life, with a marriage in shambles and no place to live. He met Larissa years ago when she was a teenager, and he offers to help her renovate the home they both love. Living together at Elmhurst gives them an opportunity to open up to each other emotionally, but Jack is still trying to decide what to do about his marriage, and Larissa’s ex isn’t completely out of the picture yet. Is romance possible for people with such messy lives?

Despite its romcom potential, The Little French Bridal Shop is a complex story about two people whose lives haven’t gone quite the way they’d planned. Now they’ve reached middle age and are wondering what’s next. In order to move forward, Larissa is going to have to come to terms with her mother’s worsening dementia, while Jack will have to accept his role in his failed marriage and other damaged relationships.

In this tender and emotional debut, Dupee beautifully captures the highs and lows of midlife and the importance of family and community and delivers a thoroughly satisfying, hopeful conclusion.

Changing the Rules (Montlake), Catherine Bybee’s first book in her Richter series, is a fast-paced thrill ride of romance and suspense.

After years spent training at Richter, a private military school in Europe, Claire Kelly now works for Neil MacBain at MacBain Security and Solutions, an elite security team that handles assignments for wealthy, high-profile clients. Claire’s unique skillset makes her a worthy foe in any fight, but there’s more to this adrenaline junkie than meets the eye.

MacBain’s team is a family of sorts, one where Claire feels a sense of belonging and camaraderie. So, when her old friend Cooper Lockman rejoins the team after six years in the U.K., Claire is happy to be paired up with him for a potentially dangerous case. Neil tasks Claire and Cooper with an undercover job: infiltrate a California high school in order to stop a prostitution ring that’s trafficking young women.

Cooper is a sexy badass who has more than friendly feelings for Claire, which is part of the reason he spent so long in the U.K. They’re a good team, professionally and personally. They respect each other’s skills and have each other’s backs — important qualities in their dangerous line of work. Of course, working undercover together only serves to strengthen their bond and turn up the heat on the attraction growing between them.

Claire is a likable protagonist, and Bybee’s well-crafted plot makes for a fast-paced, friends-to-lovers tale. As the first book in a new series, Changing the Rules can be read as a standalone, but many of the characters (including Claire and Cooper) have appeared in the author’s previous series, making this an especially rewarding read for longtime fans.

Kristina Wright lives in Virginia with her husband, their two sons, two dogs, a cat, and a parrot. She’s the digital editor of Your Teen for Parents magazine, a regular contributor at BookBub, and a lifelong romance fan. Find her on Twitter at @kristinawright or Bookshop, where she features other book recommendations.