Reveling in the Arcane 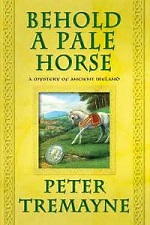 There are a lot of good reasons to read series novels. The characters grow fuller over time. There is usually a good sense of place or era.

But another lure of these novels is more enigmatic. A successful series can initiate the reader into arcane mysteries that are fascinating and addictive.

Case in point: The Sister Fidelma mysteries. Peter Tremayne, who in real life is Peter Beresford Ellis, has used his background in Celtic studies to pen the 27 novels and two collections of stories featuring Fidelma, a 7th-century sleuth, mostly in Ireland.

For starters, Sister Fidelma has nothing in common with the nuns or the abbey that Maria von Trapp fled in “The Sound of Music.” It turns out, monasteries in the Irish church — which was relatively autonomous until Rome tightened its grip on all Christian churches — were coed, and the nuns did in fact marry and raise families.

Tremayne studiously avoids the word “nun” in describing Fidelma, referring to her instead as a religieuse (and monks are religieux). It emerges in the course of the series that Fidelma is a religieuse largely because that was the primary way for women in that era to get an education and act as equals.

Most of us think of the 7th century as the Dark Ages, but Tremayne describes the Celtic world as one of enlightenment. Fidelma is not only a religieuse, she is also a dalaigh, a kind of lawyer, admitted to argue before Ireland’s highest courts.

It is the world that Thomas Cahill described in How the Irish Saved Civilization, for it was precisely these Irish monks who re-civilized and re-Christianized Western Europe after the Germanic tribes conquered Rome, ushering in those Dark Ages.

In its reliance on the arcane practices and teachings of this culture, the series bears comparison to Umberto Eco’s The Name of the Rose. Eco, who was a leading scholar in semiotics, relishes the arcane in his portrait of medieval life. The other obvious comparison is to the Brother Cadfael mysteries by Ellis Peters (Edith Pargeter in real life — don’t let the repetition of the name Ellis or Peter confuse you).

That series, made famous in the British TV series starring Derek Jacobi, is set in western England on the Welsh border and takes place in the 12th century. It is also replete with arcane details about medieval life. Arcane and authentic — this is the key. Both Tremayne and Peters are authoritative in their descriptions of these far-gone times.

Celtic history is the very essence of arcane, but you don’t have to go back centuries to enter a world that is foreign and exotic in its esoteric detail.

Take the Joe Pickett series by C.J. Box. These novels, now numbering 17, relate the adventures of a game warden in Wyoming. They are chockablock with details about horses, canyons, wildlife, deserts, and, above all, guns. Calibers, bullets, range, impact — it’s all there.

And Dan Brown, of course, with his fictional “symbologist” Robert Langdon, owes his meteoric literary career to arcane puzzles and codes decipherable only by Langdon.

Standalone novels can also revel in the arcane, but it is in a series that the fascination of these unusual facts reaches its full scope, helping to sustain the series through almost limitless iterations.