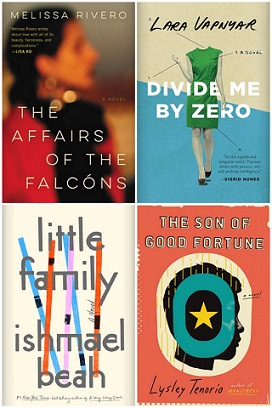 Some really good novels written by immigrants have come out recently. I’m drawn to these writers, being an immigrant myself. I’ve also spent many years living overseas with my U.S. Foreign Service husband. One of my kids once remarked that when people ask where he comes from, it seems strange not to be able to give a straight answer. But cross-cultural identity is fundamental to the American experience, so I thought I’d look back on my reading and share some immigrant-authored novels.

First, I’ll give a shout-out to Lysley Tenorio. The Son of Good Fortune won the 2020 New American Voices Award from Fall for the Book and the Institute for Immigration Research. Funny, quirky, and at times exhilarating, it concerns Maxina, a former martial artist in B-list movies, and her son, Excel. Since moving to San Francisco, life has been tough. Maxina scrapes together a living by scamming men on internet dating sites. Excel, “like the spreadsheet,” was born on an airplane between the Philippines and the U.S.

Because they’re undocumented, they live under the radar. Excel takes humiliating, low-paying jobs, like dressing as Sleuth the Sloth at a spy-themed pizza parlor. The costume practically suffocates him, and it’s an apt metaphor. When he thinks about the college where he once (dangerously) distinguished himself, he wonders what might have happened had he “done the absolute minimum, accomplished just enough to pass? What better way to hide than to be perfectly invisibly average?”

Excel briefly spreads his wings when he joins a girlfriend at a desert encampment called Hello City. But dreams of home, family, and community soon evaporate. His greatest success comes only when he pretends to be somebody else. “One of the perks of being born neither in America nor the Philippines,” he reflects, is that “the only history he needed to know was his own.”

In Little Family by Ishmael Beah, history is “where they give intelligent minds the false idea of hope instead of cultivating the cunning and maliciousness that are needed to survive here.” The book, a finalist for the 2020 New American Voices Award, is about a community of street urchins in an unnamed African country who live on an abandoned airplane. Their home is a relic from their country’s corrupt past. “Almost everything in this country is on the way to losing itself,” one character observes.

As in The Son of Good Fortune, freedom comes with invisibility here. The children scatter in the marketplace but operate undetected as a unit, stealing (or “corrupting,” as they call it) food, clothing, and cellphones. They communicate in coded whistles and sometimes work for con man William Handkerchief.

Khoudi, who breaks away from this world periodically, is a particularly charming character. In a stolen dress and new hairstyle, she explores the other side of the economic divide. But although “what you wore had a way of absolving you from suspicion,” her beauty makes her conspicuous and vulnerable. Only when she puts on rags is she invisible and free.

The most moving passages are Khoudi’s private moments as she bathes in the mangroves and envisions “a life in which nothing constrained her from doing and being what she wanted.” Here, the writing stretches out with a dreamy African flavor. But the rich are not enviable in this novel. They are steeped in corruption and robbed of national identity. Their conversation is artificial and embarrassing. Frederick Cardew Boston is Khoudi’s “young African friend with the heavy colonial burden” of eating tasteless, overpriced European food.

For Beah, food represents a deep connection to heritage, as it does for Melissa Rivero in The Affairs of the Falcóns. Rivero’s novel, which won the 2019 New American Voices Award, begins in Peru on Ana’s 12th birthday, when she kills her first chicken. “You’re going to have to do things like this in life, Ana,” her mother tells her. “Sacrifice is a part of life…God knows I don’t want you running around here for the rest of your life, like this bird…I need you to fly.”

Ana flies to the United States with her husband and children to escape the terrorism in Peru, and her sacrifice is endless. Her well-educated husband, Lucho, can find work only as a driver. The family must share a cousin’s apartment before moving to another, more dangerous neighborhood. Ana does factory work, borrows from a loan shark, and even trades sexual favors to keep her family afloat.

Finally, one of my favorite books last year was Lara Vapnyar’s Divide Me by Zero, a New York Times Book Review Editors’ Choice. According to this novel, love can be better understood by studying math. When Katya’s mother dies, leaving a stack of flashcards intended as an outline for a mathematical textbook, Katya uses them as a self-help guide, "to sort out the mess I made of my life."

Vapnyar’s exploration of Russian immigrant life is thus simultaneously an exploration of lost love, rediscovered love, and love with the power to destroy you. She also has a lot to say about displacement.

"Remember how we couldn't decide if we should bring our down pillow with us," Katya's mother asks at one point. She can’t speak English or find work for which she is qualified. Instead, she sits on the sofa with a cup of tea and a closed Russian book on her lap. Katya reflects:

"I remembered. Some people had told us to leave it, but others had insisted that they didn't have good down pillows in the U.S. and they were worth their weight in gold. Eventually, we decided to ship it. We were shipping tons of books anyway. All the Russian classics, all the math textbooks. Spent a fortune on postage. The pillow arrived safely but it turned out to be too big for the American pillowcases, and anyway, it was lumpy and fat and uncomfortable. We stuffed it in the back of our closet in Brooklyn and it never saw the light of day again. 'I felt like that pillow,' my mother said."

How many immigrants have felt like that pillow! And yet for all the losses and humiliations in this deeply compelling novel, Katya emerges strong, accomplished and triumphant.

Each of these four novels is distinct. But each delivers in a different way the richness and complexity of cross-cultural identity as memorable characters struggle against the constraints in their lives.