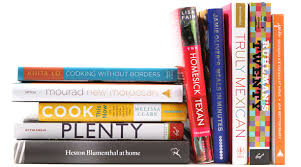 When hundreds of avid book fans crammed into the Sixth & I Historic Synagogue one evening in October, it wasn’t to see Hunger Games author Suzanne Collins or First Lady Michelle Obama touting a new gardening book. No, the sold-out event, co-sponsored by Politics and Prose, was for chef and cookbook author Yotam Ottolenghi and his co-restaurateur and co-author, Sami Tamimi.

Cookbook authors? Yes, in the age of Top Chef, even a chef-writer can have a rock-star following, and Ottolenghi and Tamimi — a Jew and a Palestinian, both from Jerusalem — entertained the standing-room-only crowd with stories about garlic and lemon and running a growing number of restaurants in London.

The authors were touting their cookbook Jerusalem: A Cookbook” target=“_blank”>Jerusalem, but was published only recently in the U.S. In both their books and restaurants, the two chefs present a fresh take on Mediterranean cuisine, using not only garlic and lemons, but spices and herbs and a simple selection of fresh fish, meats, and vegetables.

Most everyone at the event bought the new cookbook, but just how many actually went home and cooked up a storm is uncertain. I know of more than one case of a fan who prefers to curl up in an armchair and read the Ottolenghi books.

This may, at one time, have seemed about as likely as reading your car’s user’s manual for the sheer pleasure of it. Classic cookbook writers like Julia Child and Marcella Hazan may have had an interesting headnote or told an amusing anecdote in passing, but their books were crammed with recipes and instructions so you could put a meal on the table.

No doubt to set them apart from the searchable recipes-on-demand available on the Internet, cookbooks today are lavishly illustrated and text-heavy and contain a lot more than recipes. They are personal histories, travel guides, food encyclopedias, gardening primers, and photographic extravaganzas. The scope and extravagance of the new generation of cookbooks has turned them almost into a separate literary genre.

The cookbooks of Anne Willan and Patricia Wells, for instance, are as much about their lifestyles in France as about cooking in your home kitchen. Which is fine. It can be nice to kick back in front of the fire, read about the lovely food at a chateau in Burgundy, and then order a pizza for dinner.

Or suppose you like the food at a Thai restaurant and want to learn more. The River Cottage Meat Book” target=“_blank”>The River Cottage Meat Book provides a whole philosophy about killing and eating animals and puts its meat recipes in the context of the author’s own farm. Similarly, Nigel Slater talks about growing fruits and vegetables as much as cooking them in Tender: A Cook and His Vegetable Patch” target=“_blank”>Tender.

You can use any of these books and dozens more like them just to mine recipes. But the text enriches your appreciation for the food you’re putting on the table, and it’s worthwhile spending some time outside the kitchen perusing these words of wisdom.

Darrell Delamaide, a journalist and author in Washington, DC, writes a food blog, You Are What You Eat, and a book blog, Cogito Ergo Sum.

From Page to Screen…and Back

The joy of bingeing book-inspired TV in the time of corona.