A tradition beyond words in House Made of Dawn. 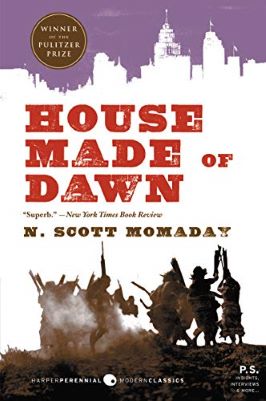 In 1968, N. Scott Momaday, Kiowa poet and university professor, published his first novel, House Made of Dawn. The book’s title comes from the opening line of the Diné (Navajo) Night Chant, a late-autumn ceremony that is ritually intricate and rigorous. Within a year of the book’s publication, Momaday’s work had garnered critical praise and a Pulitzer Prize.

The central character of the story is Abel, a young man from the Pueblo of Jemez (pronounced hey-miss) in New Mexico. At the outset of the story, Abel returns to Jemez after serving in WWII, reeling from both shellshock and cultural dislocation. He is so intoxicated upon arrival that he does not recognize his own grandfather, Francisco. Abel spends his first few days home in a haze, walking the land and chopping wood for a non-native woman named Angela St. John, who is staying near Jemez to use its mineral baths.

What I have written above about Abel, his grandfather, and Angela is accurate but not faithful. My summary conveys one thread of the story — a flattened version easily absorbed in this secondhand mode — that fails to communicate its core, which is the feeling at the opening of House Made of Dawn.

Written language lends itself both to expansion and reduction. In the case of the latter, the limits of words in expressing sensation and instinct, memory and perception, can make linear what was dimensional and simultaneous. So let me begin again:

Abel is running. He is smeared with ceremonial ash. In the cold morning before the dawn, he is running on a wagon road. He is running for, and with, his grandfather’s spirit.

Is this the beginning of the story or the end? It is both.

And we are grounded in the landscape of the Southwest: the fields and the valleys, the mesas and the canyons, the shrill clap of the mountains that hold it all up. Here, in this sacred space, we can almost feel the coveted brush of feathers from blue and yellow birds.

And it is 1945. The first character we meet is Abel’s grandfather. Francisco is a shepherd and a corn farmer, a lifelong Roman Catholic, and a traditional Jemez elder. Neither the contradictions of his roles nor the hardship of his survival cause him mental anguish. He accepts what comes his way and stores all his hurts and disappointments in a damaged leg, though his disability does not keep him from hard work. On July 20, 1945, Francisco drives his wagon to meet Abel, who is coming home from the war. When Abel gets off the bus, he is drunk and falls against his grandfather, who can barely hold him up.

Tears of shame and sadness spring to the old man’s eyes, but he is okay. Francisco is okay because this darkness is a passing moment, one among many that make up days, weeks, months, and years. Alive and concurrent in Francisco is the Race for Good Hunting, which happened a long time ago, when he was a young man and ran at dawn to beat his friend and competitor, Mariano.

There was also Francisco’s first bear hunt, when he sensed the bear as kin, and much later, the year he (secretly) became an artist. Francisco will be dead in six-and-a-half years, and this, too, is with him. So is his love for singing little tunes which linger in his mind and give a soundtrack to the memory of that glorious dawn run, always present and vibrant in him.

Abel, therefore, is and is not the central character of the story. Instead, he is a character situated within a constellation of other characters, and the novel follows him largely in relation to them.

The first of four sections in House Made of Dawn renders a 12-day period in the lives of Abel and Francisco, of Father Olguin (the parish priest for Jemez — an outsider from Mexico), and Angela St. John, also an outsider and a white woman.

Readers follow beatific and grueling passages about the landscape and learn of Abel’s history through seemingly random slashes of memory. These passages are filled with painful wonder: the absent Navajo father Abel never knew; the last time eating his mother’s oven bread and rabbit stew before she dies; hunting for geese under the moon with his elder brother before he dies; an older woman (fat Josie) who comforted Abel in his grief.

Father Olguin, like Abel, is also living with the past in the form of a diary he’s found. It belonged to the parish priest who served 70 years earlier and knew Francisco when he was a little boy. The diary holds great significance for Father Olguin, and we find him reading it over and over, anchoring himself to it as if it were his Bible. However, when Angela comes to town, he becomes unmoored by his attraction to her.

Angela, for her part, is going through an awakening that has her increasingly hypnotized by the landscape of the canyon. Soon after Abel begins working for her, an awkward triad of yearning develops between her, Father Olguin, and Abel. The desire among these characters works on its own to hold the reader’s interest, while at the same time both paying tribute to and criticizing the outside cultures (Mexican and American) that try to control Jemez.

But this storyline comes to a sudden halt after Abel stabs a man to death at the height of the Jemez summer festival. From here, the narrative spins off in a new direction, more than six years in the future. The next three sections follow Abel — again, largely through the thoughts of others — after his release from prison.

The second section takes place in the Los Angeles of 1952. Now we’re in the perspective of an urban Kiowa preacher named John Big Bluff Tosamah, who gives teachings and presides over ceremonies for urban Native people. John Big Bluff’s talk on “The Word,” delivered to his congregation (and readers) in monologue, is a treatise on cultural differences between Native and European Americans.

John Big Bluff’s argument that European cultures and their descendants rely too heavily on words to the detriment of truth through experience is perhaps itself a commentary on Momaday’s challenges and triumphs in bringing Native cultures to the page. To write about traditional life and worldviews this way, in English no less, is to risk spinning off into that which sounds postmodern or speculative — movements that are at heart rooted in European anxieties, not in Indigenous practices.

As John Big Bluff tells congregants at the Pan Indian Church, his Kiowa forebears did not have written language. Spoken words, on the other hand, were sacred and therefore uttered with great care. Silence, for his ancestors, was an important part of communication, as essential to learning and understanding as words.

Momaday offers this secret register via the subconscious quicksilver of poetry. The book, in many ways, is a long poem, braided together with monologues and bled through with Abel’s powerful, nonchronological memories. Creation stories and myths make the medicine stronger by appearing in the novel as if spoken. John Big Bluff’s retelling of the “Tai-me” legend, as taught to him by his grandmother, appears as an oral narrative embedded within a chapter already rendered in dialogue. The effect is that readers hear John’s voice in one ear, his grandmother’s in the other — two voices and two timelines at once.

Please share your thoughts on House Made of Dawn in the comments below. You can join Dorothy in next reading Lady Chatterley’s Lover, which will be the subject of her column on April 17th.