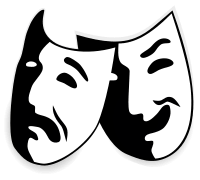 Whether in the intimacy of a black box or the grandeur of an opera house, there is a certain majesty live theater retains even in its modern context. Like poetry, the art form is ancient, which means it has had a long time to evolve, sometimes rapidly, and is infused with an excess of nostalgia.

Perhaps it is nostalgia that makes theater arts a home for misfits and nerds, the ambitious and the reclusive, the energetic and the contemplative. But I like to think it’s the grandeur and mystery of how a few lines on a page become a full and vibrant spectacle that can instruct, entertain, challenge, and invigorate an audience.

Theater and acting were important to my development as a poet in ways I am still discovering as I attempt to find a publisher for my manuscript, The Understudy’s Handbook. I often reflect on that moment when one leaves a theater after seeing a well-done show.

Maybe you’ve seen something so life-affirming and vivacious that you can’t stop talking about it with friends and humming its tunes on the way back home. Or maybe you’ve seen a show so insightful and human that you’re brought to a nearly holy silence. What is there to say, after all, when you’ve witnessed Viola Davis as Rose in August Wilson’s “Fences” tell her adulterous husband, “You take and you take and you don’t even know who’s giving.”

Those moments exist when a reader leaves the small stage of the poem, as well. Poems are first and foremost experiential, bodily, and immersive in a way that is analogous to live theater. This is true whether the reader is reading alone under the proscenium of one’s consciousness, or is listening to a poet read aloud.

Anyone who’s been through a six-to-eight-week rehearsal process, striving to imagine new ways to embody a character, or sing a note with verve and honesty, or wrestle with the complexities of an author’s dialogue, understands the gut-wrenching and miraculous process that a poet enters when doing revision.

Likewise, the actor might recognize that, at a certain point, the performance is what it is. The time for tweaking is over. The lights must come up. The poems get sent out. The art has its life in the world. All you can do is prepare.

Recently, watching and listening to Jonathan Larson’s “Rent” again after many years, I was confronted by how studying theater in high school and college prepared me for navigating the life of a poet. Here are some ways that the stage continues to “light the candle” for me:

Acting taught me about the relationship between words and the body. The methods of making a phrase, a joke, a line come alive in the imagination of an audience watching a play requires the body — from the vocal chords down to the balls of the feet — to participate. The elements of how loud, and where on stage, and at what pace, and in what position, and through which gesture all have to align. That unity mirrors the communal practice of mounting a production of a play. Everyone has to do their role well, and no one can do it alone. In other words, how do you enact synthesis and still remain authentic to language? The construction of poems is similar, but all the rehearsal happens in the mind and the heart. The body is equally involved, though. I think of Seamus Heaney saying that quatrains are for respiration: two lines in, two lines out. Konstantin Stanislavski could have spoken those same words. Poems and plays live in the body.

Acting taught me how to negotiate feedback. I remember being in a production of “The Boys Next Door” in high school. Most of the characters have a range of mental disabilities, and during one rehearsal, none of the actors were performing well. The directors stopped us mid-scene, had everyone sit on the apron of the stage, and gently told us, “That was awful.” We already knew this, of course, but none of us knew what to do about it. Because the instruments in acting are the body and the mind, it felt like that feedback was directed at the totality of a person.

But it’s what happened next that was important. As a group and one by one, we said two things we wanted to try in order to see if the performance would improve, and then we did the same scenes again. We had no idea if what we suggested would work, but we were willing to try almost immediately after being admonished.

I learned that feedback is less about whether I agree or disagree with a comment, or if the giver of feedback has some preternatural ability to “read” what’s really going on, and more about practicing patience and contemplation, and trying again quickly. After all, the poet has the same instruments as the actor: the body and the mind.

Acting taught me the value of improvisation and remaining open to the unexpected. Acting is reacting. Most folks have heard that maxim before, and I found it to be true when I was still performing. Being open to the subtle or grand ways in which a live performance can change is vital to making a performance vibrant to an audience.

I say vibrant rather than believable, because not every experience of art is mimetic or concerned with one’s methods of belief. It’s sort of like the way an epiphany works. Though we understand epiphany to mean “a moment of insight,” its roots in Greek mean something closer to “the gods appearing.” When the gods appear, they are unconcerned with systems of belief.

Before a poem can create an epiphany for a reader, the poet must be open to “the gods showing up” in unexpected ways, and must be flexible enough to react in that moment of inspiration or insight.

Why poets and writers should tune in more often.