Professor Plum, in the Library, with the Rope

The unusual allure of academic mysteries 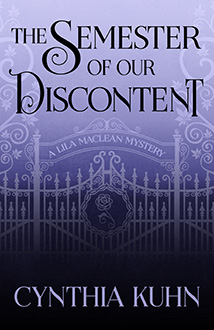 Having finished my spring semester teaching at George Mason University, I was excited about diving into some books that I wanted to read — solely for myself! One of the top books on my TBR pile was my friend Cynthia Kuhn’s debut novel, The Semester of Our Discontent. Kuhn is a professor of English at Metropolitan State University of Denver, and her novel is about Lila MacLean, a new tenure-track English professor at (fictional) Stonedale University. In the midst of a busy semester, Lila stumbles across the corpse of another professor — one with whom she’s had an academic difference of opinion — and…

And suddenly, having finished up my own school year, I find myself immersed once more in the world of lesson prep and grading and department politics and sometimes-heated scholarly discussions and…wait! What happened to summer break?

There’s likely the seeds for a provocative column here on how we choose what we read: Is reading generally escapist or not? Despite that old adage “write what you know,” do we readers want to read what we already know? What are the pleasures — and pains — of seeing the mirror held up to our own lives and jobs and routines? Why do so many people leave the office to come home and watch “The Office”?

Good questions, I’d argue, but I want to focus instead the allure of academic mysteries. Schools in general offer ripe settings for fiction (Harry Potter, anyone?), but the match between mysteries and the academic milieu seems a particularly good fit.

First up are some clear connections between the professor and the traditional detective figure. After all, what qualities could be better suited for detecting than close reading, critical thinking, and a breadth of knowledge?

Even back to the beginnings of the genre, Poe’s “Murders in the Rue Morgue,” the detective was established as a reader first and foremost — the solution hinges in part the literal “reading” of clues — and soon after, Sherlock’s own research and even scholarship were often key to his sleuthing success.

The modern university setting proves equally appropriate, echoing with the best aspects of even older-school traditional mysteries: the closed-setting of the campus on equal footing with the country estate or the quaint village where nothing is as tranquil as it seems.

In The Semester of Our Discontent, Kuhn gestures toward the idyllic setting but also digs into the potential for faculty tensions and turmoil: skirmishes between professors sticking to the canon versus those celebrating more diverse voices; the ongoing debate about the literary value (or lack of value) of genre writing; gender battles; a publish-or-perish mindset — who knew department meetings could be so treacherous, so cutthroat, so…murderous? Setting isn’t simply backdrop here and in other academic mysteries; it informs the characters, their motives, the plot, and more.

“Adjuncts Anonymous,” a story in the new collection Her Infinite Variety by B.K. Stevens, another writer friend, delves just as fully into the bitterness of departmental politics; in this case, the characters walk an uncertain line between being detectives and criminals.

Considering ways to augment their paltry salaries — and indulge some animosity toward another professor who’s swimming in success — the title adjuncts concoct a plan that will both embarrass their colleague and sent a windfall their way. It’s theoretical, purely therapy, the narrator stresses, until one of them seems to begin implementing the plan — but who? And when suspicions fall on one adjunct, can they sleuth out the truth to defend her? Stevens is a master of the twist, and this story includes a couple of nice ones.

In a similar vein, check out Ellen Herbert’s delightful story “To Adjuncts Everywhere” in Chesapeake Crimes: This Job Is Murder (disclosure: the collection features one of my own stories as well). Herbert taught briefly at George Mason and set her story at a “George Henry University” that looks an awful lot like my own campus (except for the, um, zombie faculty). It’s a delightful spoof and a thrilling revenge tale, making good use of tenure vs. term vs. adjunct distinctions and difficulties.

(Given the direction this is taking, I should stress that I’ve been treated very well in my own academic digs. Hi, Department Chair Shutika and Dean Boehm-Davis, if you’re reading this!)

Academic mysteries are such a popular subgenre that you can find 547 of them (as I’m writing this) listed on the Goodreads shelf for “Popular Academic Mysteries,” and many more are linked through the “Academics” section of the website Stop, You’re Killing Me!

Just scanning that list reminds me of some often-iconic characters — Sarah Caudwell’s Hilary Tamar, Edmund Crispin’s Gervase Fen, Jacques Futrelle’s the Thinking Machine — and to the works of current-day writers, too, including my good friend Sarah Shaber’s Simon Shaw novels. (That same list also chides me that I’ve never read the Kate Fansler novels by Amanda Cross, who may well be the queen of the academic mystery. More for my own TBR list.)

Beyond series characters who are academics themselves, many mysteries have used universities as settings to great effect. My own favorite would be Dorothy L. Sayers’ Gaudy Night, inarguably one of the greatest crime novels ever. And then I think of Colin Dexter’s characters Inspector Morse and Inspector Lewis, whose relationships to Oxford are central to their relationship to one another and to the crimes under investigation, too.

What academic mysteries are favorites of readers here? And what other settings lend themselves so fully and appropriately to the mystery genre? I’ve got summer ahead now; I’m looking for suggestions myself.

Art Taylor is the author of On the Road with Del & Louise: A Novel in Stories, which won this year’s Agatha Award for Best First Novel and is currently a finalist for the Anthony Award in the same category.

A Story a Day

A look at an innovative project celebrating an under-appreciated form

7 Reasons You Should Marry a Fellow Writer

Why scribes belong together