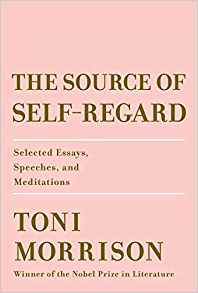 Tell me, what is the source of your self-regard?

I have been exploring answers to this question for weeks — ever since I began reading Toni Morrison’s new pink and gold book of essays, The Source of Self-Regard. Morrison has taken me down a path of fundamental enquiry.

Thus, I have lately become that person who accosts unsuspecting parents on the playground to ask them, “What is the source of your self-regard?” If the art of conversation is dead, and we want to shock it back to life, this may or may not be a perfect question.

Its answers dwell in the boundary lines between where casual conversation and private thought meet. The more time you spend thinking about self-regard, the more confused you may become about your place in the world and what you have taken for granted.

It may even make you uncomfortable. Self-regard is deeply personal, not just because it touches on self-esteem and self-worth, but because it is referenced by all the relations you have (or don’t have) and the society you live in.

Morrison’s title essay is an arc for her own writing. She shows the contrast between the age of Beloved (slavery, Reconstruction) and the age of modernity (the setting of her novel Jazz) as African Americans find increasing sources of self-regard, of voice and agency, through their music:

“I’m really looking at self-regard in both racial and gendered terms, and how that self-regard evolves or is distorted or flourishes or collapses, and under what circumstances. In Beloved, I was interested in what contributed more significantly to a slave woman’s self-regard. What was her self-esteem?…it was her identity as a mother…”

Having read the essay a couple of times, I broached the question casually with five friends. We were a hotchpotch of movement on the schoolyard waiting for our children, who were at soccer practice.

Initially, three women and one man responded to the question flippantly. Each, reflexively self-deprecating, said, “I have none.”

Dropping that question onto the green, plastic turf, I was potentially putting folks on the defensive. “Self-regard” is a loaded term. The Oxford dictionary offers synonyms that include narcissism, self-interest, and egocentricity.

Then one of the four, an academic and scientist, reconsidered and said, “Prizes.” Which was appropriate and honest. Prizes mean something about ability, hard work, recognition, prowess, status. Self-regard is your relationship with the world and whether you are appreciated, whether you are heard.

Morrison, as we know, won the Nobel Prize for Literature. Her 1993 acceptance speech is an allegory about language, power, and humanism; about the conversation between old and young as we ask indecipherable questions and how, together, we can find answers in a new language.

I asked the man in my “lucky five” if the source of his self-regard stemmed from being a stay-at-home dad (he is the husband of the scientist), and he said, no, “I have none.” Yet he went to a premier university. Perhaps self-regard “collapses” (see Morrison, above) or is no longer the right question?

He pondered the question that night, though, and came back with his answer:

“[I think I have] the luxury to bracket something like this off; hold certain ideas at arm’s length — they are sort of there, but I don’t internalize them. Otherwise, it seems it would be a bit egotistical. It needs to be close enough, like a binary star, to get energy from it, but you don’t want to be sucked into it.”

During the initial interrogation, two other women looked appropriately bewildered by my forwardness and said it would never occur to them to say their self-regard came from being a mother or that its source could be her work.

Morrison says, “You could get slaves to do anything at all, bear anything, if you gave them any hope that they could keep their children…everything they did was to maintain their families.”

Slavery’s playbook was the separation of children from their families and, suffice it to say, in 2019, there are many instances of such separation, some hitting closer to home than we may be willing to disclose.

On deeper reflection for our crew, it could sound a bit pompous (or perceived as non-feminist) if someone had said, “Being a mother is the source of my self-regard,” even if it was.

And if a father had said that, does it sound less self-important? In our age, there are multiple sources of self-regard and identity, and thank goodness that being a parent is not the only one. But, if it were, could that be okay, too?

My fifth friend, a psychotherapist, tried to answer in the five minutes she was standing with us at a water break while she was coaching soccer. She talked about epigenetics, historical trauma, ancestry, and stories — what she has inherited as a woman and what she would pass on to her daughters.

These ideas really resonated with me, especially in the context of Morrison’s essay. I felt like I was looking at my friend at a cellular level and it was profound.

The definition of “self-regard” is regard for, or consideration of, oneself or one's own interests. It suggests empowerment and selfishness both. It suggests placing boundaries to get your own work done; professionalism; engagement; agency.

Self-regard is not passive, so the lack of it is potentially disempowering. Yet, in a Buddhist sense, if you were to give up ego, is self-regard to be dismantled? In that case, it could be not disempowering at all to set it aside, but instead liberating, no?

It all depends on your sense of power and choice. Morrison shows that, once you come to have status in society, can choose who you love, and have greater imaginative and interior freedom, the sources of self-regard grow:

“It may be through that agency, and the even more powerful assertiveness of what we call ‘jazz,’ which uses those gestures, that compromise becomes reconciliation. It’s also the way in which imagination fosters real possibilities: you can’t imagine it, you can’t have it. And a third thing grows, where despair may have been…that jazz creates and that creates itself in these spaces and intersections of race and gender that interest me and that informed and propel the writing of this book called Jazz.”

My friends wanted to know my answer to the question. And I said, “My work [as a writer] is the source of my self-regard.” Prizes, as for my scientist friend, are a source, too (even when I know they should not be). Publishing is also a source.

And, thus, I reckon we are tied to recognition of our output.

But, mostly, the being is important to me: being a writer. That I can be, that I can do it, the imperative: I have to be. There is self-regard just in the knowing. And vulnerability in the admitting — for aren’t we rewarded socially if we are self-effacing in our privilege?

For the writer who delves into oppression and violence, there is peril, both personal and political. Morrison says that you are going to create chaos. Oppression isn’t hidden, violence is known. Since you are writing about something familiar yet estranging, you don’t want your reader to turn away.

Neither do you want your reader to be a voyeur. You want to write about oppression but, at the same time, disenfranchise history. For example, Morrison writes, “How do you take the artistic control away from slavery and place it where it belongs…Because the problem is always pornography.”

The sources of self-regard expose both vulnerability and power, and how you imagine you fit into the society you live in. The factors that determine it are probably privilege; race; what we do; how we relate to gender; the pecking order of our birth nation in the hierarchy of nationalities; the era in which we were born; whether we are city or country mice; and if we are following the path we were socialized to follow.

What if you have no passport? No country? What is the source of self-regard for a disenfranchised person? Doesn’t self-regard play a hand in our rage when we feel belittled or unloved, unheard? It lurks, a monster in waiting, tipping the balance of power against us, making us do unspeakable things.

And though I am learning that both the question and the answer are dependent on a number of factors, the question needs to illuminate that we cannot be reduced to the factors, either, for that is a lack of imagination.

If white, if woke, if black, if female, whatever your identity, will inform your answer, but be wary: You are more than the sum of your parts. Imagination allows for freedom of thought to elevate humans out of nature and nurture to great possibility.

These days, we bemoan the lack of conversation, the marriage to our screens. But, as Morrison said in her Nobel speech, what we want “is in [our] hands.” The power is ours — to ask, to listen, to do this together.