But, Tell Me, Where Do the Children Play? 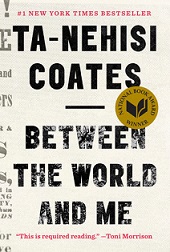 My husband gave me Ta-Nehisi Coates’ Between the World and Me for Christmas last year. When Coates published his piece on mass incarceration in the Atlantic in 2015, it took me a month to finish, to slowly come to grips with his thesis. His style includes careful examination of history to build a strong case for an alternative narrative of what is really going on.

This week, when I began Between the World and Me, I sobbed into my sheets, unable to take my time. Coates is a father speaking to his son. He offers no comfort:

“The Dream smells like peppermint but tastes like strawberry shortcake. And for so long I have wanted to escape the Dream, to fold my country over my head like a blanket. But this has never been an option because the Dream rests on our backs, the bedding made from our bodies…

The book is part letter, part eulogy. How can there be comfort for Coates when his friend Prince Jones, a fellow Howard University student, on his way to visit his fiancée, is stalked by an officer through DC and Maryland and then shot in Northern Virginia for absolutely no reason?

Activist authors like Coates have a societal effect. They raise awareness about historical injustice and its emotional toll. Social justice and the ideals of nationhood were a great source of inspiration for me as a middle school student in Bombay. At my all-girls private school, run by a trust, we belted out spirituals in music class, even if I did not come from a disadvantaged ethnic group.

But there were always the higher ideals, the Dream. That the Dream itself was woven into privilege, not just an act of hope and inspiration, was not a familiar idea to me, and one that I find intellectually riveting.

The violence and the physical toll of stress and exclusion which Coates evokes with his emphasis on “black bodies” is a sacrosanct issue. The closest parallel I can think of is the history of the Dalit body in India. It is not easy to talk about, leave alone write about, without deep discomfiture.

I try sometimes to do it in my poetry and send the poems to editors who I hope will trust my intentions, and they do. But a full understanding of free speech and appropriation, when you come from privilege, is murky at best, and though founded on the intentions of empathy and courage, can be quickly turned against you in an outrage cycle on Twitter.

Thus, I admit cautiously that I feel Coates’ critique of society in the daily lower-stakes struggles that engage me. Recently, the DC Council chair convened the council on a special issue — after-school use of a public field by a private school.

In 2009, the District’s parks and rec agency, DPR, bought three fields for $20 million during the financial crisis from the iconic Boys and Girls Club. Entering into a 10-year partnership with a private school, one of these fields, Jelleff, was renovated by the school for $2.4 million. For their good partnership, the private school has near exclusive use of the field daily after school, transporting its varsity athletes to it from its uptown campus 10 minutes away.

Some made the argument that the city was too poor during the financial crisis to refurbish its own field. But, at the same time, hundreds of millions of dollars went into updating DC schools and playgrounds. The District has the third-highest per-pupil spending in the United States, almost $20,000 per student.

Earlier this year, public school parents and neighborhood supporters asked that the 10-year lease not be renewed for an additional nine years until 2028. However, in spite of public dialogue, the lease was renewed with no explanation given and no 30-day stipulated notice provided by DPR.

The two institutions that neighbor the field are left out of what DPR calls a “win-win” deal. The Jelleff after-care program run by the city on the same grounds is not able to use the field, and the children remain indoors. The middle school across the road needs regulation fields to host home games but must travel elsewhere to host them.

One parent from the Jelleff after-care program, who couldn’t wait with me until so late at night to testify because he had to go cook dinner for his girls, had told me how he moved from Southeast DC, from a blighted school, to our neighborhood to give his daughters an opportunity for a safer learning environment. Now he was battling his middle school daughter, who disliked the stuffy indoor environment in the Jelleff after-care facility. On hot summer days, she preferred waiting on the road for him to fetch her after work.

My daughter’s middle school, across the street, could not use the field, either, and kids traveled — at considerable cost to the school — to play home games wherever they could. This middle school student body is fast changing from an out-of-boundary one to an in-boundary one, but before this change, I recalled at a dinner, one of the minority in-boundary kids biked home to Cathedral Avenue from RFK Stadium because his soccer game was held there. (His nine-mile, uphill commute took one hour; Jelleff field is a mile from his home.)

This is similar to the commute that many out-of-boundary kids take from across the city; some wake up at 6 a.m. and have three transfers to the school. It was one of the reasons why I was drawn to the school — I wanted my kid to be around kids who worked that hard to be at school; their families are role models for me.

So, when finally consulted this summer, the changing public school community that was determinedly packing halls with in-boundary students like my daughter said No, we want access, too, and they were ignored.

The council hearing began in a majestic room of the Wilson Building, a little smaller than the size of our middle school field, with only standing space. The private school that used the field packed three-quarters of the docket. Testimony was strong from the councilman from Ward 2 who brokered the original deal, and whose son went to the same private school under question.

The multi-ethnic alumni of this private school argued this was not about race and privilege. They testified to the character of this ethical, community-oriented institution that was not just part of the community but had 40 percent diversity, sports scholarships, merit aid, and financial aid. The school has a great reputation, and I have friends who attended it. Like my own private school in Bombay, it inspires loyalty, as it should.

When he reflects on the way things are and how they came to be, Coates says:

“It does not matter that the intentions of individual educators were noble…Forget about intentions. The point of this language of intention and personal responsibility is broad exoneration. Mistakes were made…We tried our best. Good intention is a hall pass through history.”

I acknowledge again that the context of this exoneration is vastly different, but I kept wondering if the principles still apply.

My research is not as meticulous as that of Coates. But I think this is actually also a situation about privilege. Coates has made a case for the expansive and explosive indictment of white privilege. In my case, I see an easily parodied prolix battle of two privileged classes. And yet I still came away feeling the resonance of good intentions failing to fully account for history.

I think I want kids from the public school and the after-school program to have the same opportunities as the kids from the private school, or at the very least the same access to the same public field. My daughter’s middle school is at least half black, and I want it to stay that way; I want it to reflect this city, which is half black.

I don’t want a Jelleff kid high-fiving his private school counterpart on the baseball field without feeling lucky, too, that he has the same opportunities to play in the World Series, or at least could go to a game (last I checked, tickets start at $631). I feel guilty at admitting that I want this when this want is contrasted to the noble wants of Coates: liberty and justice for all, truly.

But, in truth, I fear that the system is stacked against our school, a Title 1 Targeted Assistance school. No matter the good intentions of one private school, there are unintended consequences for a lot of kids.

It is a struggle not to show outrage, because outrage and personal grievance are strong emotions and they make us feel good. We get busy, flitting from outrage to outrage, missing facts, failing to hear the other side. According to NPR’s “Hidden Brain,” Outrage Is Hijacking Our Culture and Our Minds. (Thanks, Susan Laws, for the share!)

But it doesn’t change hearts or minds. It keeps us in silos.

From Coates, I feel like I have a framework to explain an opportunity. He is effective because he encourages his reader to reflect with him and feel with him on justice. Of course, it raises the risk of seeming to conflate generational struggles with personal struggles, mountains with molehills, race with class.

But I assert that I do feel him and that it’s part of the way that reading — reading activists in particular — animates us and moves us to action. I felt the resonance of his argument at this City Council meeting.

And so I admit it and I hope somehow that it is not naïve to think that maybe working out the little problems is part of the progress toward working out the bigger ones. As Coates says: “Because they must ultimately stop themselves. And still I urge you to struggle.”