It’s okay to glance backward while looking ahead. 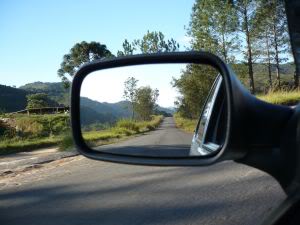 Willa Cather, whose spiritual touch was as light and powerful as frankincense, once said that there was suddenly a moment in her life, one year in particular (1910, I believe), when she ceased to look forward for the content of her writing, and turned instead to the past. Thus she began the most fertile period of her career.

As much as I love Cather for her deep sympathy with all striving, seeking Americans, I’ve long lived in fear of such a thing happening to me. To stop looking ahead would mean to let the world pass me by, and Fingism means living in the present.

But an interesting thing has happened in the last few years (starting in 2010, for me). The world has passed me by without any notice or obvious detriment to the world — or to me.

I knew it when I found myself saying to my children the same things I was saying to my college students: “Discipline is learning how to learn”; “Power works in both directions”; “Pursue your pleasure, to gain the knowledge, to assert your power.”

I couldn’t deny the hoary gravity of these words. At the same time, cellphone and hand-device technology also passed me by, and I found that I didn’t want to be a part of the never-ending wave of hype and declining autonomy.

I found myself thinking: There is so much material in the past! In fact, too much for the anxious writer.

I recently read an examination of the past through lost baseball stadiums in the cities of the East Coast and Midwest called Deadball, by David B. Stinson. In this “metaphysical novel,” we come to know Byron Bennett as he struggles to understand the insolence of his youth — and regret of his adulthood — by seeking out the past in baseball.

I think this is a wonderful way to narrow the view of the past, to not let its immensity overwhelm, and to make the examination more fulfilling.

Cather was a master of focusing on her characters, their interactions with others, the strengths and weakness of their social netting. And she drew them from the reservoir of her past in Nebraska (in My Antonia and O Pioneers), and the past of the land (as in Death Comes for the Archbishop). She also knew that the true magnetizing draw of the past is its spiritual evanescence, the bittersweet chocolate of lost time.

Because the past is real, because it’s irretrievably gone every moment of our lives, it is a source of spiritual wonder and questing.

I’m interested in Siddhartha’s teachings, and one concept I’ve had to cogitate upon for a long time is the notion of “no-self.” Precisely counter to “I think, therefore I am,” no-self says that your thoughts present an illusion of self, one that can’t stand up to examination or the inexorably permanent change of time.

I’ve struggled with this, but fatherhood has helped me see it from a new perspective. Once I had children, the space between my father and myself shrunk considerably, and equally between myself and my grandfather, which also means that I will feel the same if and when my children have children.

The older I get, the more readily can I comprehend what happened before my time. I feel as if the no-self of my great-grandfather has been passed directly to, and through, me. (A corollary: Who says reincarnation has to happen after you die?) And this leads me to an awareness I hate to repeat for its clichéd use. Faulkner was right: The past is never past. I even once had a teacher who said, “The past tense is the present tense.”

But a broad view of the past is careless. Anyone can toss out bromides about the good old days. I’m not talking about nostalgia, but sentiment. Nostalgia sees only through rose-colored glasses. Sentiment acknowledges the emotional devastation of lost time, feels it, and moves forward anyway. Sentiment is the suffering of impermanence and the striving to be happy despite a doomed fate.

The past is like the wide-open plains of Cather’s Nebraska, copper grasses waving and good-hearted people cultivating the land. There is drama in the passing of time. A storyteller has the material he or she needs simply by looking backward.

Y.S. Fing has followed in his father's (D.Selby Fing's) footsteps and is a writer and teacher who seeks to make sense of the nonsense of life, with a philosophy based on irony with love.