A biography that does justice to a complex, confounding figure. 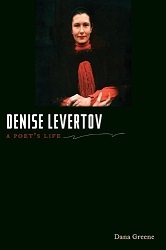 Denise Levertov is remembered as a political poet who believed that poets should be active in the world. She lived this. She was a game-changer when few other women poets were writing about American foreign policy and our country’s internal combustions.

She was among the most prominent voices throughout the 1960s antiwar movements; while a peace activist and demonstrator, her poetry never suffered. Levertov took on the Vietnam War and Iraq War as Mary Wollstonecraft did the French and American revolutions

Levertov exceeds our imagination because she is such a self-created myth. In Denise Levertov: A Poet’s Life, published in 2012, biographer Dana Greene un-layers the poet’s being, showing how every move was structured to build a monument to her own thoughts through poetry. This was a woman who was a poet first (and a mother and wife next) since she only understood the world through what she wrote.

She attempted to apply rational thought to an emotional life, and this made her a meta-thinker and writer, but never at peace with relationships. Dozens of her poems address strategic questions about our society; she converted public issues to prosody. In later life, she turned to religious questions, and her lyricism deepened.

Levertov’s personal life — eros, pathos — was self-absorption as high art. She was also a rolodex of psychological disorders, not your sweet sister. She was arrogant and needed to be adored by men. She was critical yet unable to take criticism: “exacting and inflexible”; “bossy and demanding”; “she lacked sympathy for people.” This biography shows a great talent within a prison of need for approbation.

Sex was one way she found assurance. This may describe any number of poets, but Levertov is significant because, as poet Roland Flint said, “The work is all” she was, and she remains a major figure even today.

Dana Greene proves to us that Levertov’s work is essential in the development of American poetics. Although Levertov was a woman who rationed mercy to people, her poetry is merciful and compassionate.

She struggled with American cadence and her English phraseology.

We can see Levertov as a corrective to the poetry of the 1950s, with its inwardly confessional bent. The Cultural Revolution brought her poetic power to full force. She was a risk-taker and a rule-breaker, but her poetry was classical in form. She had an intellect to match the dynamic of the greatest minds of our time.

Levertov’s stridence is what disturbed the order of her life. Yet the friends she chose for their loyalty were lifelong companions and were with her until her dying moments in 1997. Some she fastened forever: Carolyn Kiser and Lucille Clifton, James Laughlin, Sam Hamill, Robert Creeley, Al Young, Eavan Boland, and Galway Kinnell among them.

It was not her contemporaries’ opinions Levertov sought. She needed to define herself by thinking her way through philosophers and spiritual leaders and then writing of her metamorphosis. She longed for the union promised by God, but lacked the luck of faith. So she tried to think, study, and argue her way to Heaven.

Faith is actually just skipping all the questions, but that was not her way. She was born into a family of Hebrew scholarship and needed liturgical conviction through compelling ideas. She converted to Catholicism in her later years.

As Levertov’s public trajectory put her at the top of poets in the 1960s-1990s, her personal life left a few broken people in its path, including the son who could never be reconciled and some poets who differed from her. I believe her rant against lesbians was to provide a plausible deniability for her very stern stuff.

John Felsteiner said, “She was a unique presence because more than any other poet [sic] since Yeats had everything come together in an organic whole poetry, religion, history and politics, the natural world and people.”

Greene ends the book with this Levertov quote: “Not farewell, not farewell but faring/forth into the grace of transformed/continuance.”

Biography cannot easily summarize this woman, yet Greene seems to distill Levertov’s actions and behavior as a result of original rejection which sought fullness through writing. The purpose of our wounds is to show where the hurt is. And their value? Time is deciding well for Denise Levertov. This biography makes clear the strivings and benefactions of Denise Levertov’s life and work, and we are the better for it.

Grace Cavalieri celebrates 38 years on-air with “The Poet and the Poem” on public radio, now from the Library of Congress. Her new books of poems are The Man Who Got Away and The Mandate of Heaven.