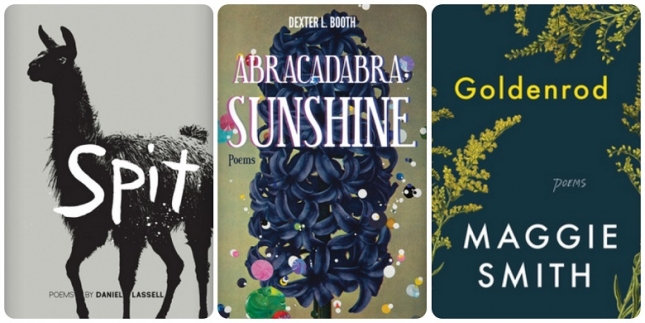 Oftentimes, a theme organically emerges while reading multiple, seemingly disparate books. Poetry tends to lend itself to ruminating on particular concepts, as the mark of any poet worth his/her/their salt is the ability to grasp expansive questions of humanity and its place in the world and distill them into as few words as possible.

A poem or poetry collection may ask much more of its reader than other literary genres precisely because it is important to examine our existence from every angle and to carve out the small spaces that encompass enormous emotions like grief or joy. You can hold the whole world in one poem, and that’s why I often return to Jack Gilbert’s “The Forgotten Dialect of the Heart,” where he writes, “How astonishing it is that language can almost mean,/and frightening that it does not quite.”

The particular collections featured this month unite around the body — human or non-human — both its frailty and strength as living tissue and breath, and always with time and predator pressing down upon it. I invite you, as these poets do, to consider what we associate with the word “body” (noun and verb) and which bodies we can truly possess or inhabit.

In Daniel Lassell’s collection, Spit (Wheelbarrow Books), we are confronted with the fundamental violence to the body that farming entails. The poems’ narrator grew up on a llama farm in Kentucky and captures that small agrarian world which is physical in every sense, from manual labor and its consequences to the inevitable bloody conclusion of most of the animals’ lives, be it by human hands or, as Lord Tennyson described, “Nature, red in tooth and claw.”

In “The Lives of Chickens,” the grim reality of protecting these vital creatures is an ongoing battle. Lassell writes, “a possum gnaws wire into the coop/eats the foot off Dorothy.” And in “Mom Woke to a Coyote Staring in Her Window,” the children tumble into the dark, weaponless, to run off the pack, lest it get past the fence to the llamas. Yet even the llamas present their own danger, as in “Blood Lungs,” where the speaker has been kicked in the chest during a shearing.

Sometimes, however, the most vicious creature can be a child’s compassion as he takes in a stray dog that then brutalizes its way through the area. “Taking in the Stray” is one of Spit’s most chilling and powerful poems:

“You devoured so many sinless creatures. Yet, I still
remember the time you curled beside a fawn to guard it from coyotes.
After you had eaten its mother.”

Yet tenderness is still present between man and animal, as with “How to Pet a Llama,” in which the speaker gives a set of instructions on how to approach and bond with the llama, which “hums — not as if/recalling the tune to a song,/but something longer lost./Call it a lullaby if you like.”

We also come back to the idea of the specific body, in that softer emotion, with “Everywhere the Salt,” about a farmer who brings flowers to his wife’s grave every day for years. This poem is pushed up against a narrative that takes the shape of parents divorcing. Lassell writes:

“A body
in affection loosens.

Does anyone know
the number of years that love

It is this eternal question of love and the body that moves us into Abracadabra, Sunshine (Red Hen Press) by Dexter L. Booth, a collection whose core is wrapped around a failed romantic relationship and its fallout. It begins with a series of poems using the guise of the epistolary form referenced in its very first poem, “First Letter to Natalie,” though Booth diverts into a different call-and-answer pattern by beginning a new sub-poem with the last line of the previous one, creating a connected but separate narrative of the speaker and his possibly ambiguous, unreciprocated romantic interest, such as in “We are not in love, but”:

“We are not in love, but
there exists commitment — that is —
a mix between trust, the middle of a bottle,
and a half-written poem I wrote on a plane.”

The most affecting poems in Booth’s book, however, have to do with physical and mental illnesses and the toll they take on the body. In “Explaining Love,” the second of three poems with the same title, the speaker’s mother cannot physically walk up the stairs or bathe herself.

“Explaining Sadness” delves into a man’s attempt to understand, but also conceal, depression and how it affects so many in the Black community. And “The Lazarus Project” speaks to the unexplainable aspects of our own bodies’ health and the limitations of modern medicine: “How elusive we can be, even to our own/skin — the doctors are playing Marco Polo/with the gene in your mother cannibalizing her/brain.”

This month’s standout book, however, is Maggie Smith’s Goldenrod (Atria). The poems in this collection, set against a backdrop of the white suburban Midwest, ask the deliberately uncomfortable question of whether we are truly residing in our bodies amidst the din of everyday life.

With a majority of its poems comprised of couplets or single stanzas, Goldenrod evokes a tone of moving sameness, as if watching trees blur past through the car window during a morning commute. The speaker in these poems is touched by the darker aspects of larger political issues but is mainly focused on her insular mundaneness, which you sense is a deliberate nod to white privilege, but which also portrays the small, domestic dramas of women that can reverberate so deeply through their lives.

Throughout, Smith is deeply connected to the themes of nature, motherhood, and the concept of home — how these have been separated from each other, causing a sort of disassociation of body and psyche.

In “Slipper,” a woman recalls her last visit to the beach, when she was pregnant and with her other small child. Her daughter finds a slipper shell, and she marvels at what once lived in it: “Imagine if I could/wear my home and call it my body,/wear my body and call it home.”

The poem “Interrogators of Orchids” examines the damage we do when we cultivate our children’s nationalism and separation from the natural world: “We birth/the new citizens — interrogators of orchids,/interrogators of air — and bring them/as far as we can.”

But Goldenrod’s main question — given this disconnection from wonder, the physical world, and our own bodies — is whether we have fundamentally redefined humanity. The poem “Animals,” which is about the government’s child-separation policy, appears early but casts a long shadow across the book and beyond:

“We have been animals all our lives,
with our spines and warm blood, our milky tits
and fine layers of fur. Our live births, too,
if we’re lucky. But what animal wrenches
a screaming baby from its mother?
Do we know anymore what it is to be human?
I’ve stopped knowing what it is to be human.”