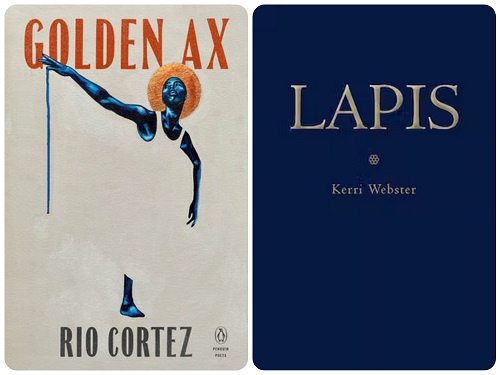 The two collections for August’s roundup absolutely insisted on being together. I selected one as a definite to-review book during late spring. Then, last week at a literary conference, I found myself in a random conversation about two poems that appear in it.

I’d taken a different collection with me to read on my flight and found myself fighting to get through it. Once back home, I returned to another book from the same press as the one I’d been struggling to finish. That’s how I finally gave in and found myself with two collections that begin in the Utah desert and touch on the mystical strangeness of Mormonism from two different poets with very different backgrounds and experiences.

Rio Cortez begins her debut collection, Golden Ax (Penguin Books), with an author’s note that touches on her freed family’s migration west during Reconstruction. They ended up in Utah, where one member converted to Mormonism. The church used his testimony to recruit more Black members despite not allowing Black Mormons to fully participate in the church until 1978.

Cortez, who grew up in Salt Lake City, describes the loneliness of being one of few Black children in her community, but she also reclaims the space for herself and her ancestors, whom she proudly calls “Afropioneers” of “Afrofrontierism,” a nod to Afrofuturism, which she says “seeks to envision a future for Black people at the intersection of imagination and science fiction.”

Cortez, like many other writers from the African diaspora, strives not only to imagine that future but to recreate an ancestral past that has been stolen — due to the erasure of colonization and slavery — while celebrating the known migrations of her family to what was once the ultimate wild, dangerous, and racially romanticized as almost exclusively white frontier: the West.

Golden Ax (its title a nod to an historic Black-run newspaper from Salt Lake City called the Broad Ax, and what I infer is an allusion to the Gold Rush fever that once hit so many western U.S. territories) tells the story of a family of Black pioneers from the 19th century to the present day. It’s about migration, movement, and the need to find a piece of land that can not only be claimed, but that will accept you back.

Unlike European settler-colonials, people of African descent were brought to the Americas unwillingly, and their battles for belonging continue to this day. In “Covered Wagon as Spaceship,” Cortez navigates that tension, especially against the stark landscape of the western deserts, which is vast and foreign to anyone from east of the Mississippi. She writes:

“I consider whether it’s aliens
that brought Black folks to the canyons, valley.
Standing in the great evaporation
of a lake, holy dandelion for
eyes, full and white and searching the landscape
for understanding: how do you come


to be where there are no others”

Cortez also chases the idea of the speaker being haunted by herself or existing as two beings, as if an alien possession left the body with a double consciousness. In “I learn to shoot a bow,” the speaker claims two origins — “In one story I come from a sea god/with the forest as my mother, and in/the other, I have no mother at all” — another nod to people stripped of their motherland and left endlessly searching for someplace new to plant their seeds.

The poet’s sense of otherness takes on multiple layers and references the otherness that many also equate with the Church of Jesus Christ of Latter Day Saints, such as in the epigraph to “Salt,” which quotes Brigham Young (“This is the place!”) next to the experimental composer Sun Ra (“Space is the place”), and also the epigraph to “As Cain,” which states, “Until 1978, Mormons maintained that in a spiritual ‘preexistence,’ Blacks were neutral bystanders when other spirits chose sides during a fight between God and Lucifer. For that failure of courage, they were condemned to become the accursed descendants of Cain.”

In the poem itself, Cortez cuts to the quick with profound, truth-laced dry humor: “First curse, then blessing./God’s always changing his mind about us”

Kerri Webster’s latest collection, Lapis (Wesleyan University Press), also takes on the Mormon Church in the context of personal history, though it is through a feminist lens of mourning. The long-form poem “Seer Stone” makes up much of the book’s first section and references the European folk-magic belief about a stone that can help you see things not visible to the naked eye and that — according to Latter Day Saints theology — was used by Joseph Smith to receive revelations from God.

In the poem, Webster wraps this Mormon myth around the speaker’s mother dying, making the woman’s death and the adult child’s grief at being left behind into a holy pilgrimage shaped by the speaker’s Mormon ancestors and the church’s history of misogyny and erasure of women. Webster writes:

“There is reason to think women in early Mormon history anointed,/healed, cast out, but this is not recorded in the family records, nor are/matriarchal blessings, nor are the women’s conversion narratives.”

She writes a type of poetry that I am quite susceptible to, one that is a bit otherworldly and full of literary and historical bric-a-brac that takes on a magical, profound quality. The desert keeps popping up in both collections, but the reference in this one’s title to lapis lazuli takes me to Ancient Egypt and the goddess of beauty, Isis, whose sacred stone is lapis lazuli, and also to The Egyptian Book of the Dead, the Egyptians’ guide to the afterlife. This makes sense considering much of Lapis is about the poem’s speaker being chased by the dead.

The book’s epigraph includes a recipe for how to make lapis lazuli into ultramarine paint, which was historically used in writing holy texts for the Catholic Church. Webster marries these concepts in poems like “I Go and See a Man About Some Lapis,” in which she writes:

“I say: It’s what I need to get well, to get right/in the head, to get right with my dead. Just a taste./To rub on my gums./To touch their hems.”

Continuing the theme, “The Lapis Nuns and the Radium Girls Meet in the Hereafter” is a spectacular poem that intertwines the recently discovered medieval nuns who painted those manuscripts — identified by female archeologists by the preserved fragments of ultramarine paint in their teeth — and the female factory workers who used radium to paint watch faces, only to contract radiation poisoning and have their teeth fall out. It’s a gruesome but apt pairing, as the women all eat ortolans (a songbird considered a French delicacy) together and bask in their immortal obscurity, Webster’s own dark humor on brilliant display:

“A lapis nun shows the radium girls
a fleck of the Christmother’s hem lodged
in her gums. A radium girl shows the lapis nuns
the hole in her neck where sky leaks through.”

In Braided Memories, Marjorie Agosín pays homage to her great-grandmother, who escaped Nazi-dominated Vienna and made her way to Chile.