…and how to start again. 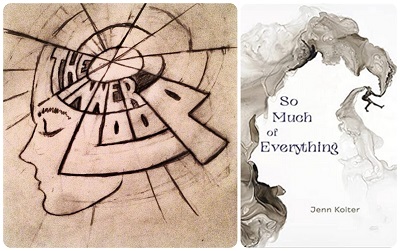 I arrived in the District in 2019 in the grip of a five-year writer’s block. I hadn’t written since finishing my MFA in creative writing, with the exception of a brief spurt of writing brought on by a personal loss. If I’m honest, I was already experiencing resistance and avoidance when I was still in school. But by this point, my writer’s block was entrenched.

I resigned myself to never publishing a book of poems. I still cared about writing, though, and still considered myself a writer. When I first started thinking about where to settle, the possibility of being part of a literary scene did cross my mind. And since I knew that some of the Barrelhouse editing team was based here, particularly poet Dan Brady, I figured the DMV literary community would be solid.

As you’ve probably guessed, I found my way back to writing here in DC. It took a combination of circumstances and tactics. I discovered breathwork and started regularly practicing a form of conscious circular breathing, which I loved so much that I got certified to teach it.

I also decided to try my hand at screenwriting and signed up for Ela Thier’s marvelous screenwriting course. I started writing with people. I started to play again. I fell in love with screenwriting. And, suddenly, even though I hadn’t set out to write poems, they started bubbling up again, too.

So, when my friend Lori Tsang mentioned that she was going to be a featured reader at an open-mic poetry contest hosted by a local arts organization called Day Eight, I decided to throw my hat into the ring — and won the first round.

So, I advanced to the finals two months later — and won that, too.

So, I was awarded the option of publishing my first book with Day Eight — and I said yes.

So, I had one month to pull together my manuscript — and I did.

Many of the poems had never been published, so I did a mad rush of submissions — and published 24 poems in three months.

Then, finally, as an actively writing and publishing poet, I found the confidence I’d lost — and connected with the literary community that I’d suspected was here all along. I’ve been fortunate enough to connect with the lovely humans at the Writer’s Center, the Inner Loop reading series, Riot in Your Throat press, and, of course, my own publisher, Day Eight. It’s been divine.

Since dissolving my own writer’s block has made such a difference in my life, I’ve made it my mission as a writing and creativity coach to help other artists do their work again, too. So, in case any of you are writers who have some measure of avoidance or resistance in your creative work, here are a few tips (and if you’re a reader, we love you! Thank you for making space in your mind for our work!):

Try working in a new genre or form. There is power in being a beginner. Sometimes, working in a genre in which you don’t expect yourself to have expertise is enough to loosen the grip of the perfectionism that keeps you from writing.

Write with someone else. We think of writing as a solitary act, but it doesn’t have to be. Just having another human in the room or on a video call doing their own writing can shift your energy and allow you to write.

Meditate or do breathwork when you first sit down to write. If you’ve been blocked for a while, you might have conditioned yourself to get anxious when you sit down to write. So, before you start working, relax with five minutes of box breathing: Inhale for a count of four, hold for four, exhale for four, and hold for four. Stopping that anxiety before it takes hold can go a long way toward helping you find your creative flow.

These are just a few of the techniques that helped me make my way back to writing. Writing again — and finding the local writing community — shifted the trajectory of my life. I love it here. There’s nowhere else I’d rather be.

[Editor's note: Jenn Koiter will speak at this year's Gaithersburg Book Festival on May 21st in Gaithersburg, MD.]

[Editor’s note, pt. II: This piece is in support of the Inner Loop’s “Author’s Corner,” a monthly campaign that spotlights a DC-area writer and their recently published work from a small to medium-sized publisher. The Inner Loop connects talented local authors to lit lovers in the community through live readings, author interviews, featured book sales at Potter's House, and through Eat.Drink.Read., a collaboration with restaurant partners Pie Shop, Shaw’s Tavern, and Reveler’s Hour to promote the author through special events and menu and takeout inserts.]

Jenn Koiter is a poet, screenwriter, writing and creativity coach, and breathwork guide. Her debut poetry collection is So Much of Everything. You can find her on Twitter and Instagram as @jennkoiter and learn more at jennkoiter.com.

The Raw Power of Ledger