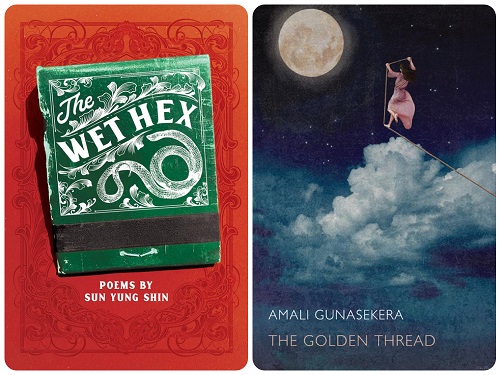 This roundup marks a full calendar year’s passing since I took over as the Independent’s poetry editor, and I greet this anniversary on a full moon, the culmination of the lunar cycle before it begins to wane and start all over again.

It puts me in mind of the power of repetition in both individual poems and collections: The words and images poets find themselves drawn to are both fascinating and powerful. They can shape the entire narrative progression of a collection, directing readers to where their attention should sharpen and focus.

Repetition, a cousin to obsession, is truly one of my favorite poetic devices, and the two collections here use it to brilliant effect, evoking very different tones, styles, themes, and moods. Each collection is expansive yet circular; somehow, they complement one another in a beautifully unintentional way. It’s rare to read such disparate collections back-to-back and feel as if that’s the way it should have been done all along.

Sun Yung Shin’s fourth collection, The Wet Hex (Coffee House Press), is truly astonishing and one of the best books I’ve encountered this year. It is unapologetically rebellious and experimental and features a poet writing with maturity, boldness, and confidence at the height of her career. I could spend this entire roundup writing about it and not even scratch its surface, so I’ll carefully unpluck one gleaming thread from the tapestry for us to follow.

Shin, a Korean adoptee, builds upon work from her previous collection, Unbearable Splendor, using poetic forms, etymology, visual art, and symbols to explore the dual concepts of “orphan” and “castaway.” She described her fixation on the word “orphan” in a Chicago Review of Books interview. Although she was speaking about Unbearable Splendor, her words are resonant of my experience reading The Wet Hex:

“Orphan is a gorgeous word. Sublime. The first syllable or reminds me of gold ore, or simply the word or, which means the possibility of alternatives, the certainty that another choice is to follow the little word or. English has so many of these tiny words that mean so much — and, the, an, if, so…”

In The Wet Hex, Shin stitches a familial and cultural identity from bits and pieces of DNA tests, Korean history, and folklore. In “An Orphan Receives Her Commercial DNA Test Results from Two Companies: An Abecedarian,” she writes, “How is a child’s globe a work of colonial conditioning?” And in “An Orphan Considers the Hand of God,” she mythologizes the importance of names given, taken, forgotten, and lost:

“Fires burn, feed on the names of the renamed.
The golden threads of our ancestors make a ball of snakes.
Births of thousands in lightless hungry places,
Where names are expensive, where gods are for the rich.”

In the book’s third section, Shin unlocks a different door to the concept of abandonment in a collaboration with artist Jinny Yu. Together, via a series of poems and drawings, they re-envision and reclaim the Korean tale of Princess Baridegi, foremother of shamans, the seventh daughter of a king, who was abandoned and later saves her father in an underworld journey. These poems strike at the heart of the rot of patriarchy, misogyny, and control, and shine a light on the castaway who refuses to be disappeared even inside a story of a story, one in which the orphan wields the true power:

“If you would be well, your daughter must make a journey to the underworld. There she must obtain holy water and bring it back to you./But are you ready to be well?”

Amali Gunasekera’s second collection, The Golden Thread (Bloodaxe Books), could not be more different from The Wet Hex, yet it was the perfect book to fall into after the ferocity of Shin’s masterful creation. Reading it was a transition from exhilarating to tranquil — like letting out a slow, meditative breath after holding the air inside you for longer than you thought possible.

The Golden Thread is comprised of interconnected prose-like poems written during what Gunasekera describes as “a period of deliberate silence I like to think of as [my] ‘Walden Pond’ years.” This sentiment, written in an acknowledgement at the beginning of the book rather than in the back, sets the gentle tone of a collection that often evokes the feeling of floating in a calm body of water.

The poems are written in an easy, conversational style, the poet musing on quiet, everyday activities. Turtles turn up repeatedly, which I found charming and striking. I don’t often encounter turtles in poetry, and it put me in mind of having recently watched two smallish turtles at a botanical garden pond with my toddler. One sunned itself on a rock while another swam slowly around the rock before eventually climbing atop its companion’s back, almost as if in a hug. It was endearing and peaceful, exactly like Gunasekera’s poems (many of which are untitled): “Sometime later I dived off a boat and swam/for what felt like hours in blue silence with a sea/turtle. Its slow rowing. My marveling.”

I also found myself taken with the different birds that appear throughout — sometimes scattered, sometimes placed within stunning metaphors:

“All the people we’ve loved are like high
praises small enough to be palm-cupped like a snow-
globe. They are all there, tiny black swans on a frozen
lake beyond the mapped world.”

This collection holds so much of what it means to be human in the world, to find our own ways to feel within the collective, both as an animal and as a part of nature. “As the ocean accepts rivers or/rain, each of us accepts love differently, and sometimes/we are unable to receive being too full of terror of/the thing asking to enter us,” Gunasekera writes in a series of poems set around the concept of the “Beloved” and the terror, the exhilaration, of the heart’s strength and vulnerability.

The Golden Thread is so wholly, so beautifully realized that it’s the perfect prelude to summer’s beginning.